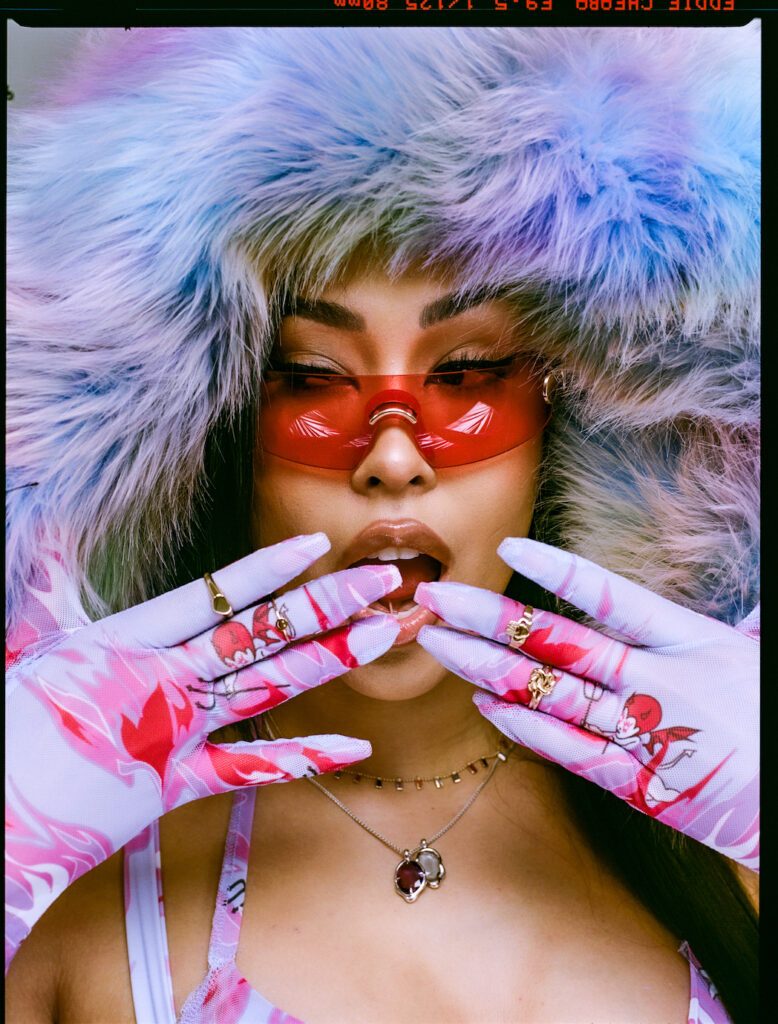 London presenter Snoochie Shy caught up with VIPER for our print issue to talk about her new BBC series, being an ambassador to Hoodrich and of course… Magnum the cat.

You’d be hard pressed to find a UK talent more entertaining than Snoochie Shy. Repping the UK Hip Hop scene on the radio waves via 1xtra and alongside Poet on Yo MTV Raps, she’s the go-to girl for laughs, not to mention playlist gems. With a new TV presenting job on the horizon and Wireless festival appearance, she’s set for a big Summer. Fresh from an appearance on ITV’s I’m A Celebrity, Shy was exposed to a wider audience in late 2021 which lead to her revealing her facial birth mark. Having covered it up for her whole career, showing it brought her a newfound confidence. She discusses this with VIPER, along with her most embarrassing moment on radio and her upcoming BBC show.

How is Magnum the cat?

Magnum’s alright actually, he’s just sitting here chilling with a pink bandana around his neck, that’s his new vibe. It’s between his bussdown Magnum collar from Amazon Prime and a pink bandana, but yeah he’s alright. I just came back from Portugal so I wasn’t here for the last week and he’s currently in the place where he’s biting me – he’s not over the fact I left him but he seems to be chilling out now.

Did you get him any gifts in Portugal?

Not really, he’s quite bougie though, a lot of the time I have to make his food, so I could have made him some Portuguese food but yeah I just got loads of alcohol – not for the cat.

You’re the face of the new Hoodrich Women’s line, what’s the link up been like so far?
They reached out on instagram then sent me an email, and we had a conversation about it and I thought it just made sense really. I love their track- suits anyway and I looked at the womenswear collection and I just thought, “this is a collection that I would definitely wear.” On top of that, they allowed me to have a say in what I wanted the shoot to be like, or what would happen on the shoot as well. It seemed like a really good fit to be honest, they’re a great brand. It’s been cool and definitely fun seeing the pictures in JD and stuff – like what the fuck!

You’re as known for your style as your work, but was this the first time working with a streetwear brand?
I’d worked with other streetwear brands before on campaigns, but this is the first time I’m working as an ambassador as well. As it’s their first women’s collection, I’m the first ambassador of Hoodrich Women so that’s been really exciting, before I’ve just done a campaign and it’s been like modelling but now I can own it a bit more as an ambassador, it’s fun.

Is this an area you want to explore more, being a brand ambassador?
Yeah I think so, obviously this is the first time I’ve been an ambassador, but it’s exciting and I’m a little bit of a control freak as well, so I feel like it’s perfect for me, I like to know everything that’s going on, so the fact that they allow me to have the direction for the shoot and other stuff I get to do as an ambassador, it works perfectly so it’s definitely something I’d like to explore more in the future.

Tell me about your new BBC 3 Show to be released later this year.

It’s called The Career Game, that’s still a working title but that’s the final one. They’ve had three different names for it and I think that’s the last one now. It’s been announced and I think it comes out in July some time, it’s a really fun show, it’s my first time presenting a BBC show as well and working with the team was really good – I feel like it’s a younger version of the Apprentice; we have different industries like luxury estate agencies, we had radio producers as well, and they basically do the maddest job interview of their life – the candidates go head to head and at the end of it, one of them gets the job. It’s been really fun.

You’ve got experience in radio production too, did it help having your own insight?
Yeah 100%, I think that because I have a background in radio as well, definitely the one in radio production was my favourite episode to film, just because I feel like I know radio so well. Also the candidates all want- ed it so much. With that one, when the person won the job, I definitely started crying and we all started crying. So it was quite emotional actually but it was really fun and I felt like I could give quite a lot of advice. With the luxury estate agency, that was interesting ‘cause I had no idea so I was also learning as I went on, but with radio I was able to give prop- er advice about it, it was good.

What jobs did you have before you got into this career?

Well my first job was working for RWD magazine as a fashion stylist, then I realised I can’t style anyone, I just dress people the way I dress and not everyone wants to dress like me. When I finished that, I worked in retail at Topshop – to be fair though I made a lot of my friends then ‘cause a lot of my best mates worked with me in Topshop. The shift was quite hard when the sales happened and people would just dash things on the floor; that was quite a lot. I feel like it was good anyway, I met so many people there. It was at the Stratford Topshop when it first got built, so I had to help set it up, that was a bit crazy.

You’re back on MTV with Yo MTV Raps Rated, what was the highlight of shooting the new season?
Just shooting the show with Poet – Poet’s one of the first people, if not the first person I ever met coming into the industry ten years ago. I re- member when I met him, I was literally star struck, because I used to post him on my Facebook all the time, all these old YouTube videos. When I first met him, I was so shy but I was a little bit fan-girling and I think he thought I was rude at first cause I was so shy that I wouldn’t look him in the eye and now he laughs about it. To me it’s full circle, because I get to host the show with him, and it’s all about music as well which I love, and we just go there and piss about really – we do our jobs, but at the same time we are literally nightmares and I think the team are a little bit like, ‘come on, you’ve gotta work now’ because we’re cracking jokes between scenes and stuff. It just feels like going to work with your best mate so it’s quite fun actually. He’s like my big brother, I will say that. We had M Huncho on recently and he just came in to take the piss out of [Poet]. I think he got called a Cheesestring; there was a lot of beef going on, that’s my highlight.

You’ve always been very open and shared a lot with your followers, but do people tend to overstep the mark and get too friendly sometimes?
I feel like the weirdest thing I get on social media – each to their own with kinks and stuff – but I would say the craziest thing I receive seems to be about my feet, there seems to be some kind of fascination with my feet. I did have a Wikifeet page before I had a Wikipedia page as well, my feet get posted on Wikifeet and people rate my feet. There are quite a few votes that said that my feet are ugly, but that’s fine. But every time I up- load a picture where my feet happen to be in it, it gets cropped and up- loaded to Wikifeet. Other than that, probably a comment when some- one said they wanted to suck a fart out of my arse, things like that. I’ve gotta say, what the fuck, it’s a little bit mad. But yeah there’s definitely some kind of toe fetish going on which I don’t really get, my foot’s like a size seven as well. I’d say the foot fetish thing but the craziest thing I’ve seen – it’s not weird, but it was some graffiti at Oxford Circus in the tube and it was a massive graffiti mural and it just said “big up Snoochie Shy.” That was quite cool actually.