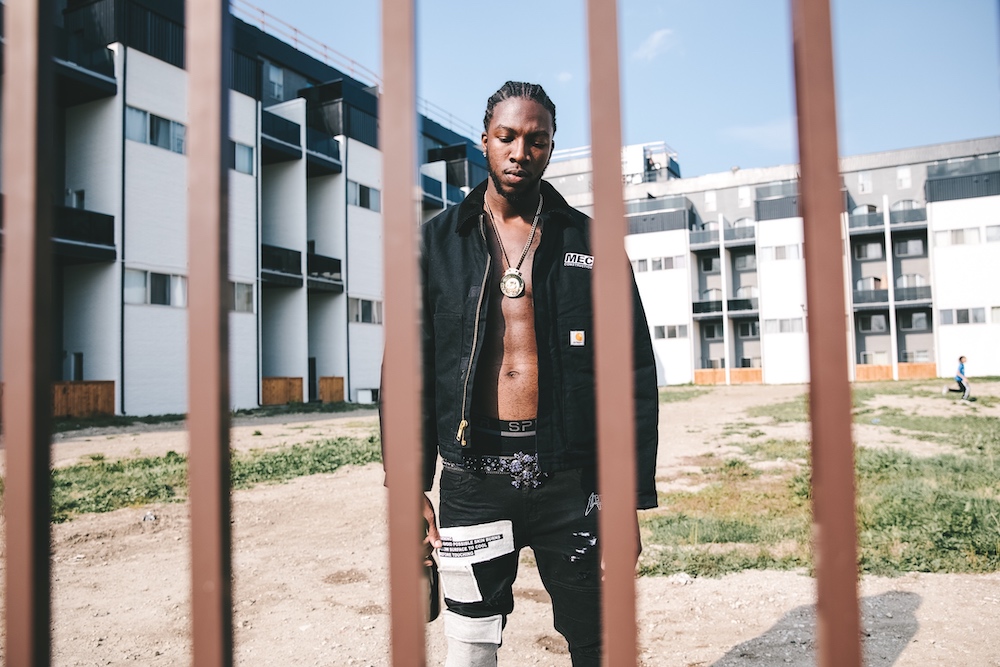 Viper sat down with Wave Montega to chat about his journey so far, what it was like growing up in Toronto, and of course – his music.

Who is Wave Montega?

I could say so many things, but I’ll always say I’m like an 8ball. The last to go but the most important to win the game.

How would you describe your sound and the music you make?

Some of the earliest memories I had growing up in a Jamaican home is listening to dancehall/ reggae artists like Vybz Kartel, Warrior King, Sizzla, and hip hop artists like Aaliyah, Fabulous, Biggie Smallz out [of] my mom’s CD collection.

Explain what life is like in Malton for those who have never heard of it.

Malton is an area on the border of the west end of Toronto. It’s always been rich with culture because of the melting pot of backgrounds. Malton always been known for hustlers and basketball. They call it Money Ave so you can see why I say we’re well known for getting money. We’ve always been lit at basketball too, with some of the best hoopers in Canadian history coming from there. Even if you didn’t come up playing ball seriously, you’re probably pretty good because it’s everywhere. In Malton, it’s a small community. Everyone knows everyone.

How has growing up in Toronto influenced the sort of music you create?

Growing up in the city is a very unique experience, especially because we have a ton of different cultures. There’s Caribbean, African, Asian, and so many others. Also growing up specifically in Malton, somewhere that has its own identity aside from other places in Toronto. That alone is a reflection of myself and my music.

From ‘Still Wavy’ to ‘Catharsis’, what has the creative journey been like for you?

‘Still Wavy’ was the mixtape that introduced me to the music scene. With ‘Catharsis’, I was intentional with the cohesion, theme and overall sonic consistency because it’s an album. All the voice notes, and sound bites throughout the album were real original clips from videos and audio clips I’ve accumulated intentionally for the past 3 years. Executively produced by Godflow, ‘Catharsis’ brings you into a world and keeps you in it from top to bottom.

“Hair long like Jesus” — where do you draw influence from with respect to your appearance and fashion?

I draw influence from the Y2K era for the most part, but besides that I like what I like and try to do things that other people haven’t done, because I don’t like to be or look like anyone. I push boundaries sometimes just to separate myself.

Where do you think Canadian rap is compared to American rap on the global stage?

The Canadian rap scene is new compared to the American scene and needs more infrastructure for artists to do their thing successfully. Canada needs more black representation in executive music spaces so that our music can grow in the way it needs to. Canada needs to support their own artists instead of wait for them to be known elsewhere first, and Canadian artists also need collaborate more.

‘Side Bag’ is my most important song so far because it’s the song that I’m most known for as it blew up in 2019. However, my personal favourite song is ‘Painful’ off of my album ‘Catharsis’.

What have been your biggest influences outside of music?

I’d definitely love to collaborate with more UK artists. Unknown T and Skepta are two of my favourite in the UK and their sound definitely resonates with mine on a level. My dream collaboration would be with Max B – he’s one of [my] favourite artists.

A thank you to everyone who’s listened and streamed ‘Catharsis’. I’ll sign off by saying to tune in for 2023. I’ve got big things coming.