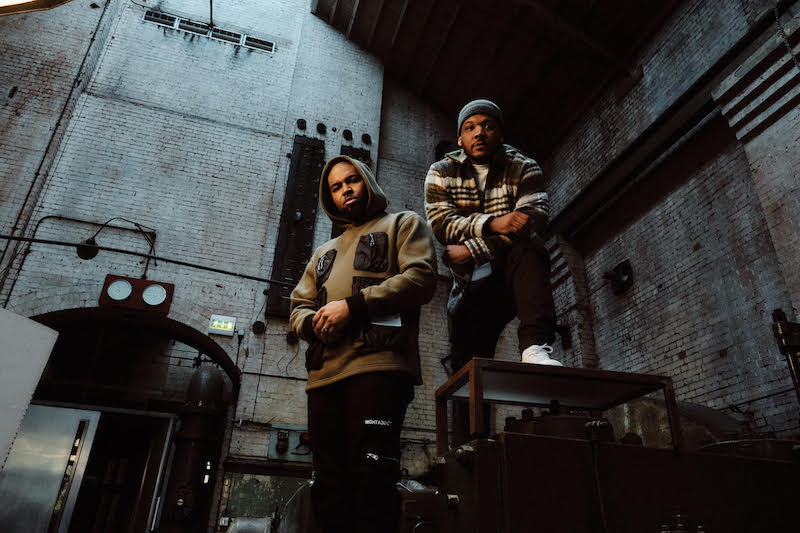 From Funky House beginnings production duo iLL BLU have established the perfect Drill fusion sound. Read on to find out how they complement each other’s sound and how they brought the scene together on ‘The BLUPRiNT’. London’s iLL BLU have worked with some of the biggest names in today’s British music scene, but it all began in the days of UK Garage and Funky House. They explain how they each compliment the other’s production style, ‘The BLUPRiNT’ Mixtape and collaborating with overseas artists.

What songs from the project do you think will have people hype this summer?

Darius: You got a record called ‘Talk To Me’ with Sneakbo, Donae’O and Aisa, that’s a banger. You’ve got another smooth one, ‘Burn One’ that has Loick Essien, 169 and Wretch 32. Those two are definitely bangers to watch out for and we’ve got a special one we’ll be dropping that’s a surprise for the people. We won’t tell you who’s on it, but it’s a big surprise.

It’s good to hear new music from Loick Essien, how did you get him on the project?

Darius: He’s our guy so we were in the studio vibing, he laid the hook and we was like, “We really like this record, this could definitely work for us on our project.” We asked 169 ’cause we like his vibe as well and then we had a session with Wretch and were like, “What do you think of this record?” And he done his ting on it, that’s how that came about. But Loick’s our guy, we’ve done quite a few sessions with him.

You’re very versatile as producers but you’ve kinda boosted the UK Drill x Garage sound, do you think that’s something people attach to you?

Darius: There’s a mix, we’ve definitely got a few more of those mash-ups or fusions with Drill and Garage. But then there’s Afrobeats on there, there’s some House record on there that harks back to our Funky days so it’s a mix of everything we’ve done on our journey. It’s just bangers though, everything is bangers, it’s all set out like a musical journey for you to enjoy like a rave.

Nothing but vibes, is this the kind of project that you put on in the party and can play it all the way through?

[One of their managers comes on screen] I’m jumping in! These man are the fucking best producers that I’m hearing. I’m one half of management and these man are so humble, it’s so fucking amazing. Been in the business for over 10 years, multi-genre, they’ve dropped their debut project, they’ve got some amazing things happening on there and they’re just way too chilled about it! [Laughs] Guys, this is the moment for us! This has been an eight year journey!

James: Even though the clubs are closed, you’ll get down with this project, basically. So a lot of the records you’ll hear on this tape are rave orientated.

That’s the vibe already, with ‘Magic’ and ‘Dumpa’, despite the pandemic.

James: Imagine the energy you’ve got with ‘Dumpa’ is the maximum, the ‘Burn One’ record is still energy. It’s still something you’ll hear in a club but like mid-tempo, it’s still a vibe. Every aspect of our music is to aim to please, to party, to feel good, to vibe, that’s the overall feel of our tape.

The formula for Dumpa is perfect: two great MCs, a Vybz Kartel sample, female vocal and a heavy bassline. Do you agree, or what is your formula when you start creating a banger?

James: There is no strict formula. When you break it down like that, it can seem formulaic but we had two views. One, what would Vybz Kartel sound like on Drill? That’s where it started, then we found that sample from ‘Dumpa Truck (Smoking Riddim)’ and then we produced the beat around it. 2010, 2011 when Vybz Kartel and the whole Dancehall movement at that time was huge, we were DJing at that time and we could see what was happening. When we came to do the fusion with Drill, we added Vybz Kartel and then we were like,”this is sick, yeah this works.” Then we were like, “Can we put vocals into this?” That was how we sculpted that track, it wasn’t like,”We’ll do this and then do this.” The song was just a feeling and the general idea of trying to do something different.

Darius: A lot of the tape is more about feeling, rather than it being orchestrated a certain way, like “Put this here, this here.” It’s all about feeling, this new stretch of music that we’re making, it’s all about feeling. Because we’ve come from making Pop, where it feels like “this has to go there, the hook has to go there,” it’s too manufactured. I feel like a lot of the urban stuff, it’s more about feeling and it brings us back to our Funky days when we first started making beats together, when it was all about the feeling; It didn’t have to be the same structure as popular music. Dropping ‘Magic’ and dropping ‘Dumpa’, we’ve seen what it does to the general public and what they’re feeling, so we can build on those records.

Even when you work with Drill artists, you create more of a fusion sound with other genres. How have you managed to commercialise Drill in a positive way and turn it into something that could be Pop?

James: I think some people see something that’s popular and try to take from it, we haven’t taken from it, we’ve added to it. I feel like off the back of ‘Magic’, we’ve had ‘Dumpa’, it’s going to inspire people that are already in Drill – producers or artists – to further their production skills or their creative skills to where it’s more than just Drill music, but can become whatever you want it to be.

Tell me about producing as a duo, especially when you’ve made beats solo. How do you come together and blend sounds, does one make a beat and you then add to it together? Or do you make all the beats together?

James: Like you said, we may produce something individually. I may hear something that Darius produced and go, “that’s great, I think it just needs a few additions here, or maybe remove this or I can do the drums better, or it needs a bassline” and vice versa. That’s changed over time where in the beginning we were in the same room, we had the time, it was more of a hobby – I’m on the drums and Darius is the bass or vice versa. But as we’ve grown, families, schedules, things change so now we work more individually when we’re creating tracks, then we go into the studio and finish. Definitely when we’re in the studio with the artist, it’s all about collaboration with the artist, talking through things, arranging things, maybe even change the beat after, that’s happened a few times. It depends but mostly we’re talking and emailing ideas back and forth to each other.

Darius: There’s one rare occasion, recently we did a record and that was the first in a long time that we’ve been in the studio and made the beat together. That was nice, it brought us back to our old days.

James: One thing I’ve learnt about myself as a creative is, I like my own space because sometimes you just need to get your original idea out first. Because sometimes when you’ve got somebody there and they’re trying to get their idea out. You’re just always having to compromise so sometimes it’s just good to get that idea out so then you can go, this is what you’ve presented, cool, now let’s see how we can improve on it. That’s how it’s worked out.