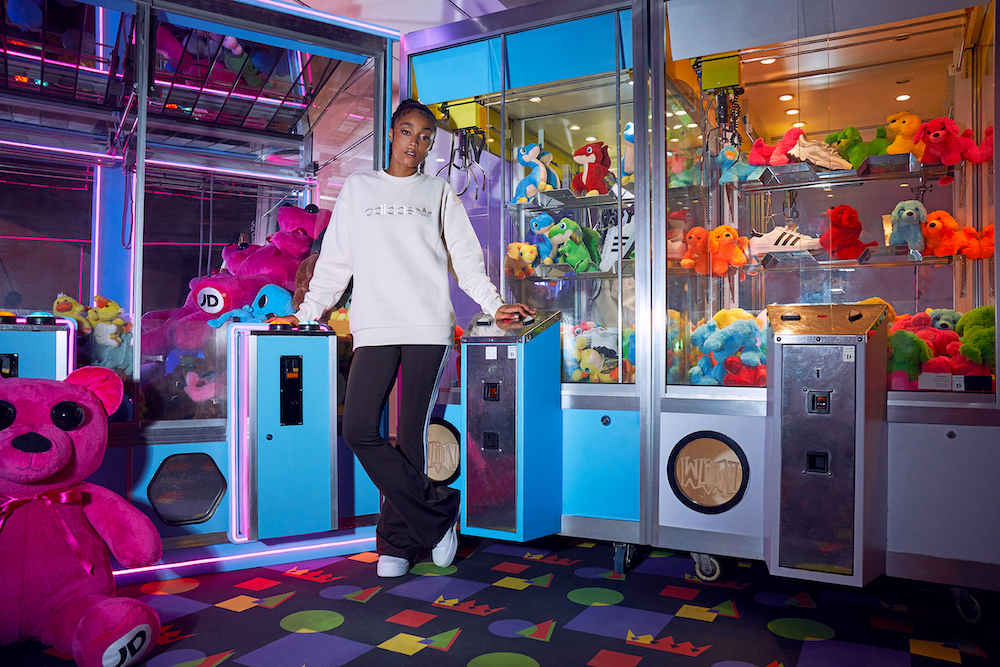 VIPER’s founder Lily Mercer spoke to London actor, Jasmine Jobson on the set of the JD King of the Game Christmas campaign. We’ve got interviews with the stars of the advert dropping on site every day until Christmas, stay tuned for chats with Ojerime, Fumez and more…

What would your dream role be?

I’d have to say something like Marvel or DC. I’m always looking to stretch myself and show how versatile I am as an actor. I feel like I achieved that in the recent series of Noughts & Crosses, so it’s just a matter of continuing to push things a little bit further and to see how far I can go. A great character in a Marvel or DC production would be getting there.

What would your secret power be?

I would be selfish and want loads of different powers. Having a career and auditioning, it’s very difficult to be in 100 places at once. Having such a tight schedule is difficult so if I could teleport, that would be lit because then I could always get from A to B. I would also need the power to be able to go back in time but only for work purposes so I could make sure that I never missed a meeting. To be able to fly, I don’t like walking, traffic is a pain. If I could fly to work, it’d be so much easier. Reading people’s minds as well, I would love to know what people are thinking but then I think it could also be a very big problem too!

Was acting the dream from a young age?

Yes, my mum caught me in a mirror fake crying when I was three or four years old. From then she knew I was a drama queen. I’ve been doing performing arts from very young, I was Mary in the nativity play in year one and I played Romeo in my year six play. I’ve always been in lead positions, so I’ve known that performance is for me since four or five years old.

As it was clearly a successful mission, what’s your advice to young people who want to get into the same?

You need to be tough, this industry isn’t for the faint hearted. You need to be able to pick yourself up when you’re down. You have to take your knocks and not take them as a loss but take it as a lesson. You might get a few Ls but it’s not a loss, it’s a lesson so you learn from it; you do better and you come back 10 times better. Have fun, be passionate, be proud of yourself, be confident. Don’t let nobody tell you no and every no, you’re getting you’re one step closer to getting a yes.

What is your earliest memory of JD?

It’d be going through Camden or Kilburn with my mum and we’d walk past JD. It always looked so glamorous, they’d have people in the windows and always had fancy shoes. I was that kid that couldn’t really afford the latest pair of trainers so when you’d see them, you’d fall in love and you’d always want them. My thing was Superstars, I was absolutely obsessed with the shell toe, there’s something that it does to me; it’s beautiful. They’re so comfy and they go with everything. I remember when my mum got me my first pair, from then it was curtains.

What would your Christmas Cracker joke be?

I’d probably be one of them, “Why did the chicken cross the road” jokes? I’m really funny, but I’m also pretty dry. It’s so horrible to say.

Are you an overly competitive person?

How important was that spirit when you were growing up and starting out in the TV/film industry?

Like I said, you don’t accept a no. I’ve 100% taken that with me, even when it comes to auditioning for roles, it’s a competition between you and whoever else is going up for it. So it’s about showing that you are the best.

Any games that you can’t play anymore because the loss was way too painful?

Yeah, Monopoly. We can’t play that at Christmas anymore because it gets very, very aggressive. I remember one time my sister flipped the board and people lost their hotels and stuff. We had to figure out where our hotels were, it gets a bit heated. I might try to bring out Monopoly this year and see how we do; we haven’t done it in a little while. And Dominoes, it’s a Jamaican household so the table is getting shook. It’s crazy, you can’t let anybody see your Dominoes.

I would like to say all the time but that would be a lie. My happiest moments would have to be when I’m chilling at home, feet up on a sofa watching a movie, snuggled up eating loads, on FaceTime to my niece. The number one is when I’m with my family, that’s the best. I’ve got a three year old niece, she’s absolutely stunning. She is so funny, she used to call me “Adidas” for auntie Jas. She’s my absolute world, anytime that I’ve got a little bit of freedom. I’m straight to her and my sisters.

She’s gonna see you on TV in the ad!

She saw me on TV not long ago when I presented an award for the BAFTAs, it was so cute. I’ve got a video on my phone, she was pointing at the screen like, “Mummy, look, it’s auntie Jas. Hi, auntie Jas!” She got all confused but she’s still young, she’s trying to understand it all but she’s starting to recognise now.

What is the most important lesson that life has taught you?

To ask for help, we’re so independent and so focused on getting things done and we move so fast that we don’t actually take the time to ask for support if we’re struggling. I feel that’s something we need to do more and I’m the first person to jump straight on the phone. I’ll be on the phone to my agent like, “Listen, I don’t know what to do. I need your help. How do I go about this?” Because I want to make sure that everything’s perfect and if you don’t ask, you don’t get. If you’re going through something and your head’s in the wrong place, ask for help. It’s not that deep to ask for someone to reach out, sometimes it’s just a cuddle. It could be a vent or you need help breaking down your plan. Right now I’m decorating my house, so it’s like, how do I do this? I need to move out for a short period of time but then how do I make sure that everything’s all structured? It’s about reaching out and getting somebody to sit down with you and break it all down, having a guideline, so you can stay on track. Having too much pride will hold you back sometimes. At the end of the day, as much as we’re all independent, it takes a collective of people to come together to make something special. It’s not just me, I’ve got my agent, Becks, I’ve got my agents, Billy and Hillary, I’ve got my voiceover agents, I’ve got an agent in America. We come together collectively as a team and we work together very well. That way, I’m able to give the best work that I can possibly give and that’s literally what it’s all about. You’ve got to make it all work so ask for help, there’s nothing wrong with having a strong, big team.

If you were an Adidas trainer, which style would you be?

Superstar all the way, I feel like the Superstar is like an onion. It’s got so many different layers, especially with the whole shell toe effect. It’s not just a standard trainer, there’s a lot to it; it’s got a lot more personality.

I wouldn’t say you’re necessarily tough but I feel like you’re perceived as tough by people, you’re like a shell toe.

Yeah I’m a tough cookie but I’m definitely a little softy. I’m not one to be crossed, if that’s the correct way to put it. I need to tell myself that I am the best thing since sliced bread and make sure I champion myself and blow my own trumpet sometimes, otherwise you tend to forget. I’m such a humble person that I tend to not acknowledge the great things that I’ve done. Sometimes it’s about taking a step back and just looking at everything that I’ve achieved over this time and being like, “I am actually really amazing. I’ve done really, really well.” I need to be proud of myself and take a second to be like, “you’re winning right now, babe” and appreciate those wins. You look back like, I’ve done all of this, what have I done to actually appreciate what I’ve just done? Sometimes it’s about going on holiday or sitting with your niece for a week.

What are your style essentials?

It has to be a pair trainers, I love me some trainers. I’m a tracksuit girl so you can’t go wrong with your hair up in a bun, a tracksuit and a pair of comfy trainers. I grew up being this tomboy, you would never catch me in a skirt. You can never catch me in a pair of shorts or anything like that. Then I reached my teenage years, I used to walk out the house in men’s boxer shorts. I was that proper tomboy, thinking I was some gangsta and then I just switched it up like, “I want to wear a dress, I want to wear heels” and I was in heels every weekend. Aaliyah’s always been a massive idol of mine. I love her swag and she’s absolutely amazing. So it could be tracksuits or dresses and heels but at the same time, [there’s] nothing wrong with a pair of combats, T-shirts, trainers and a bralette.

Do you still try to incorporate streetwear into your red carpet looks?

100%, I went to the House of Dragons screening and I was wearing a red tracksuit; I’m all about comfortability. Sometimes I feel like it’s necessary to be glammed up and I’m not really the type of person that likes to be glammed up all the time. As glamorous and as beautiful as I look on the red carpet, that’s not me 24/7. I like to be fresh faced, no makeup, comfortable and chilled out. Even if I am dressed up, I keep it very natural and I try to keep that fresh faced, natural look as much as possible.

What’s been the best part of the JD shoot?

The best part is shooting in the arcade, it looks really cute; very intimate. It’s nice, I’m excited to get cracking. I want to play, I haven’t been to an arcade in ages.

If you were given a retro arcade game for your house, which one are you picking?

I’m one of those girls that jumps on Super Mario so bring me a Pinball machine or Crash Bandicoot.

Watch Jasmine Jobson in the JD Christmas campaign ‘King of the Game’, with JD exclusive product drops available online at jdsports.co.uk and in stores across the UK now.