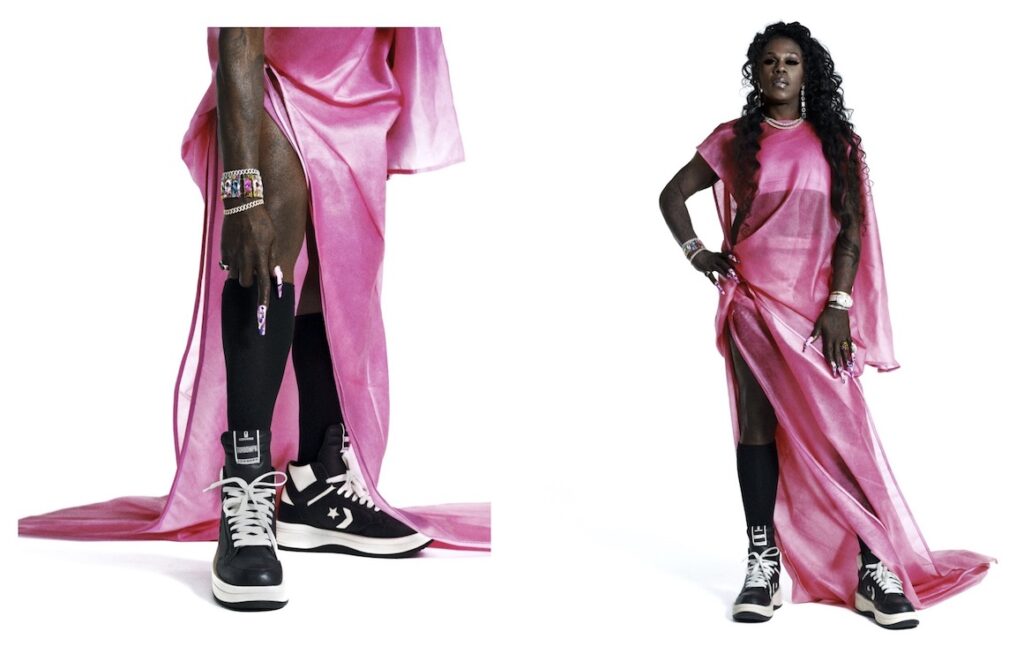 Converse and DRKSHDW continue their distorted reinvention of iconic silhouettes, this time delivering a new TURBODRK Chuck 70 colourway along with the return of the sought after TURBOWPN. The TURBODRK Chuck 70 stretches the possibilities with an elongated tongue, adding a bold zebra-inspired jacquard finish and the signature square-toe. The TURBOWPN now features a two-tone look in the signature DRKSHDW palette and takes the proportions of the legendary Converse Weapon to another dimension.

Owens has always held a distinct connection with Converse and it first led him to introduce the DRKSHDW SS14 Ramones, a subversive interpretation of the Chuck Taylor All Star. In order to celebrate this new launch, the brands returned to the common inspiration of music. To that end, Owens has personally curated a playlist which he describes as embodying “SCRAPPY TRANSGRESSION,” available now on Spotify. (NOTE: You’ll have to login to listen)

As part of the launch campaign, Converse and DRKSHDW have also invited in the legendary ambassador of New Orleans Bounce music, Big Freedia. Owens shared, “OVER 10 YEARS AGO, I WAS FRUSTRATED THAT THERE WASN’T A SLEAZY DANCE CLUB WITHIN WALKING DISTANCE FROM MY HOUSE IN THE 7TH ARRONDISSEMENT OF PARIS SO I DECIDED TO START ONE MYSELF. I REACHED OUT TO BIG FREEDIA TO COME PERFORM BECAUSE I WAS EXCITED ABOUT THE NEW ENERGY AND ATTITUDE I HEARD COMING FROM THE NEW ORLEANS BOUNCE SCENE…NOW, 10 YEARS LATER I HAVE ASKED HIM TO REPRESENT MY COLLAB WITH CONVERSE TO CELEBRATE HIS ENDURING POWER AND FEROCITY IN AN ALL TOO OFTEN NARROW AND JUDGEMENTAL WORLD…”

The TURBODRK Chuck 70 follows Owens’ practice of confident contortion of cultural signifiers and his distinct choice to bend and reshape the canvas shoe. The TURBOWPN, is a bombastic take on the Weapon, elevated through Owens’ minimalist yet maximalist footwear aesthetic – most notably distorting and exaggerating proportions while honouring iconic details.