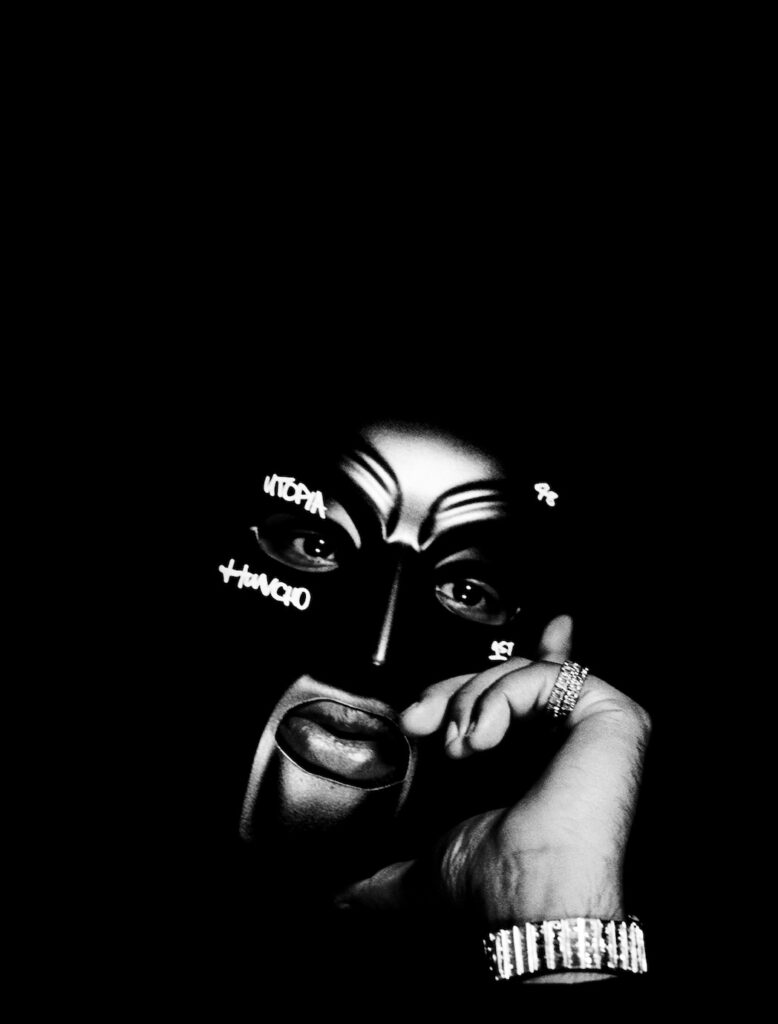 One of the UK’s stand out talents in music, M Huncho appears in VIPER’s print issue to talk about his debut album, new mask and upcoming Alexandra Palace show...

Fresh off the release of his debut album, ‘Chasing Euphoria’, M Huncho is in his element. With a new mask crafted by artist and skateboarder Lucien Clarke, a new era has begun, and with it, the north west Lon- don rapper has tapped into the core of his artistry. Tackling subject matter such as culture clashes within relationships and other relatable issues faced by his loyal fan base, there’s a newfound depth to the writing he has recently show- cased. After a brief hiatus from releasing music, he has returned with an intimate body of work, which peaked at number five in the UK charts. He talks to VIPER about his forthcoming Alexandra Palace show, collaborative projects and how his heritage inspired his sound.

On your debut album, ‘Chasing Euphoria’, you’re on a journey to finding yourself. When did this theme start for the album?
I just felt like the whole COVID period, the two years that we went through lock down, it kind of made me reflect a bit more on music and content; in terms of what I’m speaking about and where I’m headed, what direction I’m going in. Especially, if I’m given a debut album – as an avid music listener and someone with great taste in music – when people release debut albums, I expect to learn things about them that I didn’t know. That’s something I wanted to capture to the tee and I feel like I’ve done it. So yeah, I have been thinking about it for a while, albums are meant to be special and pivotal moments in terms of content and what you’re speaking about. It was special even just making this album because that’s what it was about, getting the right content out there that’s relatable and also for people to understand that, “yeah, this guy’s also human, even though he looks like Batman.”

How long were you sitting on these songs, were they all from pandemic times?
Everything’s brand new – I feel like entering into a debut album, there’s no baggage you should be carrying – in terms of old music – onto something that’s basically not even a new chapter. In essence, it’s a new book. That’s why I had to take that fresh approach to it with a fresh mind and a fresh idea of what I need to speak about and how all my production should sound. I had to keep everything fresh, beats from scratch, writing from scratch, everything. Mainly because, if I was to incorporate music that I’ve got sitting in the archives with my album, it’s just gonna sound off. It’s going to sound like it’s coming from two different people and I feel like at this point, especially with my debut album, I had to have a very grown up approach to it.

It does feel like a new era, obviously you have the new mask as well which has tributes to your previous projects. Does everything feel like a fresh start?
100%. I felt like even the new mask and having Lucien involved in making it puts a sprinkle of speciality in it because it’s something that’s not done all the time. Especially in our scene where everyone wants to wear a mask but the majority of them haven’t created a brand or an identity. I feel like I’ve got an identity within the game and I’ve got myself, I’ve got my sound. I’ve got a core fan base that always rocks with me, I’ve got North West London – where I’m from – that rocks with me. As long as I can make my community rock with me, the world will follow on. With the mask, changing it, giving it into the hands of Lucien for him to come up with this, to me, I felt like this is like a way of me going into beast mode or going into a completely different mind frame and work ethic. So now that I’ve dropped my debut album, I don’t think everyone is ready for everything else, I’ll be honest with you. But I’m about to flood everything so you better be ready, you better have a boat or something, a floatie to stay afloat because this wave is going to be dangerous.

Any secrets I’m allowed to hear?

I’m just gonna say from this debut album onwards, I’m going to be very loud and very active in this music scene. I felt like, I’m this type of person that’s kind of come and gone, [then] come and gone. But I’ve always managed to maintain myself, my fan base and listeners, people still listen and people still look out for my music, and so on and so forth, which in this day and age is so hard to do. I can name countless people that have come and gone, so for me to even come off the back of that and drop a debut album and get a top five – not that I care about the charts, but my team is over the moon and I’m happy for them, because it’s an achievement for them as well. I feel like it’s not really possible in our scene anymore, where musicians are leaving the game for a long period of time, not releasing a solo project and coming with a debut album and still getting the top five. So yeah, I’m proud.

Do you feel a bit like you’re an anomaly in the scene?

I didn’t come into the scene to fit in, that’s the first thing. My intention was never to fit in, as you can see. But I’m very very north west, I’m patriotically a north west Londoner. Everyone from north west is proud to be from north west, the same way south Londoners are so proud to be from south London. north west London, people are proud of where they’re from, because north west London, especially the borough of Brent is one of the most multicultural boroughs in the whole of London, maybe in the whole of the UK. Just relating to different people from my area, we all have similar stories; if I touch on certain things in my music, people from my area are relating to it because they are from where I’m from.

You speak about love and you speak about culture clashes, which a lot of people in London can relate to.
Yeah and it’s not the individual’s fault, I guess it just comes down to the fact that coming from a multicultural area, a lot of people, if they’re not first generation, they’re not even first generation. So their parents have come to this country from a completely different part of the world and all they’re used to is, you can only marry someone from the same culture as you. But in my eyes I don’t see different cultures as barriers, I see them as points to grow from and under- stand different people. Where I’m from has made me understand so many different types of people coming from so many different types of backgrounds. The one thing that we all have in common is we’re all sons and daughters of immigrants, so having that common factor between all of us means that we can all relate to each other? People think that we’re so far apart from different cultures. But in reality, we all have very similar cultures, it’s just that people are different and you can’t judge the people for who they are. Culture is definitely not a barrier. Especially when it comes to relationships and things like that, it’s always a point to grow from and to understand one another. I feel like people from my generation understand never to limit their children to have that mindset. Because from that mindset comes a lot of negativity, it will have a negative impact on the child or even  on themselves, you know – people telling their children not to marry someone because they’re of a certain race or from a certain country – that’s unacceptable. Because what’s the point, isn’t the point to be integrated and to have children that come from so many different mixes? That’s the beauty of culture and religion, that’s the beauty of watered down things.