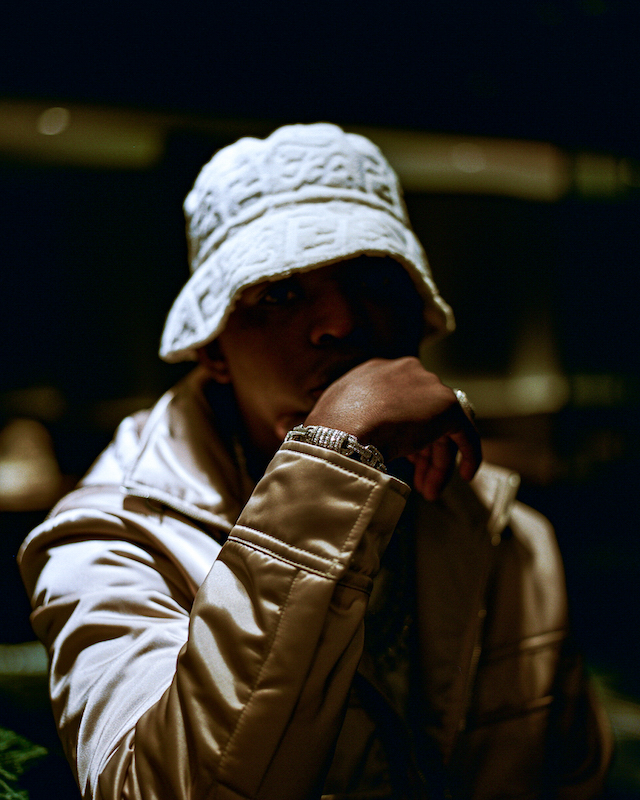 BLEU is your solution for those down days; those days when you’re feeling quite literally, ‘blue’. Following the release of his new track, ‘Love In The Way’ with Nicki Minaj, VIPER talks to the Alabama singer songwriter…

It’s mid-afternoon and the summer heatwave has left London in a hot pot of sticky bodies all packed onto the central (‘heating’) line. As BLEU walks through his hotel, followed by an entourage of close friends and team members, he’s seemingly indifferent to the day’s heat and any goings on in the vicinity; his presence creating a sense of stillness.

His latest album ‘Moon Boy’ finds a prime spot between the solemn melancholy expressed through piano loops, and lyricism often sealed with themes of trauma. His tone waxes and wanes throughout the album, from the heavy hitting lyrics of ‘Die Under the Moon’: ‘And we come from duckin’ hundred round drums/And the school system treat us like we dumb’, to the love-driven ‘Beautiful Lies’ with Kehlani.

His natural instinct for music also comes hand in hand with a finesse for business – the 28-year-old’s mindset has never been focused on merely displaying his accomplishments through flashy items. Instead, he is an advocate of becoming self-made and by proxy, in having self-belief, such as with his recent endeavour: Moon Boy University, which he describes as ‘a whole movement’ in itself.

BLEU’s music echoes the rich sonic history of Alabama – each time Alabama rappers such as Dirty Boyz or The Last Mr. Bigg would pull up onto the scene, they would leave a lasting impression of innovative songwriting, storytelling and unrivalled flair. During his pre-teen years BLEU would go on to grasp the art of mixing, mastering and recording his own music through a Karaoke machine. He tells VIPER he would then record lyrics on his cell phone while riding the bus to school.

In 2016 the Southern rapper dropped his ‘Investments’ mixtape which eventually secured him a deal with Boosie Badazz Syndicate and Columbia Records. However after years of label-related woes, BLEU rediscovered his artistic freedom and independence, pulling out of his record deal with Columbia in 2019.

Being independent allows for creative autonomy, and following his new distribution deal with Empire and his own label Vandross Music Group, he has flourished. Now with the critical acclaim for his latest projects, 2020s ‘Bleu Vandross 3’ and the deluxe edition of ‘Love Scars: The 5 Stages of Emotions’, plus a Drake collaboration on multi-platinum hit ‘You’re Mines Still’, BLEU is sitting on top of an abundant legacy.

VIPER sat down with the Alabama native and talked through his DIY beginnings, his idea of success, making some of his biggest hits in 10 minutes and much more…

You were born in Mobile, Alabama, where some really impressionable music has originated. How do you think that’s played into your own musical style, if at all?

I feel like Alabama influenced my whole sound; we’re still building on the shape of our music so it’s more so a culture that’s still being created right now that we kind of mould to our own.

At just 11 years old you taught yourself to mix and master and really got to know your craft intricately, perhaps doing things that not every teen would know how to do or have access to. How did you first push yourself to learn how these processes work?

I started off recording myself on a karaoke machine. I had a tape player as part of a karaoke machine that I used to have connected to the TV. This was a three-step process kind of thing, I had a beat CD that I used to burn off the Internet and then I played the beat CD on the radio and recorded [it] onto the karaoke machine. Then I played the beat from the karaoke machine to record from the tape, it was that DIY stuff. So that’s when I first really got into the technical side, I was into the technology stuff from young and that’s because I used to have to do so much to record myself, trying to get a song done and something that I could play back too.

True DIY style and then your dad also used to make music. What was your household like musically growing up?

When I did stay with my dad, he used to play music, sing a lot of his old songs, stuff like that. He used to have us dancing in the living room, having a talent show or something. So there was always music around since I was a kid.

From what we’ve spoken about, so far everything seems to have fallen into place naturally when it comes to music, which is really commendable in this industry. Do you ever feel a pressure to release music if you haven’t in a while?

I really don’t feel pressure, I feel like quality takes time. I usually have so many records that are off the album that go on and do well on their own. So I really [believe in] having time, I don’t make throwaway albums. I will usually have around three or four songs on the album that will blow up.

Your recent feature on ‘Possessive’ was incredible. What’s your creative process like? Is it a quick natural freestyle in the booth, or is it hours on end in the studio til you see daylight again?

That track’s from Chris Brown’s album, but originally I did that one for my album. Then I went over to Chris’ house one day and I just let him hear it, he liked it and just hopped on it. He wanted it on his album, so that’s how that came about. It’s a song that I’m definitely proud of right now even though it’s not my single as such. But as far as my process in the studio, usually it’s just getting on the mic. Once I hear a beat the melodies just come to me, it’s not like a whole process of sitting down, writing for hours on one track… I usually pull up the beat and just go in. The different thing about that is with me, I can do that and my rap is still deep. A lot of people were saying they can’t really record that fast and [have] it still be meaningful musically. I probably made some of my biggest hits in 10 mins.

In an interview last year, you said “I’ve had money since 2016,” talking about doing shows from early on, and this entrepreneurial mindset that you’ve shared with Boosie. So I’m interested to know, what does success actually mean to you, if it’s not about the money?

You’ve also once said ‘I always believe in myself, knowing the kind of music that I make. It’s always just getting the right ear to hear it’. What do you think is so key about having self-belief?

It’s important to have self-belief because you have to be motivated every day just in order to motivate the people around you. For me, I’m one of those artists that will wake up every day with this on their mind; it’s never not on my mind. It sticks too – people around you are only gonna believe in something if you believe in yourself. So if you don’t go hard, then why would I even bother. Why would I go hard [for you] if you don’t even go hard for yourself? It’s what everybody around me will understand about me.

Being so high profile, is it important for you to keep your circle close?

You seem to always uplift the people around you too and I’ve heard about Moon Boy University – for the generations that follow, is this sort of your way of paying forward the leg up that people once offered you?

It’s basically a production company where I’ve got some of my producers that helped me work on my album and helped me put together tracks for my album too. You know, it’s basically that – just a whole movement. A movement built off of the success from my first album, but I felt like people just loved the branding on it and it really caught on so it’s kind of like my brand. I just been branded.

Having talked about your last album. What can we look forward to down the line?

The next album is crazy. It’s gonna have just crazy music in general. A lot of time, my label is still trying to catch up. I’m always doing the next thing; the next project, the next big thing, always ahead.

You’ve also become a bit of a jet setter, last year you were in Lagos for the filming of ‘Unforgiving’ with Davido. Were there any funny stories from that trip?

There were a lot of experiences and funny stories for sure. A lot of funny things you just laugh at to yourself [laughs], we ain’t gonna talk about it though.

Best to keep it that way then…

When someone rebrands themselves from Yung Bleu to just BLEU I can’t help but ask, does this indicate a new era of maturity for you? Or was it just a simple rebrand?

It was more just a simple rebrand… it really wasn’t even a rebrand, it was just making the industry call me the same name that my people call me. My people call me Bleu anyway, nobody calls me Yung Bleu so it just made sense. People still call me Yung Bleu, it’s just a personal change for me.

When you’re young, there’s a certain confidence or youthful arrogance to try your hand at anything and take risks, which you can start to lose as you get older. Do you think that if you started making music later on you would have had the same level of confidence going into it?

So what’s next for BLEU? If you could project yourself into 10 years time, how is that looking or sounding?

10 years time? Just crazy plaques, crazy hits, more Grammy nominations, more Grammy wins. Being the go-to artist, more production credits. Becoming a household name in the music industry as far as creativity and being the artist that can really make the hits, because that’s what I’m about, I’m about the hits.

You mentioned creativity there. Is that something that’s important to you to expand beyond music?

What does having a legacy mean to you?

It means everything. My legacy is everything. Legacy is something that can’t be erased. Your legacy is your legacy, so that’s why I feel like it’s just so important because a legacy is something that brings in money too. If I create a legacy within myself, even if my kids don’t have money – which they will – but even if they don’t, just off the legacy people are going to want to do stuff with them, make something out of it. If you are a famous artist’s son, somebody’s probably gonna pay for the interview and somebody will probably want you to write a book about untold stories of BLEU. There’s so many things you could do with a legacy. I feel like it’s important to build a legacy at the same time as your career.

For sure. The branding of your name.

Shot at The Londoner Hotel.