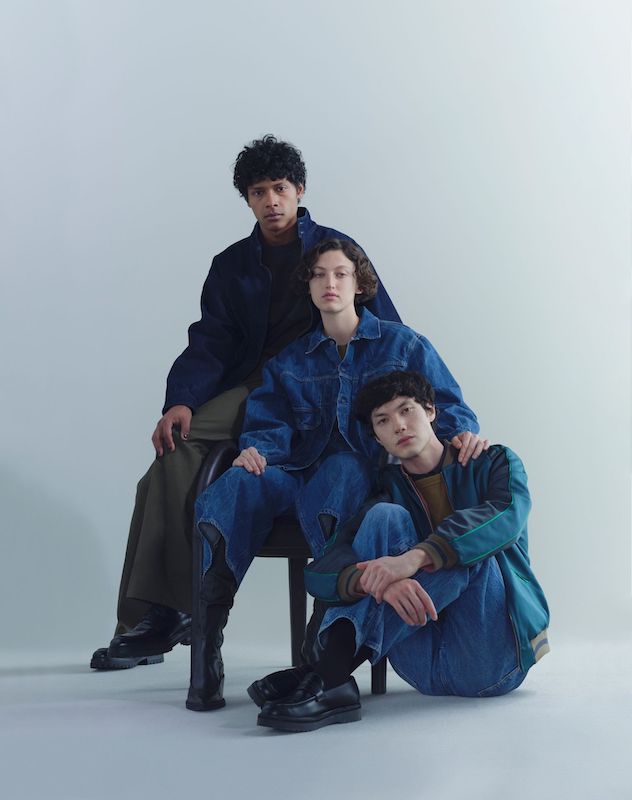 Levi’s® Made & Crafted is all about simple, classic design that plays with shape, proportion, and silhouette. For Fall/Winter 2022, that classic-meets-playful mix comes out in a goth and dark wave inspired collection of tops, bottoms, denim, knitwear, and outerwear. Think of it as the moody synth deep cut of Levi’s® Made & Crafted highly constructed style.

Featuring a darker colour palette with a mix of shadow tones and abstract graphics, Levi’s® Made & Crafted Fall ’22 plays with traditional elements—things like Ombre and buffalo plaids—in ways that make them feel fresh and interesting. Simple yet bold graphics inspired by early 20th century avant-garde artists play against shadow tones of the same colour. Classic styles are drawn out into exaggerated proportions to create modern shapes and silhouettes.

Elements of the collection include a buffalo plaid Ombre shirt, where the buffalo pattern increases in size as it moves down the shirt, and an oversized mock neck sweater with dark knitted rectangles inside rectangles. There’s also a slightly oversized take on a classic Donegal sweater featuring bordered white and black knitted rectangle graphics. Contemporary versions of Levi’s® archives pieces also feature in the collection, including a chocolate brown suede bomber with a black Sherpa collar that’s based on an old Levi’s® jacket from the 1950s.

Denim gets a thoroughly modern update thanks to a new wide leg jean and Trucker that feature a special forest green denim fabric. It’s made using a black instead of a natural colour weft, which means that, as the pieces are worn, instead of fading like traditional jeans the black will show through more and more. Also, in Levi’s® Made & Crafted denim is a new women’s Wide Barrel jean, a cropped, wide-leg version of the classic Barrel jean. And finally, there’s a new denim indigo Flare Jacket, which features elements of the Type II Trucker, but with a cinched waist and a huge flare in the back to give it a truly unique silhouette.

Geometric elements feature throughout the collection, most notably in the new Grid Blouse, a women’s shirt made with a unique windowpane fabric that looks like a grid of solid and sheer fabric strips. There’s also a new Rugby Dress that takes the classic style of a striped rugby shirt and transforms it into a shirt dress with an Ombre of rugby stripes that get bigger towards the bottom.

Outerwear mixes darker colours with plays on proportion as well, like the reversible Bomber Jacket, with panels of pink and red shades on one side, and green on the other. There’s also a heavyweight twill Shirt Jacket with kangaroo pocket in an earthy tone of sienna, as well as a collegiate style collared jacket in burgundy denim also featuring black in the weft.

“With Levi’s Made & Crafted, we take the Levi’s® DNA but translate it in ways that aren’t as literal as other Levi’s® collections. It’s designed for everyone and can be mixed and matched for a really playful approach on shape and silhouette. The focus is still on classic design, but we mess with those traditional elements to make everything feel more fresh and interesting.”—Paul O’Neill, Head Designer for Levi’s® Made & Crafted and Levi’s® Vintage Clothing at Levi’s® Strauss & Co.