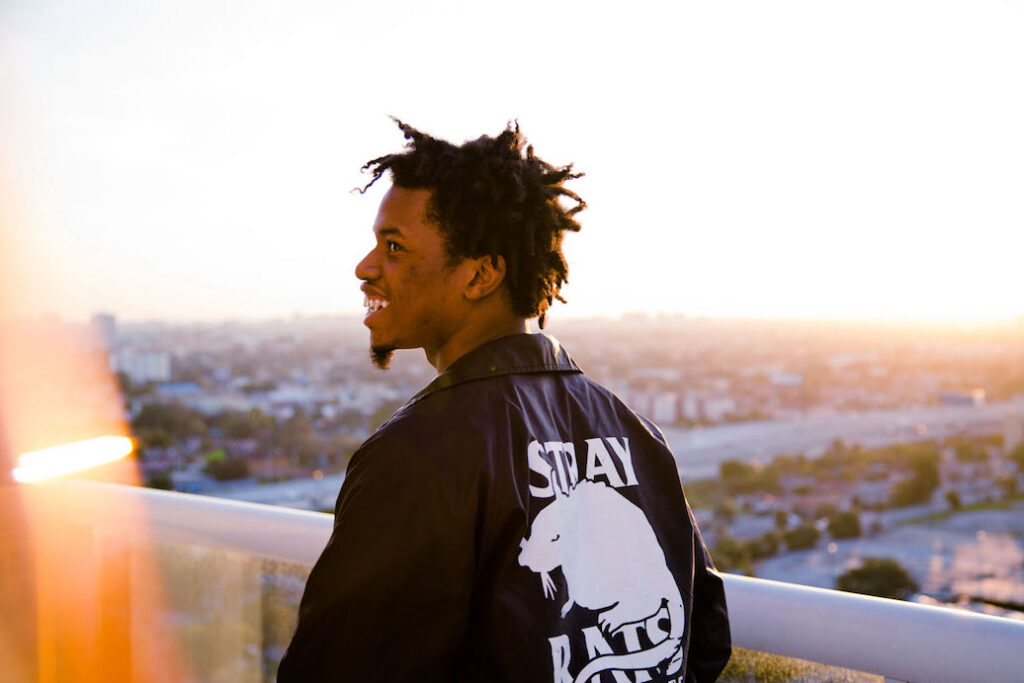 ARTIST TO WATCH IN 2014? DENZEL CURRY WITHOUT A DOUBT.

Formerly a member of SpaceGhostPurrp’s Raider Klan, the 18-year-old Miami native experienced a breakthrough year in 2013 when he followed an appearance on MTV’s RapFix and AXS Live to performing at Coachella. From booking shows out of state and releasing his debut album, all while completing his last year of high school, Curry began to take the first steps on his yellow brick road to success.

Stemming from his upbringing in the dangerous settings of Carol City, Denzel is known for delivering dark and ferocious, yet enticing rhymes that offer an open invitation into his mind. Often backed by eerie, bass-heavy production, he’s able to easily give listeners something real and raw; you know, some shit you can feel. Although his stories touch on subjects like murder and death, he’s simply a spectator of the violence that has plagued his hometown since a young age. So don’t label him a gangster, because that would be your biggest misconception about Denzel.

Looking to balance things out, Denzel slides in references to his interests from Dragon Ball Z to Nintendo. Growing up, video games and movies were an escape for him and his older brother, who would watch and play to avoid the crime just outside their doorstep. Their choices of entertainment, from badly dubbed samurai movies to Donkey Kong, played a major role in igniting the imagination and creativity we hear in Curry’s music, making it apparent that his talents would stretch further than just rapping. That’s right, Denzel is also a visual artist. When he’s not writing verses, he can usually be found illustrating characters that look like they came straight out of Adventure Time or The Intergalactic.

After learning to rap at the age of 12, it was four years until he released his first song on YouTube and became a part of the so-called “Cloud Rap” scene alongside rappers like Lil Ugly Mane, SpaceGhost and Metro Zu. While at the time you probably wouldn’t find these guys on the average music blog, they were using YouTube to their advantage and building a cult following on their own.

At age 17, Curry linked up with Mark Maturah, a Miami native who’s played a role in setting off the “New Miami” movement. Maturah was all for taking Denzel’s lo-fi underground popularity to the next level by becoming his manager. At the time, Denzel had around three thousand followers on Twitter, no SoundCloud, no major rap blog presence; nada.

In early 2013, after a few weeks of recording and strategizing, in came ‘Threatz’, the hard-hitting lead single from Denzel’s then soon-to-be debut album, ‘Nostalgic 64’, featuring Yung Simmie & Robb Bank$. The audio surfaced first and quickly became infectious, making its way onto a few sites, gaining more and more plays as the days passed. The visual, shot in the Florida Everglades at an abandoned military base, surfaced two months later in March and has since acquired over a million views.
Building on the positive response of ‘Threatz’, Curry went on to release a few more singles leading up to his album release. His lyricism and sound quality began to catch the attention of influential publications such as Pitchfork, HypeTrak, Noisey and 2DopeBoyz, bringing him to the attention of a whole new demographic. With no label backing or PR, just word of mouth and conditioned content, everything was happening organically.

It was evident that people had their eyes and ears on this new fresh talent and on September 3rd, Denzel released ‘Nostalgic 64’ to critical acclaim. Curry did the unexpected and took an approach not many new artists have the guts to do. Rather than following norm and releasing the album for free via web-hosting, his small team decided to shake things up and go straight to iTunes. When asked about this decision, Maturah says, “It was a matter of demanding respect out the gate.”

The choice was a risk they were willing to take, as fans showed their support and Denzel landed the #21 spot on the iTunes hip hop chart within a day, a rare achievement for an independent artist of his stature. What may have seemed as an absurd move for an artist fresh out the music industry’s womb was nothing more than proof you don’t have to follow the routine formula to reach success.

As the album continues to spread through the ears of the world, Denzel has received rave reviews of his dark, Southern-style and flow of words. Landing an interview here, booking a show there and major labels blowing up the line, DC’s career is reaching new heights. While at face value, you can file him somewhere in between the likes of Three 6 Mafia and Outkast, there is certainly room for the budding emcee to grow into a realm of his own.

With a new project entitled ‘Planet Shrooms’ on the table and plans to embark on his first US tour this spring, the future looks bright for the young Denzel Curry.
———————————————————-
Introduce yourself.
I’m Denzel Curry A.K.A Aquarius’killa, Raven Miyagi, Denny Cascade.

Since the release of ‘N64’ this past September, it’s safe to say your name has been buzzing, from booking shows out of state to landing on a few year end lists. Tell me how you’re feeling now versus pre-‘N64’ days.
I feel more accomplished than ever after creating ‘N64’ and garnering a lot of buzz. I feel way better since my mixtape days.

Describe the moment you decided to take on music full time.
The moment I took music really serious is when I got kicked out of Design and Architecture senior high school, that’s when I decided to do it full time.

How would you say that your music is different from other artists and what’s out there now?
My music represents my own world and reality blended together to create a series of epic proportions. Because I’m not the next man, I rap about what I relate to and the next artist raps about what he relates to. That’s how me and the next artist are different.

So you graduated high school a little over 6 months ago and you’re booking shows out of state. But I’m curious, was college ever in the picture for you?
Honestly college was in mind for me. I was thinking about going to Miami-Dade and then later going to places like UM or FIU but it seems the universe took a turn on its own.

Is there any advice you would give to aspiring emcees that are still in school?
I would tell them keep doing music and work on their craft but also I would tell them to get their education because it will carry them a long way.

Not only do you rap, but you’re also a visual artist. You drew all the artwork/packaging for ‘N64’ as well as some single covers. Do you plan to draw the artwork for all of your projects?
My father taught me how to draw when I was only three years old and it just stuck with me. Seeing other art in books really inspired me to keep going and I wouldn’t describe my style as anyone else’s. It’s how I feel. Yes, you will see more artwork from me for my future tapes and albums.

When it comes to nicknames, you’ve got quite a few. Can you tell us how each of them are different from one another?
Aquarius’killa – I was born February 16th and when it comes to music I felt like all my lyrics should be as cutthroat as possible hence forth the name Aquarius’Killa.

Raven Miyagi – Yung Simmie and I created a group called Black Raven, told Purrp (Spaceghostpurrp) and he gave me the name Raven Miyagi and I created his persona when I released ‘KOTMSV1’ (King Of The Mischievous South Volume. 1) as a samurai from another dimension.

Denny Cascade – Is an intergalactic space pimp from Planet Shrooms trapped in Blackland CC Zone 3 in Denzel Curry’s body when his starship which is now Sun life Stadium crash landed.

You once stated in an interview that you’ve got different flows for each. How do you decipher which character you’ll tap into on a certain song?
It’s all in the lyrics, You can tell who is who. Aquarius’Killa talks about killing all the time in the most descriptive way, Raven Miyagi is like the most lyrical style and Denny Cascade is a surprise.

Let’s chat about your upcoming project, ‘Planet Shrooms’, why did you choose to call it that? You believe there is no such thing as earth and other planets, that Planet Shrooms is where you live, are you into Astronomy at all?
I’ve been talking about planet shrooms since my mixtape days and it just stuck with me. I use to be into astronomy as a child because I wanted to be an astronaut but it was just a phase in my life. I was always into space growing up watching Star Wars and shit.

Do tell, how does one get to Planet Shrooms?
If I tell you I would have to kill you.