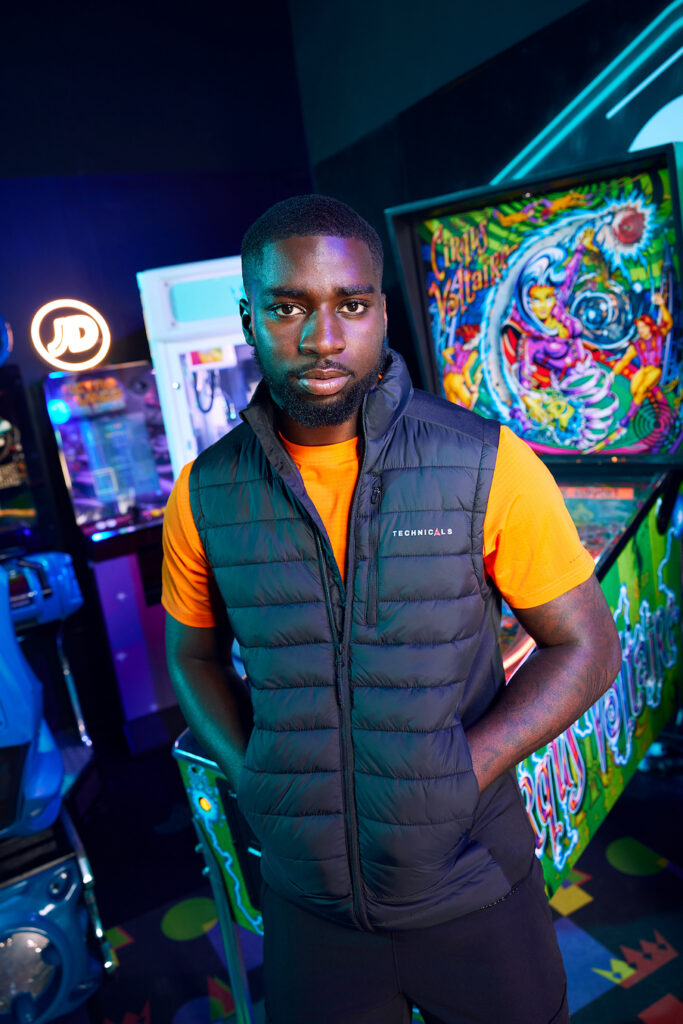 VIPER’s founder Lily Mercer spoke to YouTuber and presenter, PK Humble on the set of the JD King of the Game Christmas campaign. We’ve got interviews with the stars of the advert dropping on site every day until Christmas, stay tuned for a chat with R.A.E…

How did you get the name PK Humble?

What situation in life humbled you the most?

Probably when I got released from Colchester…I used to think I was the best footballer ever and then I was like, maybe I’m not, and now I’m here.

Was it always your dream to play football?

It wasn’t always I think, when I got to about 17 or 18 I actually started pursuing it; trying to be a footballer. And then I think at like 20/21 I got signed as a professional. I got released after my contract, it was 18 months. Then it was like, this is real life now.

How did you make the transition into your current career?

I’ve always had friends within the industry, because I used to manage Abra Cadabra. This has always been the person I am, I had a bit of a Snapchat following. I just started to do more on Snapchat and gain a bigger audience, then I started putting more out there on Instagram. I started getting quite good traction and engagement and I was like, “Well, I can actually do something with it.” Then from there I just started doing more, was given more opportunities. People had faith in me and here I am today.

So you mentioned managing Abra Cadabra, how did that happen?

We grew up together, went to nursery together. We lived practically on the same road, and when I moved house – the guy loves following me – he moved a four minute walk from me. We’ve always just rolled together really.

Is there anything that you can tell us about Abra that might surprise people?

He’s got bad breath – I think no one really knows that because his voice is so deep. Everyone just stays away from him [laughs]. I’m joking.

I personally think he’s got the best skin in the industry.

His mum makes these creams from shea butter and she’ll get like shea and stuff from Ghana. She puts in little tubs. He’s always had good skin and good cream. He’s blessed, it’s the touch of his mum with the creams, and he drinks a lot of water.

Who is your favourite person you’ve interviewed on the JD set?

We heard a thud and thought you were fighting AJ!

I think that was me stamping and laughing; you thought that was me getting beat up? [Laughs] I went into the room and said to AJ, ‘we’re gonna go over to wardrobe and get changed’, and he was like, ‘yeah let’s go’. I was like, ‘I’m joking, I don’t even know what’s going on’. He gave me one look and I was like ‘oh no, I shouldn’t have done that’. But nah, he was proper good.

Was there one question that you were a bit nervous to ask?

I asked Knucks who’s got the worst BO in the industry. He gave me one look like I ain’t gonna do that, let’s not do that. He weren’t happy about that one.

What was your first thought being asked to work within this Christmas campaign?

I was well excited, this is my first thing on TV and I’m in a Christmas advert. I’m not going to tell my mum, I’m just waiting for my mum to see it; it’s kind of surreal I’m gonna be on TV. I know I was in the JD store and my mum saw that, but now she’s gonna see me on TV, so it’s crazy.

I tweeted this one time, I stole from JD. Wearing the JD duffle bags as PE bags, that was always the thing. Obviously, we’ve got the local JD in Tottenham Hale, that’s my local JD. Even when I said to my mum, like, “Oh, I’m working with JD,” she couldn’t believe it. I ain’t taking her because when I used to explain to her what I was doing… like when I came home with the Ronaldo haircut with just the front bit, she didn’t understand. She was looking at me like ‘yeah, I think my son’s ill. I think there’s something going on with him’, I heard her speaking to my dad like “I think there’s something going on with him, we got to sit him down.” She didn’t know what’s going on, but now she’s seeing the fruits of my labour. She’s respecting it, she’s putting some respect on my name now. She’s well proud.

I’d pick a million white Air Forces, you can’t go wrong with white Air Forces, they go with anything, but then again, sometimes the Puma tracksuits go off. I’ve been liking the Technicals stuff, it ain’t really touched my side of town yet properly, but I feel like it’s gonna touch and go crazy; it’s proper sick.

Do you celebrate Christmas?

What is your favourite Christmas memory?

One year when I went to my brother’s girlfriend’s house and her whole family were away. Me and Abs were there for like two days, we kept coming back and forth. We had fun, it’s a cold memory.

I play football myself so I’ve always been mad competitive. I hate losing, I’m such a sore loser, I’ll start effing and blinding when I lose, I’m bad. I can’t take losing.

I think losing to my brother. Me and my brother used to always play Wembley. Losing Wembley to my brother, that used to ruin my day. My brother is one of them guys that rubs it in your face. He used to always rub it in and because he’s five years older than me, he was always faster, stronger and I couldn’t do anything about it. I hate losing at FIFA as well.

Any games that you can’t play anymore cause the loss was way too painful?

I still play Ludo, me and Abs play online Ludo. We all play till 6am, Ludo is my game, even if I lose I can’t stop playing.

You’ve got to go with Pac Man, I think it’s symbolic, it will look good. I don’t think I’ll play it much but it’s just one of them things that’s nice to have. Actually no, Street Fighter! I’m going crazy. Street Fighter or those boxing ones, you know the punch the punch ones.

Do you have any secret skills or talents?

I like to think I can sing, I probably can’t, but I like to figure I cansing.

What do you consider your greatest achievement?

Any bucket list-like career goals or something that you want to do in your future?

I don’t say my goals you know, I don’t put lots of foot in the air, but I do have them written on my wall in my house, like [my goals] for the year. I had some that I had to achieve by the end of the year. I’ve already achieved them some of them, haven’t achieved some of them, and some I won’t achieve this year because they’ve gotten [changed] for different reasons but yeah, I don’t really care. I believe in evil-eye and stuff, so I feel like people might see it and be like, ‘I don’t want the best for this guy’, and negative energy goes out there, and then there’s bad business.

Is there anything that you feel you’ve manifested?

I felt like just growing my audience, I always said to myself, ‘I’m gonna do everything it takes to get a bigger fan base’, and it’s getting bigger. Through manifestation, I actually believe that it’ll probably keep on growing. I don’t feel like there’s nothing that’s gonna stop me because work-wise I’m willing to do as much as it takes to be the best. I want to be the best in my field.

If you’re a trainer what style would you be?

Air Force’s…actually numbered Jordan Ones, because there’s so many, you can do Jordan Ones with anything.

What colour do you think your aura is and would that be a colourway?

Have you had any personal fashion disasters?

Filthy Fellas live show, I’m just doing me and I’m going crazy. Then I’ve jumped in the air and my jeans have ripped. I don’t even know how many people were there, probably 1000 or 2000. It’s ripped a bit and I’ve heard it, but I’m saying “No, this cannot happen to me!” Then I’ve felt a breeze and I’m saying, “this has happened to me. Is that two seconds?” It felt like 45 seconds. Then I was like, ‘You know what? Forget this’. I’ve just ripped off my whole trousers and I’m in my boxers on stage. I’m like, you know what, I gotta embrace it. Because if I act embarrassed now, they’re gonna cook me. And Filthy Fellas, everyone’s just getting onto each other, no one gives others flowers. It’s amazing, everyone roasts each other. So if I showed I was embarrassed, I’d have been the laughing stock of the night, but I turned around for myself.

Have you always loved streetwear and if so what is your favourite?

What would you wear to impress on the first date?

I wouldn’t wear a tracksuit to impress, maybe some cargos, some jeans. Nice trainers, a t-shirt; I like a t-shirt to show my tattoos. Shades, I always have my LV shades, and I obviously have to have a trim, I don’t feel myself without a trim. No hats, I don’t wear hats, I don’t do earrings, I’m pretty simple, classic. Jeans can’t be too tight, not too loose as well. They can’t be straight legs. When you’re in slim fit jeans you can’t manoeuvre and I’m so lively, I’ve got to have some room.

What is the most important lesson that life has taught you?

Don’t stop working. It’s cliche but never give up, when I got released from football, thinking “Damn, what am I going to do? I’m in the mud right now.” I stopped managing Abs, so where am I going to find my source of income from? I believed in myself and everything just fell into place. But if I stopped working and stopped being consistent with what I was doing, I don’t think I’d be in this position now.

When I’m making money. I love money. It’s the truth. Like when I make money I’m happy because I know, I can go spend money on my little sister, I can spend money on my niece. I can do things for my family, and see my family happy, and the people that I love the most happy. Being able to do things for them that I couldn’t have done for them before, because I haven’t grown up rich, just having that financial stability and being able to bring people financial stability. That makes me happy, because I know sometimes that can be annoying, doing a little bit makes me happy.

Watch PK Humble in the JD Christmas campaign ‘King of the Game’, with JD exclusive product drops available online at jdsports.co.uk and in stores across the UK now.