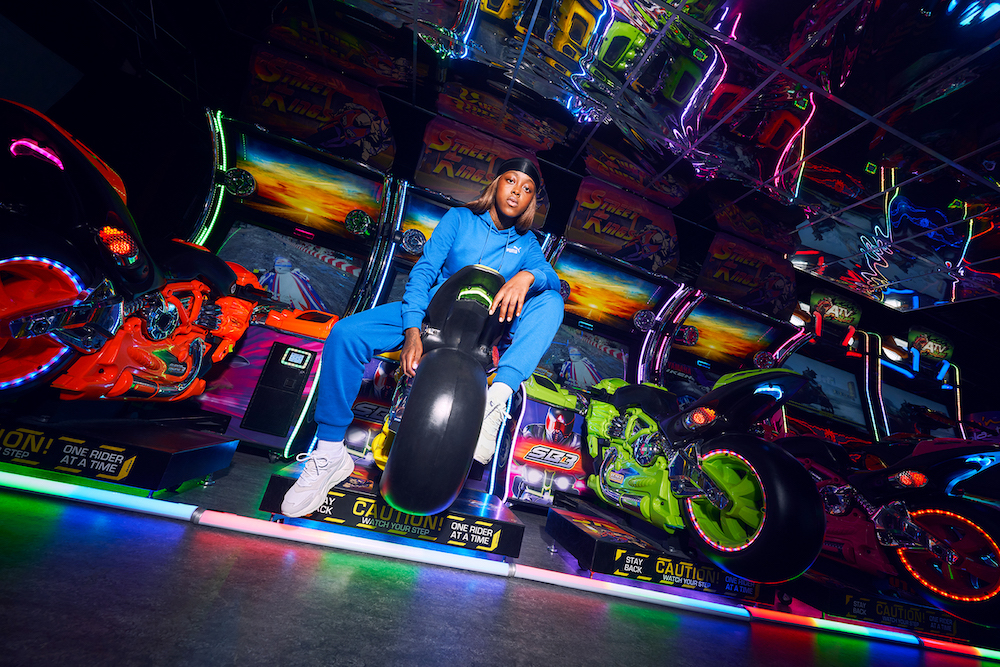 VIPER’s founder Lily Mercer spoke to East London musician, Amaria BB, on the set of the JD King of the Game Christmas campaign. We’ve got interviews with the stars of the advert dropping on site every day until Christmas, stay tuned for chats with R.A.E and PK Humble…

It was very authentic, it just happened. He shouted me and then we just did the song.

When did you start to feel like your Jamaican heritage was coming into your music?

Early this year, with ‘Slow Motion’, my first official release, I tapped more into my heritage and my Caribbean side.

How does your Jamaican heritage influence you when you get in the studio?

Not really, when I go there I just chill. It’s just vibes there but I definitely come back wanting to make music and wanting to say new things. I feel like Jamaica is a good place to be but not to make music, chill there for a month or two then come back to London. Then write about your experience there, it’s the best thing ever.

You’re from Hackney, are there any artists from the borough that you wanna work with?

Yeah Kojey [Radical] but I’ve worked with him, we have a sick song together. He was top of my list to work with from Hackney. I used to listen to him from the days when he was on FIFA. So he’s definitely the top one and I’m glad I worked with him; it’s only him.

How would you describe your music in four words?

Sex Positive is quite important. Women are often over sexualised.

100%, I don’t care. Sex Positive but I say whatever you want to say; no one’s gonna tell me what to say. I don’t care and I feel like when you don’t care, a lot more people relate to it than when you hold back. Because they’re like, “I feel like I know what she was gonna say but she didn’t say it.” I will say I don’t care.

Has having that true core message helped you build a stronger fanbase?

Yeah. 100% I feel like people can relate to things that I say and not even what I say, just the feel of the song. When you feel a song is right, you can just feel it. So yeah, why should I give a heck?

It’s important to see women in the Rap industry who don’t feel obliged to have surgery.

Yeah, I feel like society plays a big part in it; social media and society. In my generation especially and the generations that are coming up, I feel like societal pressures is such a big problem. Social media just portrays that you have to have a certain look and you don’t. Don’t grow before your time, just chill out. Me, I’ll be in a tracksuit everyday, no one can tell me nothing. Chill out man, enjoy how you are. I think being from the UK, a lot of UK females feel like they have to be like they’re American, bro you’re from the UK, just relax.

Do you have a song you’re proudest of?

I don’t know, I feel like I haven’t started yet. ‘Slow Motion’ got streams and I’m doing well right now but I haven’t got to where I need to be. I don’t have a song like “rah, that one,” not yet, it’ll come though; sooner or later. I’m grateful for my year but I just know that hit hasn’t been made yet. When I go back to Jamaica maybe, when I get some sun; this country’s depressing so it’s not here yet. I don’t really think ahead so whenever I go to the studio, I’ll make bangers but maybe in the next two years I’ll have that one song that is like, “wow.” For now, ‘Slow Motion’ has been that one song but I don’t rely on ‘Slow Motion’ to be that one song; I’ve got two years. I’m going to make bangers facts, but in two years I’m gonna have that perfect “wow” song.

Do you have a career goal?

What does that feel like when you’re not even from America?

I was mad young, I was eight but those times I was singing Nicki Minaj and Etta James at the same time, it was so mad. But from young, the reception that I got from the crowd was like, you have to come back. Now I have my own music out and my music’s global so I know one day I’m gonna sell that out, facts. Being from the UK, that’s why I want to do it even more, I want to show I don’t have to be from here to sell out you lot’s venue.

Who inspires you the most?

It’s becoming myself because I’ve been dreaming about things and my dream is now my reality. So I feel like I’m my own inspiration because I’ve inspired myself to not quit and keep going no matter how much people have told me “allow the music ting.” I inspired myself to say “no, keep going.” I used to write in my diary, “never stopped making music.” Always have a backup plan of course but don’t stop your dream; now my dream is my reality.

Imagining your project is complete and your songs ready to throw some features on, which three artists from the UK would you pick?

I’d do Bellah, definitely Bellah. I’ll do Jvck James, that guy man! I’d do Jvck James and I would do there’s an artist called Ellory but no one knows her, but definitely Ellory. Them three, they’re my top three, I’d definitely do some collabs with them.

First thought when you were asked to shoot the campaign?

I was very very shocked but then I was gassed as well because I used to watch it on TV. I’m like “rah, me now? My turn?” I was gassed, so happy. I’m still very excited, I’m gonna go home and watch myself in an advert. I’m happy, I’m not gonna tell no one, they’re just gonna see it one day like, “when did she do that?”

If you were a trainer, which style would you be?

Puma RSX. Them trainers there, they’re the best ones to get, RSX trust me. Them ones, they’re comfortable and they have proper grip; definitely those.

What is your favourite memory of Christmas?

Family always, I don’t have a favourite. So whenever I’m with family, that’s my favourite time. My family is everything so when I’m with family and friends on Christmas. I feed the homeless on Christmas as well, that’s the best time. It’s nice to be family but then to feed the unfortunate, you feel good within yourself to know that you’re actually helping someone other than yourself and your family and friends.

You come from a place where community is important right?

No. Don’t care. I don’t care about that, just have a good time. When I go go-karting, these lot are racing and I’m like, “No.” I’m just trying to have a good time, I’m trying to turn wheels and skid; I’m not competitive at all.

Do you believe in friendly competition?

Yeah, I’ve got a small friendship group, there’s three of us. We try to benefit each other and if we see that someone’s slacking, we’ll tell them that they’re slacking. I think it’s important to have that kind of friendship but if you can’t take criticism, and you turn it into an argument, you’re not my bredrin. If you can take that constructive criticism and turn it around, you know that we’re actually friends. These lot tell me all the time if I send them a song, “nah man, you can do that better.” Then I’ll do something better and they’re like, “yeah that’s right.” When you know they’re proper genuine then it’s calm.

Any games that you can’t play anymore cause the loss was way too painful?

Do you have any secret skills/talents?

Acting, I got into it recently. I’ve got an Amazon Prime series coming out called Jungle. And I roller-skate, it’s so lit!

No, this is just a one-time thing. Learning scripts is not for me, I can’t sit down and learn a script, it’s hard. On set, they had to read the script to me because I didn’t know it.

What makes it different from bars?

Because I write them, when you write them it’s easy to memorise. Scripts are not like a song so it was bare, it was an everlasting song; I can’t. If they gave me two words, I’m up for it. But them scripts with paragraphs? I can’t do. It was a good opportunity, it was a good experience to do but not now.

In the future, you get offered a role and you only have say a couple lines a minute, what’s the dream role?

Something fun and quirky because I can’t do something serious. What’s coming out is so serious and if you ask any director, they have to tell me, “please stop smiling, please stop laughing, have a serious face.” I can’t because if you tell me stop, I’m gonna want to smile. It’s peak but [I’d like to play] someone that’s funny or quirky.

Have you always loved streetwear, if so what did you like the most as a kid?

As a kid, it would just be short sets because the sun was always out as a kid. Now it’s Puma, Puma tracksuit, Puma short sets, Puma shoes, Puma socks, Puma glasses, everything Puma. Their tracksuits are mad comfortable.

What is your go-to outfit on stage?

Tracksuit on a cold day. Puma sports bra and short sets on another day. That’s my go to.

PacMan. You see that game? That is when I can be competitive.

Roller skating is rude to me. One time I was trying to go in and out of the lines but I was going down a hill. I’m trying to turn to stop myself and I tumbled all the way onto the pavement. The man dem’s just laughing but yeah, I just stayed on the floor, just stay until you want to get up.

Is failure an option?

Was that spirit important when you were getting into the entertainment industry?

I don’t doubt. If God says so then it is and his timing is the best timing. I don’t rush anything I do. Once he says go then it’s go, that’s it.

Watch Amaria BB in the JD Christmas campaign ‘King of the Game’, with JD exclusive product drops available online at jdsports.co.uk and in stores across the UK now.