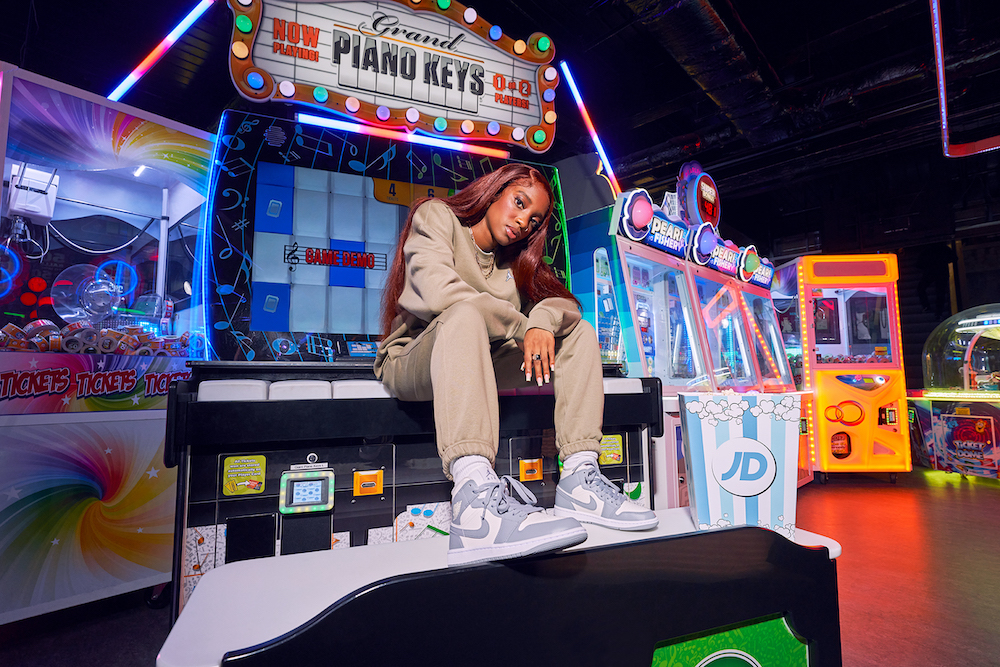 VIPER’s founder Lily Mercer spoke to South London singer and songwriter, Ojerime on the set of the JD King of the Game Christmas campaign. We’ve got interviews with the stars of the advert dropping on site every day until Christmas, stay tuned for chats with Ethan Matthews, Amaria BB and more…

You brought a dark energy to R&B which is refreshing, do you feel like that was needed in the genre?

I wouldn’t say it’s something that happened with intention but it happened through my execution, which is very DIY. A lot of the production I was using, I took a liking to and it just so happened that the subject matter on top of it and the way I would sing, produced that dark R&B sound. Now I can acknowledge – 10 years on – that it’s definitely dark and mysterious. At this point, I’m just doing me, I’m not really trying to create that pocket because I’ve got more upbeat songs and songs that are a bit brighter.

Did you feel like that was lacking before you started releasing?

I definitely didn’t think there was a strong R&B presence at the time I’d entered, whereas prior to me you had Misteeq, so many other R&B acts like Craig David. Even acts that didn’t reach those heights were still being pushed into the mainstream and they [would] still be on MTV Base. Around the time I’d started music, it was lacking in that diversity that we used to have, and there wasn’t really much of a scene. I could name people on my hand, who I consider to have been making waves in R&B and within that sound. I definitely think there was a gap in the market and I didn’t know how on earth I was going to tackle it. But I feel like with time I’ve managed to create a pathway for so many other people to now come through within that space. Hopefully to become global with it as well, I feel like the UK is a great place to start, we have such a good infrastructure. I think there’s a lot more patience as well with artists, and you can be a bit more rough around the edges. Then you can develop that in a way that it can also be marketed and pushed within different spaces around the world.

Did you notice that other countries were tapping in early on?

Yes, as soon as I put a track on SoundCloud I started to get an American following. I’d say my most interactive followers on Twitter have always been from stateside listeners. I’d say I’ve always had that, and it’s grown to the point where I’ll say that my US listeners are just as much as my UK listeners, which is really nice. I’m definitely worldwide, I belong to the world.

You’ve dropped a couple of singles this year, are you planning on featuring them on an EP or album?

Yeah, I’m always working a lot. I’ve never not worked since it came out, so hopefully yeah.

This would be your first project since ‘B4 I Breakdown’; has your approach changed at all in terms of how you write a song? Or construct a project?

Definitely, I feel like because it was a mixtape and the title was to set the tone; this is what I have, this is all I’ve left with, please take it before I break down. Now that the project has been released and – from the time it was released to now – to hear so many different types of feedback; different stories about how it’s touched people. Something that I really felt attached to in the moment and was scared to let go of has now been in the world for that long and changed so many people’s lives from the feedback I’ve got. It’s definitely inspired me for the next project. I want the vocals to be even stronger, I want the mixes to be stronger, I would like the beat selection to be even stronger, and to just tie in everything I’ve done in the past to create great music. It’s definitely affected future music and I’d hope that in the previous singles I’ve released, people can hear that growth. Then eventually if there is a project, then you can hear the changes and what I’ve been working on. I’ve been listening to feedback – good and negative – to shape this.

Do you care about the negative?

I don’t really feel like I get much negative feedback so when I do, I just take it in and then I let it go. Whatever emotion that brings, I’ll let it sit. Then I have to move on because mainly positive things are being thrown my way from the people that surround me, to the people that listen to me and buy my music and just invest in me as an artist. I feel like I’ve got so much love that I’m surrounded by, I can’t be concerned with that small percentage of negativity so much; I don’t let it consume me.

You’ve spoken about black women not being treated fairly within the music industry, what changes would you like to see?

Be aware. Being aware is just listening to those black women around you and the things they say, definitely commonalities in different black women. To throw an example out there, if you’re constantly hearing stuff like, ‘hair isn’t considered on a shoot’, or ‘makeup isn’t considered on a shoot’, make an effort to book a team that can facilitate towards a black woman. You don’t know how much pressure that relieves when you’re doing stuff within that area. If you think something coming from a black woman is good, share it or say it to her. It doesn’t have to be massive things, but those small things make for bigger changes. If there’s ever an opportunity where you could put a black woman first, do that. That can be in so many different ways. I just think being aware of your surroundings, and listening to black women is basically what’s going to push black women forward to being more comfortable in the industry. I’d say I’m in a very comfortable space. I’ve had a lot more respect and care and attention from people that work with me, which is why I’m still in good health as well. I feel good within the industry.

How did you feel when you got the call to be in the JD Christmas ad campaign?

Yeah, it was nice. I loved shooting and being a part of this year’s campaign. Me and Amelia Dimoldenberg are together in a scene. The photo shoot was my favourite part, in the JD arcade area, because I could see how the pictures were coming out and I was like, “yeah, this is a vision.” I enjoyed it, now excited for it to launch.

Are there any games that you can’t play anymore cause the loss was way too painful?

Mario Kart, that takes me over the edge. Don’t play with me, if you try and beat me in that game, I’m gonna keep going until you don’t want to go anymore. I beat someone before and they were so shocked; they made it a thing to beat me in every match after that. Yeah, I’m very competitive when it comes to Mario Kart.

If you were a trainer, which style would you be?

What colour do you think your aura is? Would that be the trainer’s colourway?

I don’t want to say red because I like it…but everyone’s saying I’m giving gold; let’s say gold. Gold is close to brown, I’m brown. It all connects, if I could make a shoe off my aura colour and it’s gold…I might have to make a different colourway [laughs]; there’s purple, yellow, red, whatever you want. It’s giving amber, because it’s close to gold. Amber is a striking colour; very warm tones and I can incorporate it with the colour white as well on a trainer.

What is your earliest memory of JD?

I was in year four and I wasn’t really into the bigger names in designer or sportswear, it was always smaller names or no name brands. My uncle was just annoyed at me – sick of it – so he took me [to] JD sports, I got my feet measured and he bought me a pair of Cortez. When I came back to school, they couldn’t talk to me the same because I’d levelled up. I took feedback and I levelled up, I came back and I had Nike Cortez and I was gassed. Then subsequently, every year after that, I got different Nike trainers so then it was the Dunk, then it was the Huaraches. That was my first memory. When I got my first job, I remember going into the JD Westfield with my little paycheck and buying any trainers that I could afford at that time; so it all comes around full circle.

What I’m wearing, I like this tracksuit; I’m hoping I can leave with this. It’s a gorgeous khaki tracksuit. Easy on the skin; I’m very much about breathable tracksuits. This is nice, but it definitely can kick in in the winter as well.

What food has to be there, or it’s not Christmas?

Jamaican food, it’s not Christmas without Jamaican food. We can have some British exports involved but really in reality the heart is the Jamaican food. So oxtail or curry goat, chicken. I make sure I always have a Jamaican dish included and Nigerian dishes; well, jollof rice.

What is your favourite Christmas memory?

For years I was shoving my feet in toy cars. I was young trying to make skates and actually got surprised when my parents got me skates. But they were like, “you were shoving your feet in cars. We had to do something!” So I got skates, I was so excited and I never used them. Never used them after that but I was excited to receive them.

When I’m with my best friend because I can be myself. I can tell her anything and she’s also my family as well.

Watch Ojerime in the JD Christmas campaign ‘King of the Game’, with JD exclusive product drops available online at jdsports.co.uk and in stores across the UK now.