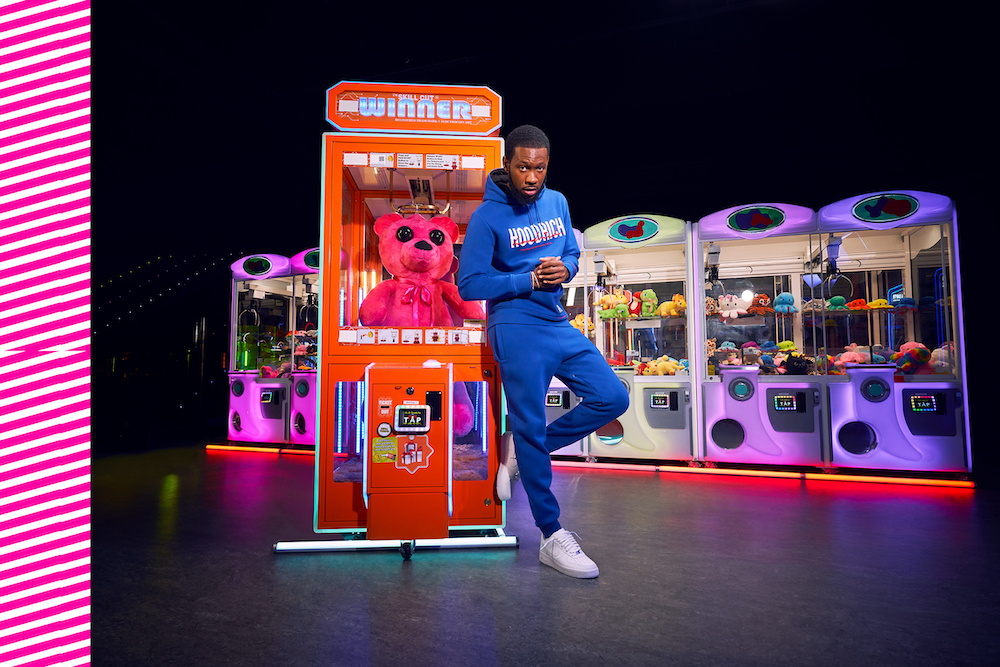 VIPER’s founder Lily Mercer spoke to music producer and curator, Fumez, on the set of the JD King of the Game Christmas campaign. We’ve got interviews with the stars of the advert dropping on site every day until Christmas, stay tuned for chats with Tobi Brown, Knucks and more…

When did you know that this was the career for you?

When I was younger, I used to watch 8 Mile and Get Rich or Die Trying and I felt I always wanted to do music but I never wanted to do what they were doing, if that makes sense. I felt like there’s parts to music that those movies showed me. There’s parts to music, where people are under appreciated and then the light’s not really shining on those people. I wanted to create and make a difference. So I tried to find a loophole where I could do that, that’s when I decided I’m gonna make it work and God willing, we’re here.

When did you first have that realisation that you had reached that goal?

So you’re always focused on the next target?

Yeah I’m always wanting to do better, I’m very critical of myself. So it makes it hard to celebrate sometimes, which is a gift and a curse because you always want to do more. We’ve done quite a lot in the last few years and I didn’t even sit back and raise a glass. I’ll just say, “how do we do it bigger and better?”

You’ve had an incredible run on your platform but is there a UK artist that you really want to feature in one of your sessions?

I’m a big fan of D-Block Europe. I’ve never worked with them but I’m a big fan. There’s a few, one of the first artists I worked with was Giggs but that was when I was a kid. I don’t think he remembers, so it’d be good to do it properly, where we’d both remember it. I just keep pushing, I’m not forcing anything. I’m a big believer of when the time’s right so God willing.

You featured an Iranian Plugged In recently, do you have more plans to take the platform international?

I don’t feel like a lot of the UK platforms supported international releases, because I don’t feel like they’ve got the numbers before but for some reason, I’m hitting the up and coming. I’m not hitting the superstars. I’m hitting the ones that God willing will be the next superstars. I’ve done five or six French I’ve done a few German, I’ve done Argentina. I’ve done Spain. I know a lot within the Persian drill. It’s been a goal for me to branch out and get international acts on the show. Because when I go to Greece, I’m a popular loner, I like to go away and catch flights on my own. I still view myself as a normal person. It’s my team that’s telling me “bro, you can’t go here on your own, that’s crazy.” I’m like, “why not? I’m just a normal person.” I just go there and eat food and whatever, so I’ve gone abroad, and I’m getting stopped by fans. I’m like, “How do you know me in this country?” I like the International pool, it just makes me feel that I get more accomplishment from that, because it’s so far out of home.

Plus drill is global now.

Yeah, there’s a drill scene everywhere and if you want to be the biggest in drill, then you’ve got to make sure that everywhere is tapping in too. It’s easy to get your friends to listen and even your country, your hometown, you got to branch off. I don’t feel like success lies here in London or England alone. I feel like this is where it starts, this is where you build your brand, this is where you plant the seed. But you go abroad and you gotta let the sun shine on it and not just the London sun. It rains over here, we got a nice little summer and then the other day it was raining. My studio was flooded this June.

Which artist from the New York Drill scene would you most like on the channel?

Obviously that would have been Pop [Smoke], rest in peace, man. But in that scene, if I’m completely honest, the US is very delicate when it comes to these things. So it’s not like the UK, in the UK I position myself in a way that I’ve worked with everyone. So I avoid the mixup. Whereas in the US, they’re very much like once you work with us, you’re one of us. Do you understand? So I’ve just been working out how, who, what, where. But if I was doing US I’d rather do Plugged In with someone beyond someone like Drake. I wouldn’t dive straight into the US. I feel like I need to plan that one strategically, I’m very much a chess player.

Have you tried MCing too? Or have you stayed behind the boards?

Yeah I had a whole mixtape, I started off rapping when I was about 13 until 15 and then I put down the mic and went behind the computer and I decided for me I didn’t ever want to be that guy or that rapper if that makes sense. There’s a lot of stuff that comes with it, I just wasn’t ready but now I’m pretty much on it now anyway, somehow I managed to bridge a gap, there wasn’t a plan but we’re here and we’re loving it. I did have songs before but I won’t tell you where to find them or I won’t play them for you or anything. I still have a lot of guys that come down to the studio and we go back and forth on ideas, flows, melodies but I’m not trying to push that. Even though the fans really want me to do a Plugged In.

You’ve executive produced your own projects too, are you working on any more?

Yeah, I’m working on something with Atlantic Records now. But yeah, it is difficult. It is hard to work on, it should have been done. But where a lot of people don’t understand the business side of music, that’s the side that slows down everything and that’s the side that people don’t see. They just make assumptions and accusations. So it’s difficult but we’re working on it. There will be another project on its way soon, I anticipate February.

Obviously your reactions are one of the best things about your freestyles, what is the wildest comment you’ve ever heard about your facial expressions?

I’ve read some comments and there were wild. Then other people are like, “the reactions made the song” but they’re just the normal comments. I try and take myself away from the comments now, because you get lost in them. I remember when I was looking at comments, and let’s say, there’s 1000 comments and four are not nice, that four that are not nice stick with you. The other 996 don’t, it’s the four that sit with you. It’s like ‘they really said that. Like, hold on what?’ So I’m trying to just focus on the positives.

Why did you add the engineer to your name?

Basically I had a mentor and his name was Ron and he added “the producer.” Then I felt like I wanted to add “engineer” to my name. I don’t think I ever told him but he inspired that. It describes the brand, what you’re trying to do, what you represent, what you stand for, boom. Put it in the title, put it in a name, brand it, let’s go.

What was your first thought when you got the call to be in the campaign?

When they first told me I was like, “Yeah dope, where’s it going? Everywhere? Oh, wow. Dope. Okay, I’m with it.” I was very much like, sick opportunity. When I see it on TV, that’s when the excitement will really kick in. That’s when I’ll be able to tell people and when it comes out on TV, I’ll be like, “Yo, guys, this was crazy.” JD big up yourself. Hoodrich big up yourself.

Astroturf’s, those times man would go and buy them and wear them with jeans. It was funny. Obviously we bought it for football but I saw people go there and buy them like they were trainers.

I’d want to be on the Time Square billboard as a Hoorich advert, I’ll frame it. I’m putting it on my wall so I’d want that framed underneath my Christmas tree. That’s what I’d wish for.

I’m extremely competitive. If I care about a game, you can’t beat me and if you do beat me, then I’m going to train and I’ll be back. For example this year’s FIFA, I haven’t really cared about the game too much. I didn’t play it for the majority of the year and then I played it the first time when I had a studio session, and I plugged in and this guy was like “Oh, you play FIFA.” I was like, “Yeah bro, on last year’s game I was the man.” And he’s like, “this is a new game this year.” And he washed me. It was calm until he started doing this bragging stuff and pulling out phones and putting me on Instagram. I was like, “You know what big man? I’ll be back.” And now I’m actually training, it’s mad. I’m so competitive. I’m sitting there like “yeah about three more weeks and I’m gonna phone him like “bro remember me? I need you to come back to the studio please, we need to rematch now. And we’re going to film it since you like the phone so much.”

What are your style essentials from Hoodrich?

I like how the tracksuits are fitted, they’re kind of tapered. I’m a tracksuit man, anything I can wear white sneakers and white socks with.  Nice blends, I don’t like too many colours, I’m a plain Jane. Fling some aftershave on, fresh trim, maybe a one watch and jewellery and you’re good to go. I’m blessed to be able to go to work in a tracksuit and not get frowned upon or discriminated against.

Can I be extra and say if I had a mansion I want to be gifted the whole go kart section?

Watch Fumez in the JD Christmas campaign ‘King of the Game’, with JD exclusive product drops available online at jdsports.co.uk and in stores across the UK now.