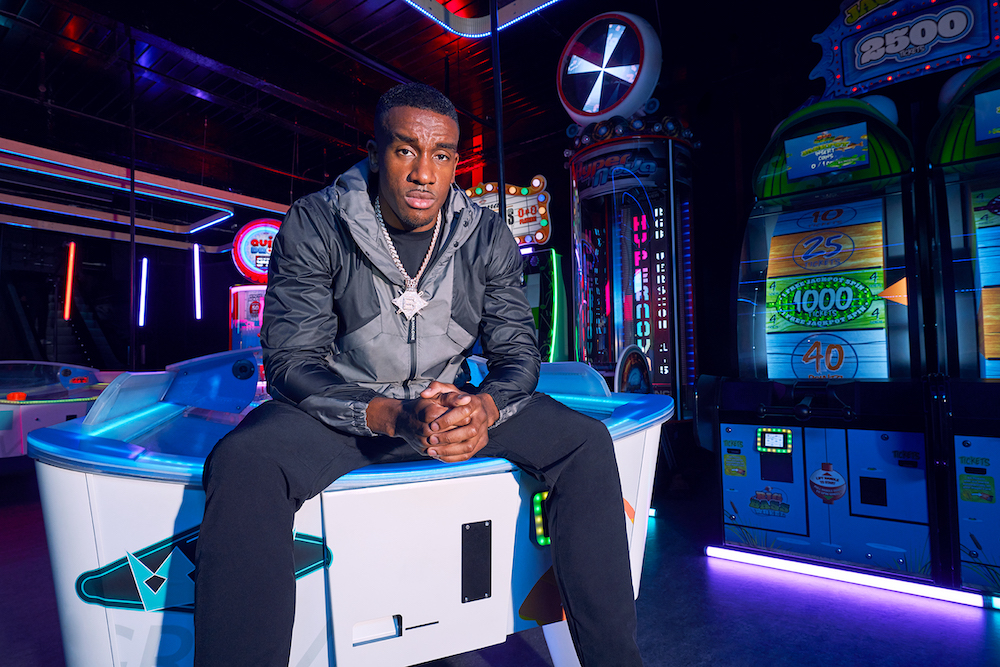 VIPER’s founder Lily Mercer spoke to Manchester rapper, Bugzy Malone, on the set of the JD King of the Game Christmas campaign. We’ve got interviews with the stars of the advert dropping on site every day until Christmas, stay tuned for chats with Knucks, Amaria BB and more…

You dropped new music with Mist recently, what’s the dynamic like when you two get in the studio together?

A lot of energy, which is ironic. He’s a character, we kind of came up at the same time so it’s a mutual appreciation of each other’s music. There’s just a natural excitement when we get in the studio.

The UK music scene has been very London-focused for the majority of your career but these days a lot of rappers from other cities are enjoying success. How did you break those boundaries down for yourself at the start?

I kind of blurred the lines between real life in the streets and music. Then when I got in, I made sure that I saved enough money to be able to demonstrate to the London guys that I was serious, that was the process.

Do you think Manchester benefited from being able to create its own scene without watching London?

Yeah, potentially the whole of the North but it’s all one thing. It’s not as if there’s a music scene in Manchester that’s popping more than the music scene in London. It’s just that the whole thing’s expanded now.

Manchester seems a bit more community-focused in the Rap scene than London, do you agree?

I’m very much a lone wolf so my contribution to anything anywhere is my own success and the people or the things that I big up. That’s the way that I did it so I can’t really comment on it.

What advice have you given to the younger names coming through the city that you wish someone had given you?

I believe everything happens at the right time and the way that it’s supposed to happen. When I’ve come into contact with up-and-coming artists, I’ve told them to save money.

Besides Mist, what’s your favourite song you’ve done with a UK MC?

I’ll say Mist for now because he was coming up at a similar time to me. I saw his early tracks and felt his pain, he’s been through a lot so I shine a light on his name at this point.

It’s a marathon, there are always different stages. In making one song you might be more focused than when you’re making another. But in terms of the full vision, it’s always been the same and I’m someone that’s studied legacies. So that’s what I’m interested in, there’s a marathon to get into that position. But I think within the pursuit of excellence, it’s to be world class because that’s what it seems that the legends are; they’re world class, they’re unique and not afraid to be themselves.

Having such an illustrious career, do you have something you consider your greatest achievement?

Maybe the way I bounced back from the bike accident, that could have devastated my personal life and my career. I just got straight back to it and not only that, when you’re in a position where you make a product that fans then come along and buy, you’re always hoping that you can give them something back of value. After the bike accident, I could have easily taken time off but I saw my commitment to the audience, went straight on tour and bought an album out straight away.

What was the biggest challenge you faced getting back to work after almost losing your life in the crash?

Selling out a tour during COVID, that was challenging just believing I could do it. I did the arena in Manchester, it’s never been done before in this genre of music and it was COVID. So a lot of people were pulling their tours and even my agent was panicking a little bit. I could hear his voice shaking but we marched forward.

First thought when you were asked to shoot the campaign?

I’m excited because I’m wearing B Malone this time. I’ve been involved in these campaigns previously, but I’ve been wearing different brands. This time, I’m wearing my own brand and it’s a very proud moment. I felt like I was ready to bring my energy to the table and make it the best it can be.

Stumbling in off the streets as a little nuisance, walking around looking at the trainers and wishing I could afford them. Then by some stroke of luck, you’re able to come back and buy a pair. JD Sports is big in and amongst the culture, amongst the kids from a background of struggle. We aspire to be able to go into JD Sports and get a full tracksuit and trainers, it’s just a thing that means something and it was like that for many years. So those are some of my earliest memories, along with maybe the JD bag, it’s another iconic part of history for many of us.

What are you wearing in the campaign?

I’m wearing the black and grey Compass jacket; this is new, it’s exclusive. It’s not out yet and then we got the cargos and the Triple Black Scorpions, which were designed after the anatomy of a Scorpion. This is my favourite jacket and these are my favourite tracksuit bottoms. I try to design clothes after my favourite garments, things I’ve worn and I’ve thought, ‘Oh, these are perfect’. Or maybe they’re not perfect and then I’ll design a version that is perfect, so these are my favourite so far.

If you could pick one thing from JD Sports that you would like under the tree this year, what would it be? Not this outfit but what?

That’s a difficult question because it would be this outfit, the triple black or this grey and black. If you look at my early work, I’m one of the early adopters of windbreakers and I was actually going into mountaineering shops, trying to find these mad colour-ways. I’m bringing that back to the table, it’s got to be this one and the triple black windbreaker.

Have you ever had someone ruin your Christmas?

Yeah, Santa has a few times. Do you know what happened one Christmas? I was only young and everyone kept getting these Game Boys and there was a platinum version. I had a little Christmas list, with Gameboy written and a big star next to it, that’s what I wanted. I got a fish tank and a goldfish, it was a sad, sad day. I was annoyed with Santa Claus. Let’s just put it that way. I mean, you’ve got to try and appreciate it because part of you still thinks ‘oh maybe it’s my parents that got it’, you know? I tried to appreciate it but there was still sadness going back to school. Then the [goldfish] died about six months later, the whole thing’s a nightmare.

Yeah quite, I’m somebody that when I’ve got my visions set on something, I’m getting to where I plan to go. Some kind of competition I can kinda let go over my head but some competitions I’m serious about.

As a child, what game would you take on your whole family and win at?

Monopoly is a good game and then sports, probably boxing; I like boxing.

How important was that competitive spirit coming up in the music industry?

Can you let someone else win a game?

Depends on who the person is and the reason I’m doing it is because a lot of people perform well when they’re confident. So if I’m trying to help somebody along I may let them win if I feel like they need to be more confident. If it was a family member or a really close friend, other than that I’m just looking to whoop everybody all the time.

Is failure an option?

It depends really, you can break yourself with that, you can do too much of the competition thing and sometimes you’ve got to take the losses as learning. So failure is kind of an option because there have been times where I’m like, “failure is not an option” and then I’ve lost and it’s completely thrown me off. Because I couldn’t wrap my mind around the fact I’ve lost whereas now I accept my losses and learn from them and try to come back stronger.

If you had to beat someone to win a prize and you could pick the game, what game are you picking to win?

One of them driving simulators, a realistic one. Or maybe a shooting one, but I’d settle for the driving one.

Watch Bugzy Malone in the JD Christmas campaign ‘King of the Game’, with JD exclusive product drops available online at jdsports.co.uk and in stores across the UK now.