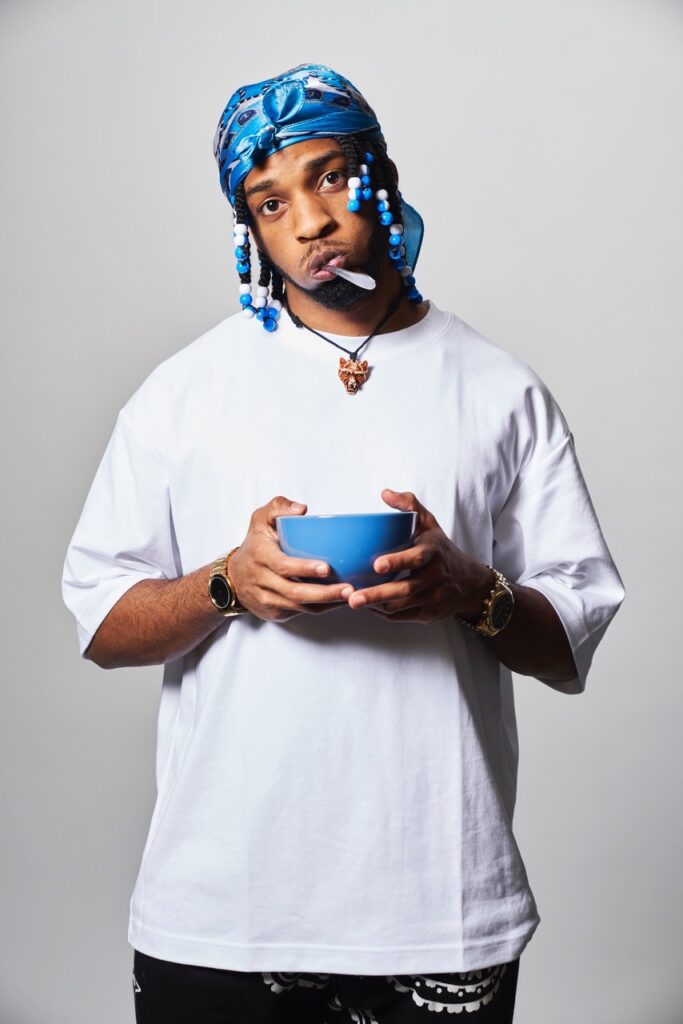 Def Jam signee Armani White went viral with his 2022 hit, ‘Billie Eilish’, he talks to VIPER about what’s coming next…

Who is Armani White?

A big ass kid who is having way too much fun being a rapper right now.

Did Blanco come before White and where did the name come from?

Nah, White is my last name and my family’s name. Armani White was taken when I was making an instagram so I used “Blanco” instead.

I used to play sick so I could watch MTV and BET play music videos and I would fake like I was them. My dad had ‘Word Of Mouf’ playing in the house a lot but one of the biggest moments for me was when I heard ‘Kill You’ by Eminem. That was the match that sparked the idea that I could do it too.

In West Philadelphia born and raised — what has growing up in Philly meant for you?

Growing up in Philly helped me decide exactly who I wanted to be, being exposed to so much at an early age. It was rough at times but also super inspiring. It instilled a hustler/go-getter mentality in you at a young age. I was selling gum and burnt CDs in elementary school to the other students.

What does Batcave studio mean to you?

Batcave was the home of hip-hop when I was growing up in Philly. All the legends would come through the Batcave: Will Smith, Meek Mill, Gillie Da King. It felt like the barbershop but with a booth in it. You got to be in the room where all of your favourite Philly artists were and become a piece of that history. Batcave helped me a lot with learning who I was and being confident in my music and my voice.

Did you think Billie Eilish would be as commercially successful as it has been?

I did, I just didn’t know it would happen that fast. In 6 months we’re GOLD in 2 countries (USA and AUS) and Platinum in Canada. It’s a record I knew people would gravitate towards but I didn’t anticipate it being a worldwide record right at the release of it.

What was the creative process of ‘Keep in Touch’ and what was the significance of this period in your life?

I lost my father during the creation of this project! So the music became a process of healing. I wanted to make a piece of music that was less about mourning the death of my father but about celebrating his life. The album altogether was used to immortalise my father.

What was it like signing for Def Jam Records and how did it come about?

It was honestly exactly what I was looking for. I had done everything as an independent artist and I was ready to graduate. So when I was ready to make that decision I wanted to find the perfect ‘Partner’ who I would work hand-in-hand with to become the biggest artist. I sat with my brother Tunji, who I’ve known for years now, about it and it made all the difference from the other labels. He understood the agenda and that it was bigger than one song but more about the career.

In your own words, how would you describe “happy hood music?”

It’s my unique way of telling my story of pain and trauma, in a fun and palatable way that kids can make TikToks to haha. The music reflects my childhood, a happy home in a dangerous neighbourhood. It’s a juxtaposition of being from an environment but not becoming your environment. And the idea of hope, to look into a sky full of clouds and find the sun.

It’s clear your mama means the world to you. What lessons has she taught you that have carried you through your career so far?

My mom is my world! She’s taught me how to love unconditionally and strive no matter what your situation is. But she’s also a well of information, who is always around to remind me of the important lessons, moments and values in my life.

When it’s all said and done, what do you want the world to say about Armani White?

He changed the world! He was the greatest to do this shit [laughs].

What can we expect from Armani White in 2023?

A lot more music. My main goal for next year is to multiply everything we did this year by 3x. Full projects. more videos. More shows.