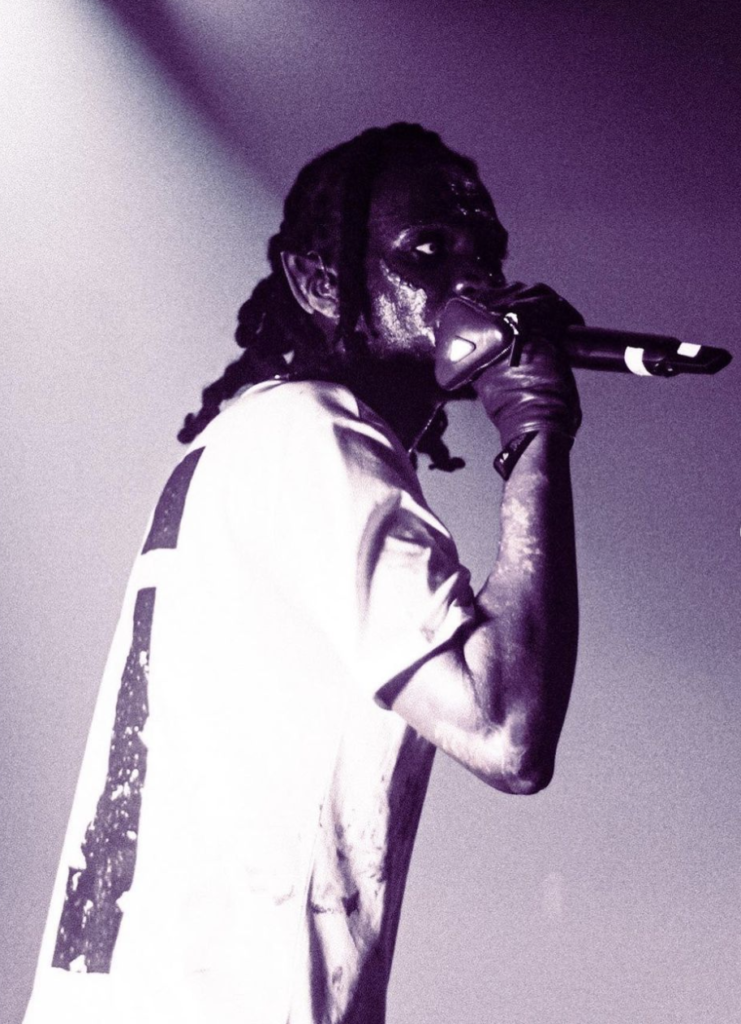 Lancey Foux is fast becoming one of the most exciting prospects in the UK rap scene with a unique and exciting sound which was further developed on his new album ‘Life in Hell’. Having recently worked with some of the biggest names in the industry like Kanye West and Skepta – the sky is the limit for this artist.

In support of his new album, Stratford-born rapper Lancey Foux brought his ‘Life in Hell’ tour to HERE at Outernet for two high-octane shows. Viper went to show number one to report back with the best things from the event.

The immersive and intimate venue in Soho officially opened this year in early September and provides the perfect space for small concerts. With huge screens at the front and lighting strips down the side, the gig experience is elevated by HERE at Outernet and Lancey Foux certainly made the most of the exciting space.

As the lights dimmed, chants of “Lancey, Lancey, Lancey” rang across the venue. Suddenly the heavy Trap beat of ‘WORLD ON FIRE’ dropped and the mosh pits opened and the glorious carnage unfolded, with sparks flying from either side of the stage and whirling space visuals adding to the experience.

The crowd were taken through an immersive journey into the depths of Hell, with the big screen at the front of the stage displaying a door which led to fiery pits that mirrored the intensity of the beats and atmosphere perfectly for the first part of the show.

Ragers in the building:

Even from the action during the support acts, it was clear that the night was going to be full of wild dancing and mosh pits, and it certainly was. The pits in the intimate venue were sweaty and intense, but everyone was on the same wavelength, which created a special atmosphere bouncing along to Lancey.

Lancey is in his own lane:

Rap music in the UK has become quite oversaturated in recent years with a lack of variety or individual flair in the genre. However, when Lancey Foux came out on stage in purple face paint like he wore to the GQ Awards the night before, looking like something in between an Avatar and Nightcrawler from X-Men, It was clear that Lancey is very much his own, unique artist, and this is part of the reason why he has built up such a legion of fans.

Lancey Foux released his debut album in 2015 but only in the last couple of years has burst on the scene in a big way, and he has now built up a core of cult fans because of this. The atmosphere was buzzing before the show with attendees discussing the artist and how great they expected the show to be. It is a loyal group of fans that many artists would be jealous of.

Not a one-trick pony:

The East-London artist is perhaps best known for his heavy Trap songs, but he has great variety in his music which is what makes him such an engaging performer. He sung melodic songs like ‘PENDULUM’, which features a sample from Seal’s ‘Kiss From a Rose’, and ‘COLOURS’, both from his new album.

The show seemingly ended in a tame manner which didn’t feel fitting for such an exciting and intense performance. He went off stage and sang his thanks to the crowd in autotune over the speakers, and then the audio cut and he shouted “Dafuq!” He proceeded to run back onstage to perform ‘Al Capone’ which was a much more fitting finale, and the mosh pit opened one last time.