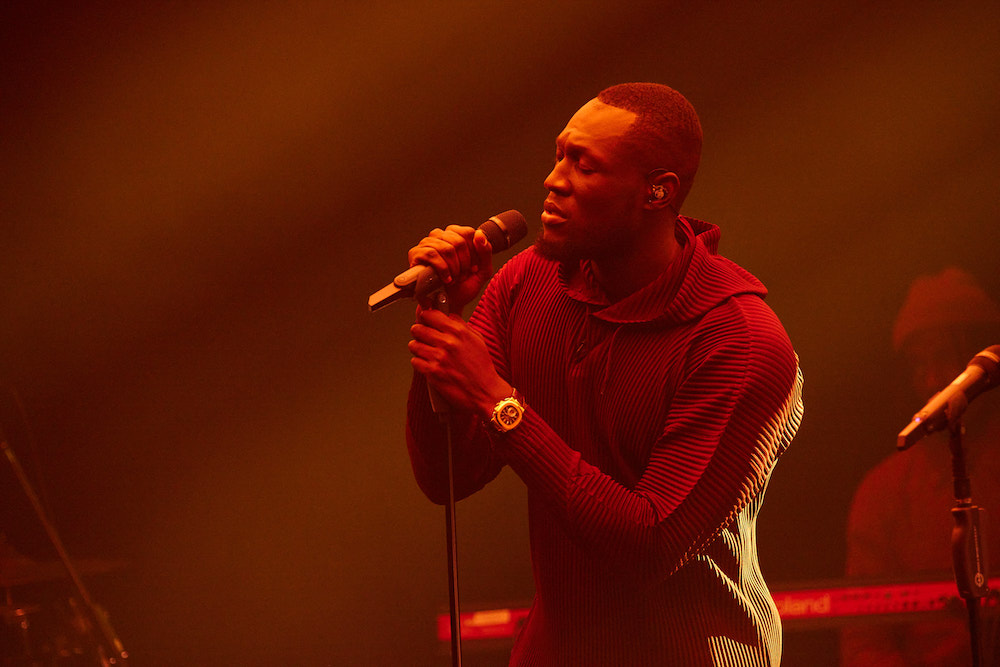 Yesterday, Amazon Music’s +44 presented ‘Stormzy: This Is What I Mean – Live From the Queen Elizabeth Hall’ – an immersive showcase of Stormzy’s highly anticipated album during a special show. Fans can watch the show tonight (30th November) on the Amazon Music UK channel on Twitch and Prime Video at 7pm GMT.

The show, hosted by Julie Adenuga sees Stormzy discussing his new era in his own words, talking in depth about the musicality of his album, the creative process, the future and much more along with performances of ‘Firebabe’ ‘Hide & Seek’ and ‘Holy Spirit’ alongside exclusive first performances of ‘Please’, ‘My Presidents Are Black’ and ‘Give It To The Water’ from his new album.

As Julie kicked off the conversation, Stormzy said it felt “weird to perform in front of the mandem,” as famous faces like Wretch 32, Sampha, Mo Gilligan, Zeze Millz, Jazzie B, Avelino, Michael Dapaah and more looked on. He revealed he felt at peace recording this album, with no first album nerves or none of the anticipation he faced around his second album or his Glastonbury headline performance – he seeks no validation with this music and stated it was the most “selfish album” he’d made.

Stormzy talked about taking a break after 2019 to reflect and to grow; that year saw him headline Glastonbury (“a defining moment, the biggest moment for me, I can’t describe the feeling”) and release his second album. He stated he didn’t want to be a “manchild” but work on bettering himself.

Wretch 32 asked how Stormzy whittled down the tracklist, to which he said “music should be testament to feeling – if it felt good, we did it.” He denounced fake freedom and the need to write songs for certain reasons, instead saying “if I want to make a dancehall album, if I want to make a country album, I’ll do it.”

The final question came from British legend Gabrielle, who asked what Stormzy wants his legacy to be. Paraphrasing Zadie Smith, he said he “hopes he contributes to the vast river of British music, culture and art.”

‘Stormzy: This Is What I Mean – Live From the Queen Elizabeth Hall’ is Amazon Music’s second collaboration with Stormzy around the release of his third album ‘This Is What I Mean’, released via 0207 Def Jam on 25th November. The ‘This Is What I Mean House’ saw Stormzy and Amazon Music’s +44 host a free to attend three-day pop-up space in London’s Regent Street from 25th-27th November, featuring live conversations with Stormzy, performances, a merch shop, an immersive listening experience for fans and more. Ticketholders heard Stormzy talk about the making of his new album during a special live conversation alongside other contributors, watch an exclusive performance of ‘Holy Spirit’ which features on Stormzy’s new album, plus much more.

Earlier this month, Amazon Music revealed that Stormzy was among the artists to release brand-new Amazon Original tracks for the Christmas season, available exclusively on Amazon Music. Stormzy’s Amazon Original Orchestral version of ‘Firebabe’ featuring Jacob Collier and Debbie, recorded at the iconic Abbey Road Studios, is available to listen to here.

+44 is Amazon Music’s flagship Black music playlist brand and exists as a space to celebrate and amplify Black music genres, the artists that make the music, as well as the culture behind it.  It connects audiences to the artists they love via original content, livestreams and exclusive access.  It has expanded into genre specific playlists including +44 AFRO, +44 RAP, +44 R&B and +44 FLOW alongside the +44 Podcast and sponsorships such as Rampage’s stage at Notting Hill Carnival. Each week in the +44 Podcast, Zeze Millz and Sideman are joined by some of the biggest names in Black music, sports, film, TV and culture, tackling some of the hottest issues of the week – from the biggest stories to hit the news agenda – to the latest releases across music, film or fashion. The +44 podcast and Instagram account provide a platform for guests to add their voices to the latest cultural debates, and to join the hosting duo as they celebrate Black culture in the UK.