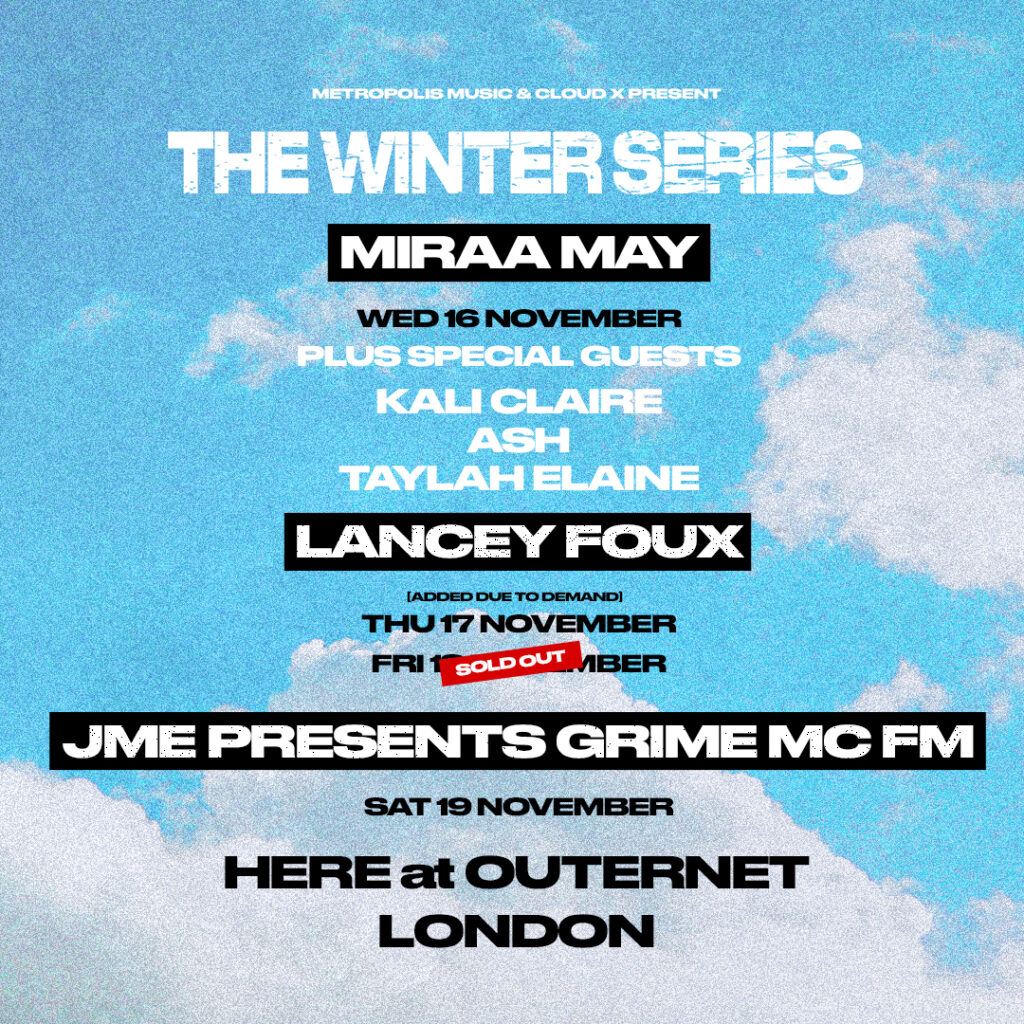 Metropolis Music and Cloud X have teamed up to bring you a heavy-hitting four date season featuring trailblazing artists Miraa May, Lancey Foux, and Jme.

First up is an unmissable headline show from Tottenham songbird Miraa May. The British-Algerian is one of the finest UK RnB artists of the moment. The GRM Rated nominated singer made her name with her astute debut EP ‘N15’. Her inventive debut album ‘Tales of a Miracle’, released this year, delivers more of her unapologetic candour and heartfelt lyrics. Support comes from Cairo-born Montreal-based Ash, rising East London producer and musician Kali Claire, and RnB and dancehall party-starter DJ Taylah Elaine.

To say the Plaistow-born rapper and model Lancey Foux is blowing up would be to understate it. Fresh from a recording tour of the states, the UK rapper, creator and style icon has collabs which include Skepta and Lil Yachty and fans which include Playboi Carti and Kanye. His fast and furious flows and glitchy beats have engendered a staggering following – assisted by modelling contracts with Givenchy, Alexander McQueen, Mulberry and other top-line designers. Lancey Foux plays a two-night show for this series – after selling out the first date in minutes, a second date has been added – with support from the untouchable UK drill badman Kwengface.

The final night sees a takeover from experiential pirate radio Grime MC FM – founded and hosted by the irrepressible master of ceremony, Jme – a veteran and trailblazer in UK grime. Always raw, always reactive, always spontaneous, Grime MC FM is no staged show: it’s about the business of bars. Who’s coming through the radio on any given night? Find out only on the night. Expect big things.

Cloud X is an international music entertainment company built around a London-based record label. Setup by LGBT+ & POC founders, they platform exceptional artists and develop their genius. They are committed to being diverse, inclusive and progressive.

HERE at Outernet is a brand-new live event space; a hidden four-story venue under the centre of London – part of the cities new Outernet district. The custom-designed blank canvas space is crafted to host creative and cultural events from end to end of the live events spectrum.