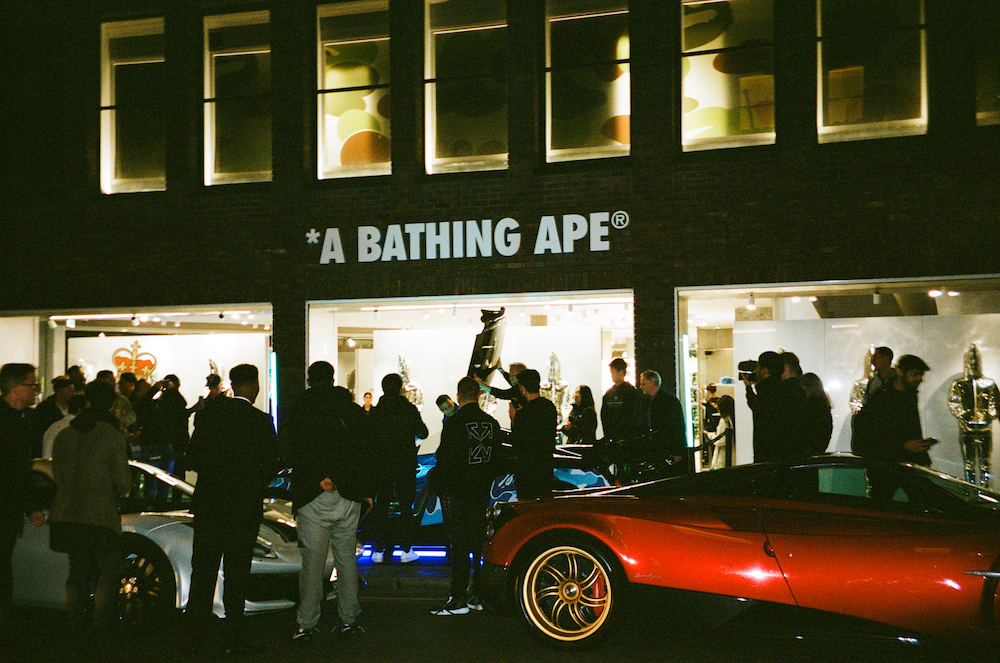 After the first capsule collection celebrating the Pagani Zonda 20th anniversary, BAPE returns with a new partnership to bring street style to the heart of the Hypercars made in San Cesario sul Panaro. The renewed partnership with BAPE has led to the creation of a limited-edition capsule collection for the Pagani Huayra Roadster BC, whose colour palette and style have been used at the request of a client to “dress” a bespoke version of the model. The collection is looking to come out now at the end of December.

Known for playful use of colours and graphics, it’s refreshing to see BAPE® curate a new capsule collection for the Pagani Huayra Roadster BC.

The collection will be sold on Paganistore.com, in BAPE STORE®, and on BAPE.COM; this includes a limited range of selected high-quality items with a powerful personality, including a zipper jacket, a polo shirt and a t-shirt, sneakers, a cap and an aluminium keyring.

The camo print is repeated on the lining of the jacket, on the sleeves of the polo and t-shirts, on the peak of the cap and on the uppers of the sneakers, the epitome of an exclusive and recognisable style, just like the design of Pagani Hypercars. The partnership is sealed with a special patch showing the two brands.

The Huayra Roadster BC by A BATHING APE®:

The BAPE® version of the Huayra Roadster BC reproduces the BAPE® ABC CAMO pattern in shades of blue inside the car on the seats and the roof, and also on a set of coordinated luggage and sports clothes including a tracksuit and gloves. For the launch, the body of this special Huayra Roadster BC was wrapped with the camo pattern, linking the car to the capsule collection. The BAPE® name also appears on the registration plate of the Hypercar as the mark of an unprecedented collaboration.

Horacio Pagani, founder of “Pagani Automobili”, was present at an event at the BAPE store in London to unveil the car that is at the forefront of the collaboration. Attended by some of the biggest names in UK media, including internationally renowned DJ Kenny Allstar, as well as presenter Craig Mitch, the face of ‘Sneaker Shopping’, the event saw a celebration of the collective efforts of each brand.

Each guest was greeted with a BAPE X Pagani cupcake, displaying the same blue colour of the camp wrap on the Pagani Huayra Roadster that was situated outside the store, as well as the iconic Baby Milo BAPE logo.

The event was a celebration of the innovation that both brands bring to their respective fields. The Pagani X BAPE car situated outside the store made for a great talking point and garnered interest not just from those attending, but also from passers by. The collaboration is significant in the fact that both brands are leaders in their field, offering up products that break the moulds of tradition. For these two brands to come together therefore further challenges the concepts and customs traditionally associated with their fields, creating an overall result that disrupts the norm and innovates in doing so.