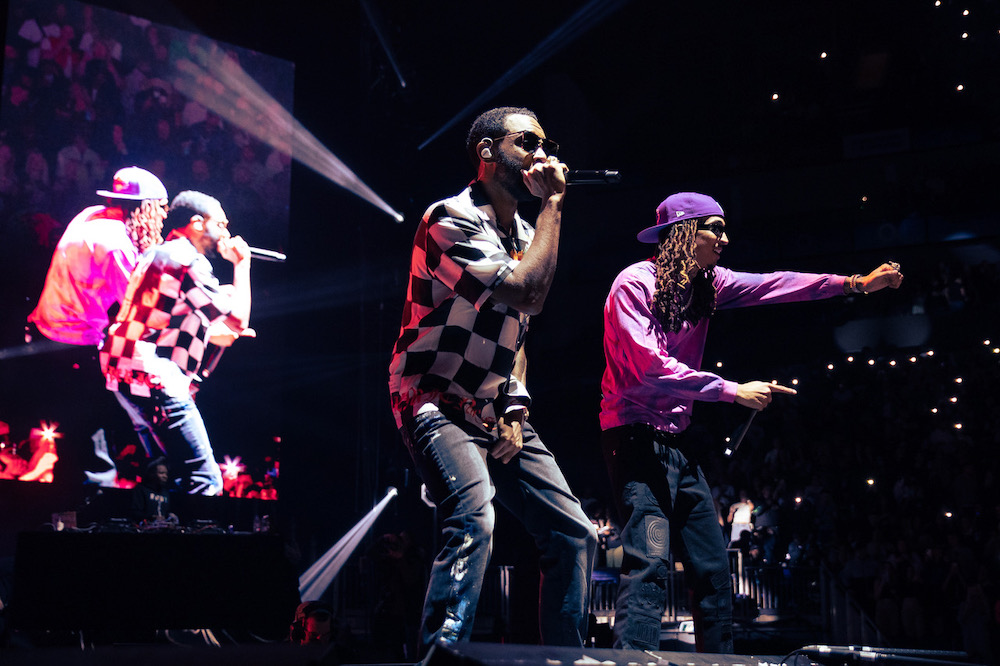 Despite all the delays with tube strikes and traffic in London, fans came out in their droves to party with one of the biggest names in the UK scene, D-Block Europe, for the opening night of their tour to support their latest album ‘Lap 5′. VIPER list the nine best moments…

South London DJ Kenny Allstar got the party started in perfect style with nonstop hits, with everything from classic artists from the 2010s like Rae Sremmurd, Fetty Wap and Bobby Shmurda to more modern bangers from Pop Smoke, Digga D and Central Cee. The energy in the crowd was electric and set a beautiful template for how the evening was about to unfold.

The lights dimmed in the sold-out O2 Arena and the anticipation was building, when D-Block Europe suddenly appeared from under the stage as they launched into ‘If I Ruled the World’. The energy was turned up with a flurry of songs like ‘Destiny’, ‘No Competition’ and ‘Conor McGregor’, as the crowd got hyped up, creating a special atmosphere.

Throughout the show Young Adz and Dirtbike LB got the crowd involved by calling for mosh pits and getting people to light up the arena with their torches for songs like ‘Bankroll got Bigger’, which got everyone involved in the action. Despite being a high-octane atmosphere it was all importantly safe, as Young Adz stopped the concert on three occasions when people in the crowd fainted, to avoid a dangerous situation. He also advised people to drink as much water as possible.

The use of special effects:

The main difference between concerts in arenas and smaller venues is that the artists have more creative freedom to create an exciting atmosphere full of special effects. DBE took full of advantage of this with a show full of strobe lighting, pyro and even choreography dancers which elevated it from just your typical rap concert to something truly exceptional.

In ‘Overseas’, Young Adz says: “I keep a rock band on standby, pull up and drum that shit,” and that was the case at the O2, with an impressive band that added another dimension to DBE’s music. The contrast between the heavy bass that played through the speakers and the live band was quite extraordinary, especially for songs like ‘Elegant and Gang’, which have never sounded better.

Throwback songs for day one fans:

D-Block Europe catapulted into the mainstream in recent years with huge hits like ‘Kitchen Kings’ and the success of their recent album ‘Lap 5′. However, there were also throwbacks for the day ones in the crowd, like their 2017/18 hits like ‘Large Amounts’ and ‘The Shard’, which inspired numerous mosh pits through striking strobe lighting effects.

The tribute to Takeoff:

When the duo took a short break, their DJ played ‘Hotel Lobby’ by Quavo and Takeoff as a tribute to the late Migos rapper who was killed on November 1st. It was a great gesture to take time out of the show to make this tribute for someone that contributed so much to the Trap genre globally, who was taken in his prime.

Young Adz made it clear that the band were rushed for time due to delays from the tube strikes, but DBE saved the best for last with a flurry of their biggest hits from ‘Ferrari Horses’ to ‘Overseas’ to ‘Kitchen Kings’, and ended with a finale to remember as the duo brought on flamethrowers for ‘Home P**sy’.

Whilst there can be difficulties and challenges in translating a Rap concert – especially UK Rap – to a large-scale event, it’s uplifting to see London rappers perform at huge venues as it’s a sign that this is the new mainstream and these acts are here to stay and perform on the biggest of stages.

Check out some pics from the show in the gallery below.

All photos by Ben McQuaide.