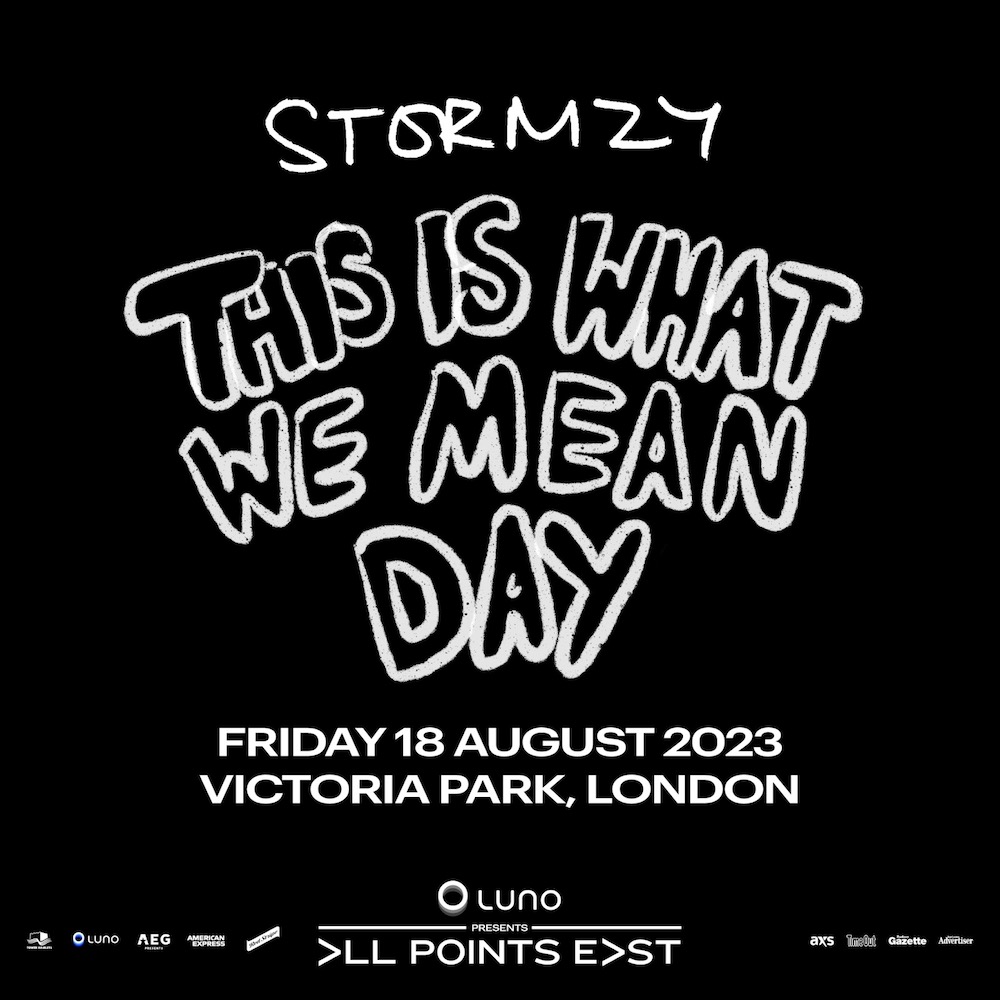 Luno presents All Points East returns with its first 2023 headliner and they don’t get much bigger than thi – Stormzy will headline All Points East on Friday 18th August 2023, and team up with the festival to curate a day of artists for an unforgettable ‘This Is What We Mean Day’.

Stormzy already has had two critically acclaimed #1 records under his belt, ‘Gang Signs & Prayer’ and ‘Heavy Is The Head’, and stands not only as one of Britain’s most accomplished rappers, but one of its most accomplished musicians of any genre and a cultural icon.

The news comes after he announced his highly anticipated third album, ‘This Is What I Mean’ set for global release on November 25th via 0207 Def Jam, featuring the UK Top 10 single ‘Hide & Seek’. Produced by PRGRSHN and P2J, ‘Hide & Seek‘ features additional vocals from British singer Äyanna and Nigerian singers Oxlade and Teni, providing an emotive, soulful and ethereal offering.

And having sold out multiple shows at The O2 and a whole UK tour, Stormzy was looking for something extra special for 2023, to surpass all his live experiences so far.  Featuring his favourite artists, from up and comers to superstars, Stormzy will be announcing a full line up for his very own day, in celebration of his latest album.

As narrated during the announcement video Stormzy states: “I was thinking what’s next, cos we’ve done 3 O2s, shut that down. I said to the team, we gotta do something bigger, something better, something different.  We were having back to back meetings, bouncing ideas.  Then it hit me, I started jotting down ideas thinking – live band, need a live band. August 2023, a summertime thing, outside, for the people, always for my people. So August 2023, Victoria Park, more info coming soon….This Is What We Mean Day. Hard.”

Much of the creative energy that shaped his new album emerged from a Stormzy music camp in Osea Island – a remote island in the Essex estuary that’s only accessible via a Roman Causeway for four hours a day at low tide. Surrounded by leading-edge producers and musicians (who will all be unveiled in due course), each and every morning they would eat and pray together and then spend the rest of the time driven to creative heights by each other’s talents.

Each year, All Points East delivers an epic line up of world class headliners, exceptionally curated supporting line ups and big exclusives. With Stormzy as the first headliner for All Points East 2023, next year looks set to be no exception.

Luno presents All Points East has become the essential London event since its inception four years ago. The quality of artists runs very deep across the days with established names and those on the cusp of stardom entertaining crowds. The 2022 event featured headliners: Gorillaz, APE Presents: Field Day, The Chemical Brothers and Kraftwerk, Tame Impala, The National, Disclosure and Nick Cave and The Bad Seeds.