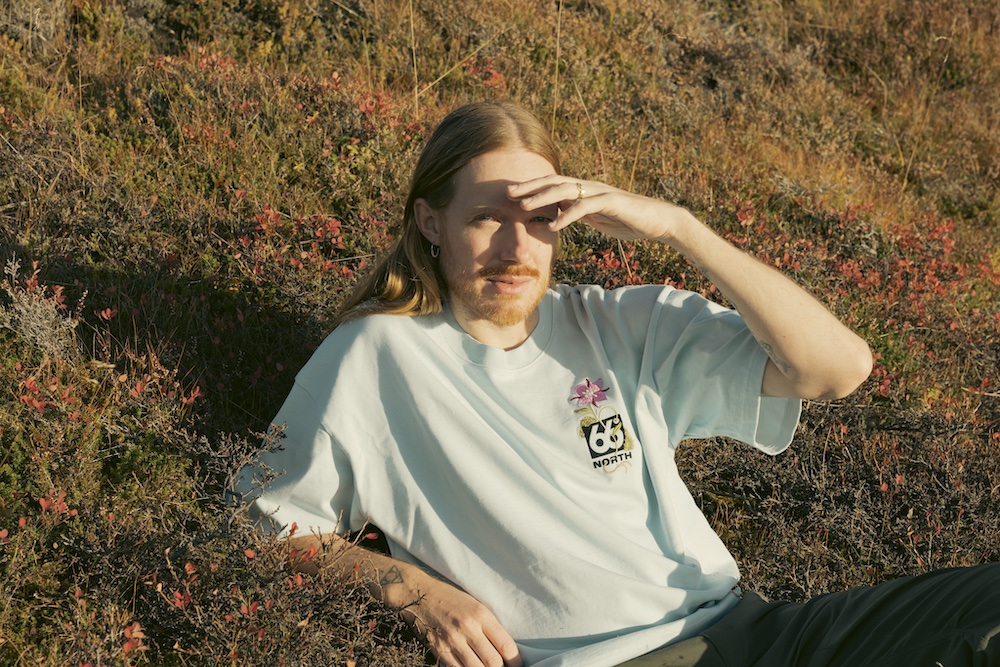 Merry, whose ‘side-line’ – hand embroidered vintage sports tees and sweatshirts – has garnered something of a cult-like following, is originally from the UK but has lived in Iceland for the last decade. His deep affinity with Iceland and its native fauna and ornithology are the inspiration behind the capsule collection, which is divided into two drops.

The first drop, featuring an embroidery of an Eyrarrós, a flower native to Iceland, includes three t-shirt designs in organic cotton, as well as a limited edition fleece and balaclava made using recycled polyester. The pieces will launch exclusively in 66° North Stores and online on the 16th November.

“The flower featured in this design is one of my favourite wildflowers found in Iceland: the Eyrarrós (chamerion latifolium). When encountered in the wild it has such a striking appearance in contrast to the sparse gravelly terrain where it often grows. Beside the inherent beauty of the flower itself, it exemplifies so much of what I love about Icelandic nature – being both tenacious and delicate at the same time.” Says Merry.

For the second drop, he has turned whooper swans and their geo-mapped migration paths between the UK and Iceland into an embroidery. The notion of migratory birds as a connection between the two islands felt fitting for Merry, as well as the brand, ahead of the new flagship venture in London. Excitingly, this is the very first time James Merry has created designs for machine embroidery, making his designs available to a wider audience.

“When I started my series of embroidered floral sportswear some years ago, I made a promise to myself that if I ever did an official collaboration I would want it to be with 66° North. Living in Iceland for a decade, I have often relied on the quality and durability of their garments – and since the majority of my designs are inspired by Icelandic flora and fungi, I could not imagine doing this with anyone else. So I am thrilled to make this dream a reality and release these embroidered flowers into the wild, with a brand that I have admired and worn for many years.”