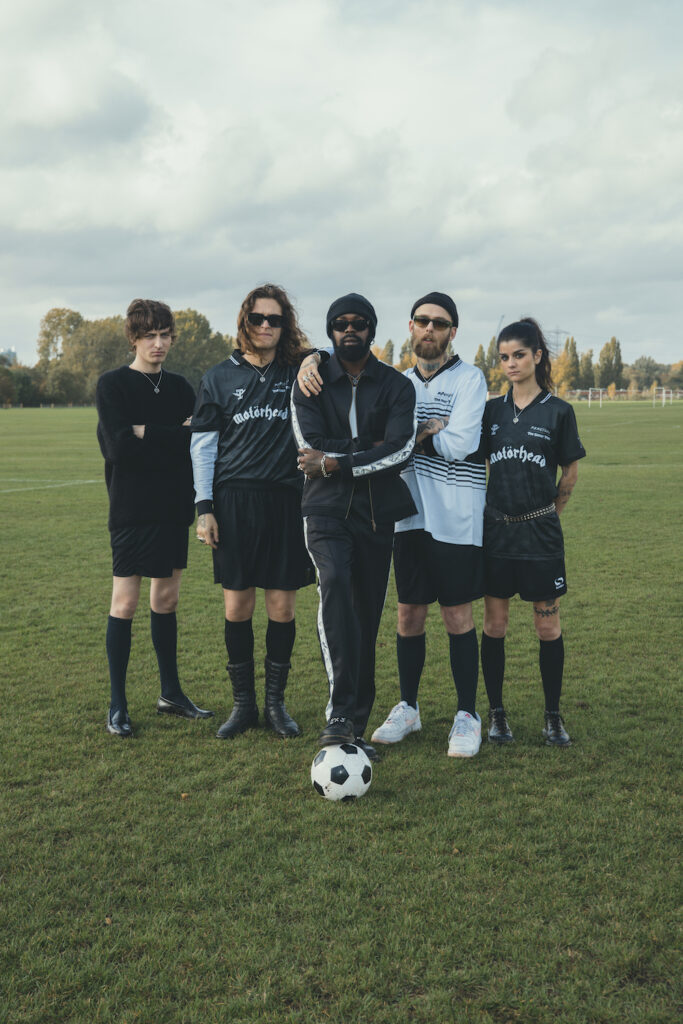 London-based menswear brand Percival has teamed up with fellow Londoners, Rock ‘n’ Roll jewellers The Great Frog on a football-themed collection of clothes and jewellery, just in time for Halloween.

Percival and The Great Frog share core values, subverting the norm in their respective fields, a keen eye for detail, and an innovative approach to fashion. The collection takes football, a sport that most are familiar with, and presents it in an alternative light. The juxtaposition between football and Rock music therefore merges two hugely influential worlds seamlessly.

Both Percival and TGF show an understanding of the culture of football and its supporters within the collection. The vintage style collar on the black jersey harks back to the 90’s, a nostalgic era of football typically associated with Italia ’90, Euro ’96, and the likes of Paul Gascoigne and Alan Shearer. The white shirt also has a similar collar that is mirrored in the shirt design, using monochromatic horizontal lines that border the Motörhead sponsor. Percival have also added some bonus items to the collection, including jewellery, a tracksuit with vertical detailing on the sleeves and legs, as well as a scarf to help represent the atmosphere of the typical football fan.

This band makes perfect sense for the collaboration between the two brands, as Motörhead are one of the most instantly recognisable Rock acts of all time. With songs such as ‘Overkill’, ‘Killed by Death’, and ‘Ace of Spades’, Motörhead embody the subversive, punk spirit of the collection, and elevate the shirts from being merely a homage to a vintage era of football.

Chris Gove, Co-Founder of Percival, stated – ‘Percival and The Great Frog are both independent London based businesses. We have tried to craft products with integrity… so if you put the Percival FC crew through the TGF filter, what you get is a silver snake eating its tail…and in my view, that’s absolutely ideal.’

The collection will be available to purchase online at Percivalclo.com and in-store at Percival Soho from 27th October.