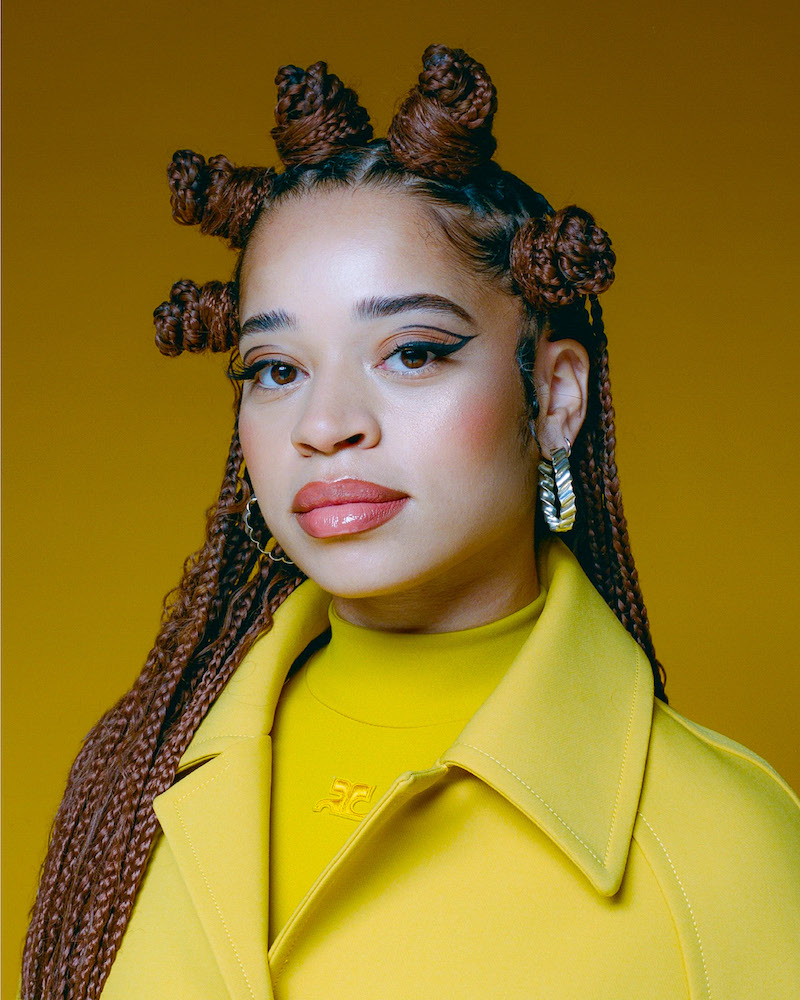 VIPER caught up with Ella in her hometown of London to talk about making an album during the pandemic, reaching out to Mary J. Blige, and her views on the current state of contemporary R&B.

We last sat down with Ella Mai in 2017 and since then the British songstress has carved out a lasting place for herself in the R&B world as one of the most conscious and vulnerable songwriters in her sphere. Since her self-titled debut album, she has been working as hard as ever, releasing her sophomore al- bum, ‘Heart on My Sleeve’ in May [or should we call it Mai now?]. Ella was already asking important questions and telling compelling stories in her music, but she took it to the next level with ‘Heart on My Sleeve’ digging deep into her feelings in the present moment as she made each track. Still working closely with DJ Mustard, Ella’s unique cross-cultural sound has evolved, and while she has made LA her home, she still maintains close ties to her UK roots.

Welcome back to the pages of VIPER!

Thanks for having me, it’s been a while! Like I said to you earlier, it’s been ages so I’m actually happy to be back.

Some say the sophomore album is the hardest album to make, how was it for you?
It was definitely different! It was a bit of a struggle at first, coming off the back of a debut album that was so successful, because when I was re- cording my debut album there wasn’t any pressure. Recording my debut album was before ‘Boo’d Up’ took off so I was really just going in the studio and recording and making music that I love and not thinking about it, then the debut album came and I had a great time, and I got back in the studio and was like “ok, what do I do now?” I had to sit down and be like, “what do I wanna sound like? What do I wanna say?” I was really intentional with the way I was making the music, but I think I was getting in my head a little bit at first and I had to sit down. Mustard was the one that told me, “just go in there and do what you’ve been doing, don’t try and change your process, just go in there and make music,” Once I had that in my head, everything got a lot better and I was just trying not to think of the sophomore curse, as everyone calls it. Once I got into a rhythm because – I was recording during the pandemic, it was quite hard to find a rhythm at first – studios would open and then they would close and then they would open. I know people were doing zoom sessions but I wasn’t really feeling the zoom sessions, so I had to wait til I could get back in the studio. Once I found my rhythm, it was really fun but getting into the rhythm was quite hard.

Was there a topic you hadn’t tapped into yet that you got into with this album?
Yeah, obviously I speak about love and relationships in basically all of my music, but I think this album was kinda like my life in real time more so than the debut album. Like exactly what I was feeling that day, or what I was go- ing through in the studio. It wasn’t even a conscious effort really, it was just what I was feeling. So I feel that I’m way more connected to this one. I love my debut album, don’t get me wrong but I was 20 to 22 making that album and now I’m 27. I think as a woman I’ve matured a lot. As an artist I’m more sure of myself and I think I just dug a lot deeper. It’s a lot more vulnerable than my debut album.

Is there a song that you’re nervous to perform because of your vulnerability?
Yes there’s a couple actually, if not all! But it’s ‘Hide’; the ballad. It’s very vulnerable, it’s not even sad; I feel like the title ‘Hide’ makes it seem like you’re scared, like you’re hiding, but it’s a good hide, like “I feel like I can hide with you, you’re my safe space” almost. But it’s definitely very vulnerable and anytime I hear it, I get taken back to the place that I was in when I recorded it, or how I felt. So I’ve gotta be careful performing that one before I start crying.

Your fanbase would probably feel like that would be quite an epic moment to witness!
Yeah but for me, I’d wake up the next morning like “why did I just do that?” But hopefully I’ll be able to hold it together. I love the song, it’s not a sad song, it’s actually a really beautiful song.

Is it hard to be inspired to write about love when you’re not in love?
No, because you can be inspired by that [too], because that’s a whole different feeling, there’s a whole bunch of experiences that come even when you’re single. Being in love and being in a relationship is amazing of course and then obviously the heartbreak comes and that’s the sad part which makes great music as well. But being single and just exploring and figuring out what you do and don’t like, meeting new people and just living life, that’s an experience in itself; I can draw inspiration from anywhere. But being in love and being in a relationship, I think the songs mean a lot more deep down. If you’re single and you make a fun song, it still means something to you of course, but it’s just a fun song – it’s different categories I would say.

I wanted to ask you this question that I’ve only asked one person before. People often listen to your music in times of heartbreak, but what did you listen to in those moments, as I’m guessing you don’t play your own music at those times?

No I definitely don’t.

So who is your go-to in those moments of heartbreak?

Mary J. Blige, any Mary J. Blige song. The worst thing about being heartbroken or sad is, as sad as you are or as heartbroken as you are, why do we turn on sad music? That’s not gonna help at all, I don’t un- derstand why, as humans, why we do that! You would think we’d put on something that’s fun or can cheer us up. But that’s not what you wanna hear because it’s not what you’re feeling. So I think, any Mary J. Blige song or album. If I’m heartbroken or sad, that does it for me. Also, as much as I don’t think Snoh [Aalegra]’s music is super heartbroken – she makes lovey dovey music too – I think because it’s so smooth and in her voice there’s a lot of emotion, I like to turn on Snoh Aalegra too. But Mary J. Blige definitely.

So can you guess who I asked that question to?

I know. So when I heard her voice on the album I got chills.

You two are like kindred spirits, with the sound and the feeling.

Thank you, that’s a big compliment, thank you.

She’s one of the greatest but I feel you’re definitely in her lineage. So was it a bucket list goal to work with her?
Yeah, the reason why this part made me so excited is because when I finished the album I had all the songs, the story was told through the songs, and I like to tell stories through my music – sometimes I speak on the end of my songs or sometimes the song speaks for itself. But I was like, if there was anyone that I was telling this story to as a conversation, as opposed to making songs and that I would look to for advice in the situations that I went through during this album, who would it be? Someone I look up to, and I was like, Mary. She’s literally the only person that came to my mind and I remember speaking to Mustard about it and I was like, “do you think it’s too far-fetched if I ask Mary J Blige to speak on my album?” And he was like “no,” and I’m like “I’m being realistic here, don’t get my hopes up.” He was like, “reach out to her”, because I’ve actually spoken to her before… I actually have Mary’s number which is wild. It’s actually wild when I think about it.