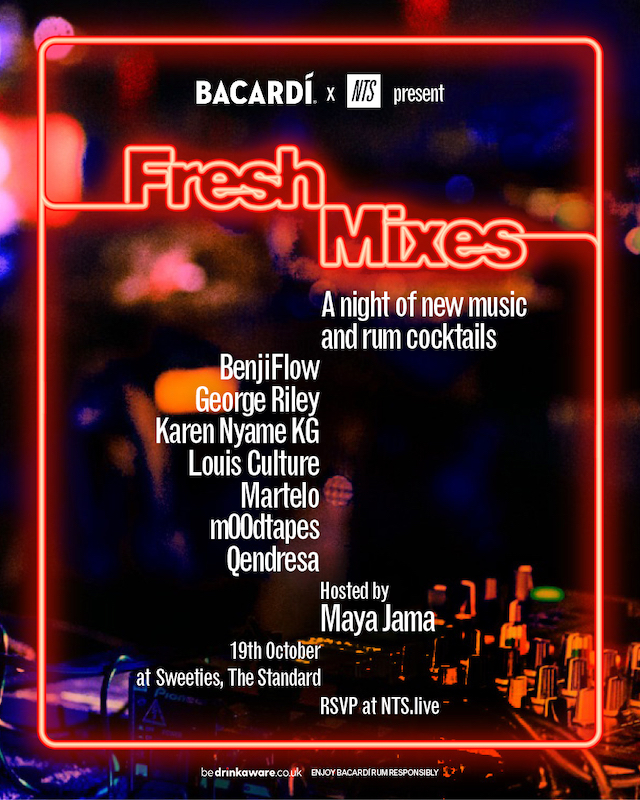 This week, BACARDÍ Rum announced the launch of Fresh Mixes, its new radio show series that will be broadcast live on global music discovery platform NTS, and via the #1 live streaming service Twitch. The show will look to highlight some of the UK’s up-and-coming artists, sharing their best tracks and getting closer to some of the best new musicians with a weekly special guest. With 50% of emerging artists still considered ‘undiscovered’, the partnership will provide a welcome opportunity to shine a light on some of the UK’s best new musicians, in an increasingly commercially driven music landscape.

To celebrate the partnership BACARDÍ has enlisted the help of TV presenter and long-time friend of the brand, Maya Jama, to host a launch party at Sweetie’s, The Standard Hotel’s cocktail bar, on the 19th of October from 7pm.

Guests lucky enough to secure a ticket to the launch party will be able to enjoy a preview of what you can expect on Fresh Mixes with live performances from headliner BenjiFlow, Louis Culture and DJ sets from Dee Combes and Qendresa. There will also be a selection of BACARDÍ ’s best cocktails.

Free tickets for the launch event are available via NTS.com, on a first come first served basis. Attendees must be 18+.

For those who can’t get their hands on a ticket, they’ll be able to tune into BACARDÍ x NTS Fresh Mixes every Wednesday from 2nd November to 16th November 2022. The show will be broadcast live on global discovery music platform NTS and via #1 live streaming service Twitch.

Each show will be hosted by NTS resident Scratcha DVA, aka Leon Smart, one of the most forward-thinking minds on the UK music scene. He’ll be serving up the best new music from UK artists, alongside chat, BACARDÍ cocktails and special guests – everything rum fans need to turn up their Wednesday evenings.

The inspiration behind the partnership is founded in the longstanding commitment BACARDÍ gives to supporting musicians across the globe. Most recently this saw the fourth evolution of the brand’s legacy program Music Liberates Music, to champion emerging voices in the music industry. First launched in 2017, the BACARDĺ Music Liberates Music program has a long history of empowering emerging artists by matching them with established change-makers in the field. For this year’s initiative, new tracks were created with local artists, including BenjiFlow in the UK, and these songs were dropped using a new kind of music distribution model – the Wearable Album. The first-of-its-kind capsule collection features embedded QR codes integrated into each piece that turns music fans into walking promoters for up-and-coming artists.

The first instalment of Fresh Mixes will feature London based singer, songwriter, and producer BenjiFlow, where he’ll be discussing his latest release ‘Ruby’, produced during his participation in BACARDí Music Liberates Music programme earlier this year.

You can tune into the BACARDÍ x NTS Fresh Mixes via the NTS’ Twitch channel every Wednesday from 2nd November to 16th November 2022 via https://www.twitch.tv/ntsradio.