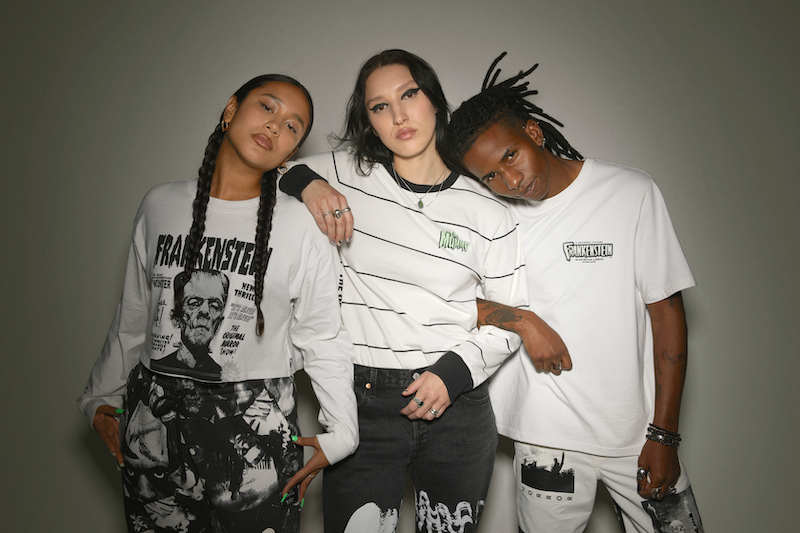 What would Halloween be without something to give you a few goosebumps? A spine-tingling monster or two is exactly what’s needed during the scary season. And Levi’s® has just the thing thanks to a new collaboration with Universal Monsters, the collection of original horror films from Universal Pictures that brought you Frankenstein (1931), The Bride of Frankenstein (1935), and The Mummy (1932), three legacy films that inspired an entire cinematic genre.

For Fall 2022, the icons of horror meet icons of style in a brand-new collection that celebrates some of the greatest monsters to ever appear on the silver-screen. The Universal Monsters x Levi’s® collection features a lineup of denim, tees, sweats, tops & accessories that combines classic Levi’s® silhouettes with archival graphics & text from the original posters of these iconic Universal Pictures films. It’s a collaboration that’s as memorable as the movies that inspired it.

Essentials from the collection include a black rinse Levi’s® Trucker with a back graphic of Frankenstein’s monster, a white Chore Coat covered in images from all three of the films, a black Crew Sweatshirt with a graphic of the original poster for The Bride of Frankenstein, and a hoodie with an all-over print featuring all of the Universal Monsters. There’s also a white Stay Loose Carpenter pant with Monster graphics, an all-over print Jogger, plus a black rinse 501® jean with a giant graphic of The Bride of Frankenstein. Finishing off the collection are a range of tees and accessories—including a Beanie, a Bucket Hat, a Tote, and a Levi’® Sling bag—featuring graphics from the films.

Almost a century after their release, these three cinematic masterpieces are still a chilling adventure for any Halloween movie night. And, as it turns out, a perfect graphic approach for the ultimate dedication to Hollywood’s golden era of horror, made modern.

The Universal Monsters x Levi’s® collection launches globally on October 3rd and will be available for purchase at select Levi’s® Stores, on Levi.com & the Levi’s® App. The assortment includes men’s, women’s & gender-neutral styles and is offered in a wide range of sizes.