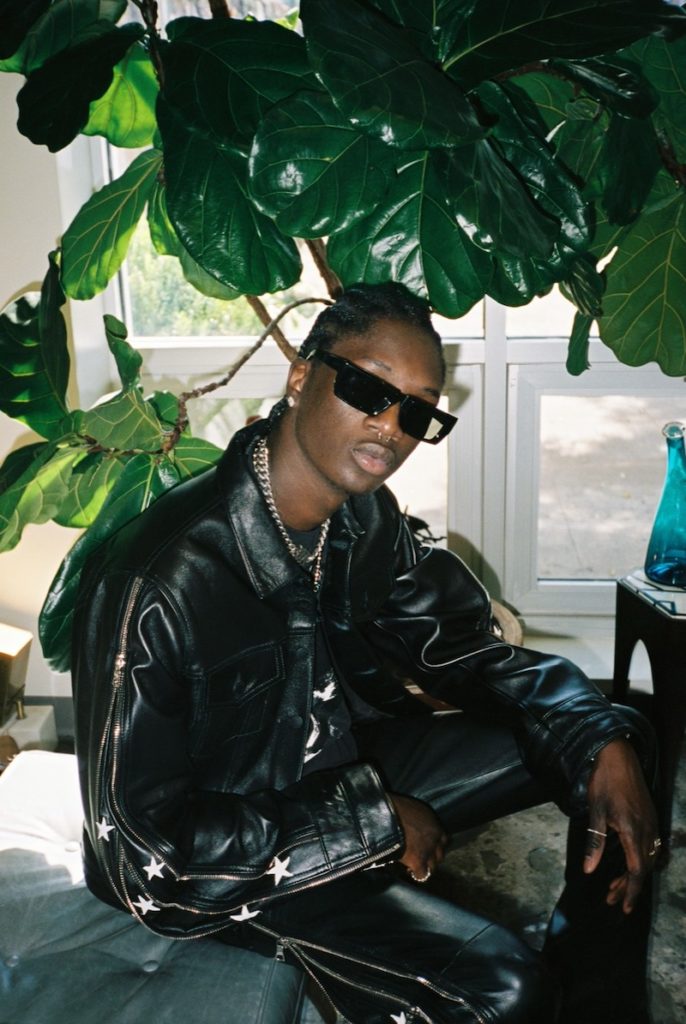 Gambian-born rapper Jnr Choi rocketed to global success with the viral ‘To The Moon’, a song streamed over half a billion times. He has since gone from strength to strength with features from the likes of Gunna and Fivio Foreign, plus his current tour with SAINt JHN. The model-turned-rapper talks to VIPER about his global success, huge collaborations and what’s next for the rising star.

“There isn’t one person in the World that doesn’t know our song”- Jnr Choi: The rising star of Trap.

How did you get started as an artist?

I was just inspired by one of my friends who used to come over and just rap. They’d come and put a beat on and showed me their songs so it was around me for a while. Then one time there was this girl that I was seeing, she lived abroad so we FaceTimed and she was like,”You look like a rapper, you should be a rapper.” I was like, “Ight, let’s do it!” So then I took what I learned from those guys, I was with one of them and said, “Let’s do what you guys have been doing every day.” We made a song in a couple of hours and shot a video within the same week, recorded it the same week and [put] it out. It did well, got about 70,000 views. From there I made another song, I sat down and got a beat off YouTube and wrote down the lyrics and got it recorded and that process made me fall in love with it and made me think this is something that I could actually do. That song was called ‘Moves’ and it was the first song I released on all platforms. Then I had a performance a week later and when I performed the song and saw the reaction, I realised this is definitely something I could do for a living.

Where did your musical influences come from?

I listen to almost everything, especially growing up there was lots of music in my house. There’s always been music around me. My dad used to listen to a lot of Reggae and my mum used to listen to a lot of Senegalese/Gambian music and we’d all just be listening to stuff on the TV all the time. When I first started dabbling into it and searching for music it really started with Hopsin and SwizZz and then I started getting into Big Sean, Kendrick Lamar and The Weeknd. The Weeknd was one of the first artists that I looked up to. He wasn’t in the same bracket and lane as the ones I am seeing on TV with people like Shakira, so that’s when I took a proper interest in alternative music.

How did you develop your sound? You started with ‘Moves’ which was quite Afrobeats/ R&B but now it’s developed into more Drill and Trap.

When I first dropped ‘Moves’, I thought it was a really good song and a lane that I could take but I also don’t only listen to Afro R&B, I also really enjoy Trap and Heavy Trap, Rager music. I enjoy that Future, Playboy Carti with that running and jumping around. So I had to make the decision of what kind of lane I wanted to put myself in. I did my research and then I had to decide whether I wanted to continue making Afroswing or just really build such a discography that I can actually release whatever I want in the future. Straight from ‘Moves’ I went left and went towards Trap and then I brought some of the Summer stuff back in hints but I kept it quite Trappy. Then as we approached the summer of 2021 that’s when I put out a whole Summer tape so all the inspiration from ‘Moves’ developed into that, to show levels of Afro R&B that was my ‘light phase.’ Then I was about to tap into the ‘dark phase’ with a project with twelve tracks that ‘To The Moon’ was on. The whole tape was a mix of Drill, Future and Carti Trap with a couple of Rap songs just to show that side of my versatility. I didn’t get to release the entire project because ‘To The Moon’ did so well and then life got busy. That was kind of the reason why my music genre is not really a genre that I was just basically painting out a picture, which I’m still gonna continue to do just paint out pictures and show what we can really do it all.

Congrats on the big success of ‘To The Moon’, it has hit something crazy like half a billion streams. Is this surreal to think of these numbers and the success of this song?

It’s crazy, I was thinking about it earlier that there isn’t one person in the world that doesn’t know our song. My Uber driver doesn’t speak English much but if I play him my song he will be like, “Oh yes I know this one.” It happens so many times but it’s definitely crazy.

We’re in a whole new industry now with TikTok, does this change your creative process on how you write songs to get that 30-second / 15-second snippet? Or does this come as an afterthought?

Personally, I don’t. It’s definitely an afterthought, I don’t apply it to my creative process.

We were talking previously about how you’ve gone towards Drill and Trap, do you think this is why you probably resonate more with an American audience with collaborations with Gunna and Fivio Foreign?

One of my main goals was to really bridge the gap. I know there are a few artists doing this but to be able to go to the States and be listened to casually is my target. For the UK songs to be released and it’s not weird, just to be heard and it can still fall under the same genres that we listen to on a day to day basis. The States was my biggest target audience and with ‘To The Moon’ it was the biggest audience we had by far, New York, everything! We’re going to do more and more until it is normal for UK artists to be able to release music globally.

What was it like to be in the studio with Fivio Foreign?

Fivio is fire, his process is beautiful! He just goes in and starts rapping. For ‘Amused’ I ran to New York real quick for some promo for ‘To The Moon.’ It was funny, I was just sitting down for dinner at the hotel and Fivio texts me saying ‘Studio, let’s go.’ So as soon as I sat down, my bum just went straight back up, I had to leave my boy at dinner. I went to the studio and there was a session with him and another artist and they were in it, really making some fire stuff. I was playing some other stuff in another room and Fivio heard it and said, “I want to do that, I want to jump on it right now, it’s the next track I’m doing!” I was like, “fire, run it!” I played it out loud and the whole room was vibing and really feeling it. I didn’t even realise it was a hard song. He ran in and laid his verse, he went into the booth and came out 15-30 minutes later and just shocked me and shocked the whole room, I was like, “Fivio, you really went hard.” Yeah it was just a vibe in the studio man, good time!

So you’re on tour at the moment with SAINt JHN, what’s that been like?

It’s a beautiful learning experience. This has been the one and only time in my life that I’ve been able to perform almost every single day and tighten up my skill. Every day is new, new audiences and some may be bigger than others and how you deal with that. Also just having such a great mentor to look up to and watch whilst he’s performing. Then when we are one on one and him understanding my position when we are talking, he’s a very wise man as well so every conversation with him I get something from.

I guess you took off in similar ways with songs that went viral, him with ‘Roses’ and you with ‘To the Moon’

That’s it. SAINt has got a hardcore fanbase, which I really liked. That’s what I’ve looked up to before I even released ‘To The Moon.’ When I was first starting to make music I was looking at my possible inspirations and SAINt JHN was way up there with how he’s built his audience organically and how the sound is so specific to him; you hear his voice, you know it’s him. His style is just his own. He does what he wants and yeah, it’s just fire to be on tour with him right now.

What’s next, do you have any new songs or an album coming out soon?