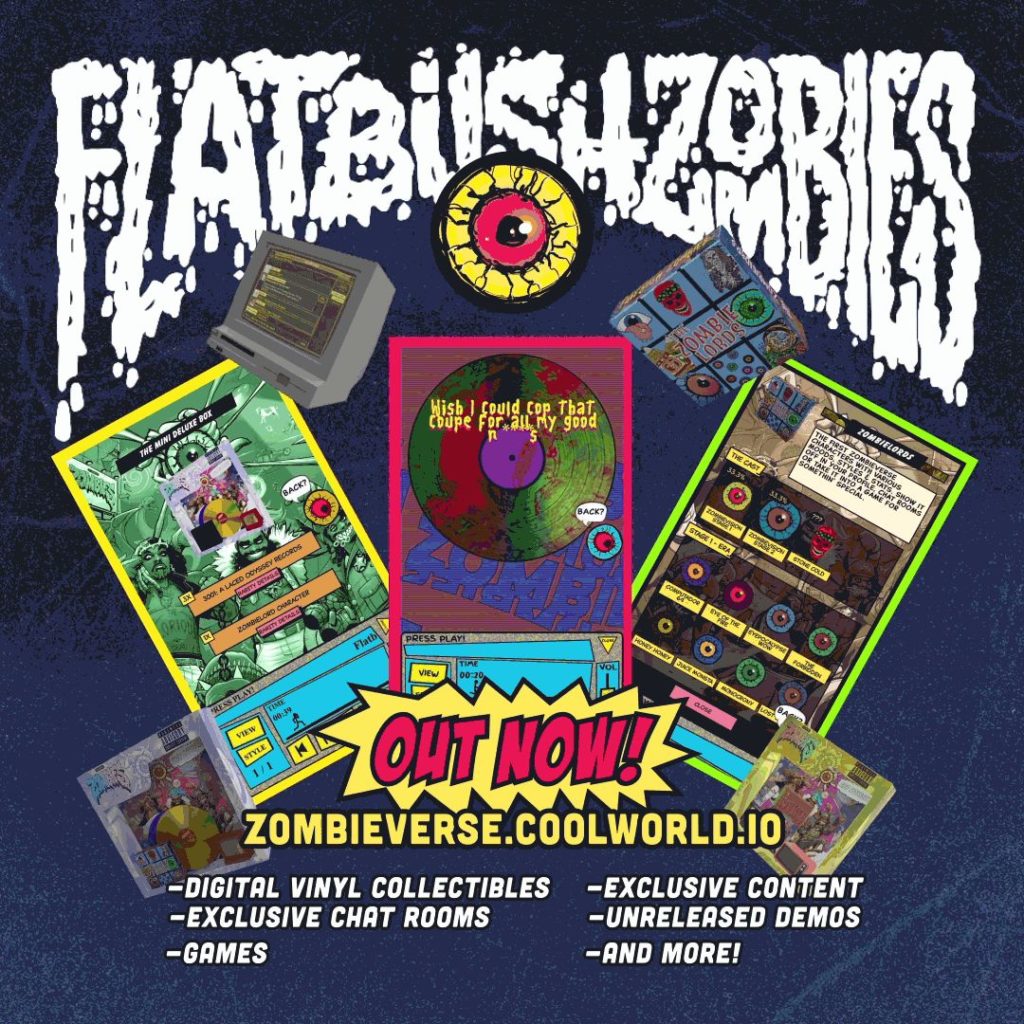 The renowned Brooklyn-based Hip-Hop group, Flatbush Zombies, and blockchain-based music and gaming platform, Cool World are excited to announce a new Web3 collaboration, The Zombieverse which has officially launched today. The Zombieverse is a communal and fan-oriented online platform created and owned by the Flatbush Zombies which offers exclusive access to never-before-heard music, games, and a private forum, The Graveyard where fans can interact directly with the Flatbush Zombies. Other platform features include an online store called the Zomb-E-Mart, one-of-a-kind collectible avatars called ZombieLords that unlock unique features and profile customizations, an Arcade, and much more.

To keep fans engaged, The Zombieverse will also launch with weekly & seasonal content and collectibles, initially including two collectible editions of FBZ’s 2016 project, 3001: A Laced Odyssey playable via the COOL D.I.S.C. audio player which features unique 3D artwork and custom typography designed by Erick The Architect. Finally, for their most engaged fans, the Flatbush Zombies have included a collection of three never-before-heard demos, The DeadDemos, accessible as rewards to those who complete the community-driven season one Quests.

To access The Zombieverse, fans can log into the platform via traditional Web 2.0 logins such as email or social media accounts, or by using their Web 3.0 wallet. Unlike other Web 3.0 ventures, Flatbush Zombies and Cool World worked in tandem to ensure their new platform was just as accessible and easy to use for their long-standing fans as it is for those in the Web 3.0 space. The Zombieverse is free to access and includes numerous affordably priced items which are purchasable via crypto wallet as well as by credit card, including an “Album Box” that includes a copy of FBZ’s album, 3001: A Laced Odyssey, and an avatar, as well as a ”Mini Box” which includes an avatar and 3 songs.

Last week, The Zombieverse was made available for those who pre-ordered a vinyl copy of 3001: A Laced Odyssey and within 24 hours, there were over 1,000 accounts registered on the site. In keeping with the Flatbush Zombies’ interest in environmental conservation, The Zombieverse and Cool Word are built on the Polygon blockchain network, which is considered to be one of the most eco-friendly blockchains with the lowest gas fees. With the official launch of The Zombieverse, the Flatbush Zombies and Cool World invite fans to participate in their first-ever online interactive community.