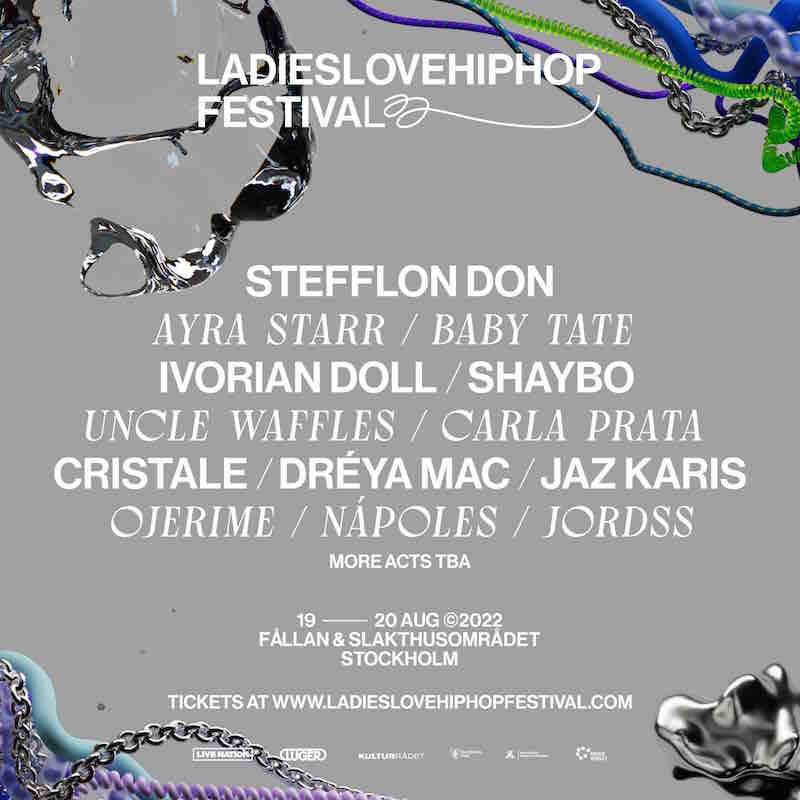 Led by UK rap icon Stefflon Don and Nigerian afropop princess Ayra Starr, some of the world’s best artists and DJs, across hip-hop, R&B, soul, and pan-african music, are set to descend on Stockholm in Sweden this summer for the 2022 Ladieslovehiphop Festival, taking place at Fållan & Slakthusområdet on August 19-20.

Put together by Swedish collective and creative movement Ladieslovehiphop (LLHH), the 2022 Festival is a one-of-a-kind itinerant festival, with the strong purpose and ambition of contributing to a more diversified and equal live music scene across the world, as it has demonstrated by its women-led artist line-up across the two-day festival.

In one of her rare festival performances this year, Ladieslovehiphop Festival is excited to announce none other than Stefflon Don as its first headliner. The MOBO and NME Award winner, Forbes 30 Under 30 musician, and platinum-selling rap artist and songwriter heads to Stockholm on the back of a stellar 2022 that has seen the British Jamaican native release ‘Juice’ and ‘Like That’, collaborate with the likes of Miraa May and Adekunle Gold, and just recently, announce that her long-awaited album will be released this year.

The 2022 Ladieslovehiphop Festival will also see Nigerian pop sensation Ayra Starr performing music from her critically acclaimed ’19 & Dangerous’ debut album and breakthrough self-titled debut EP. Released only last year, both projects have led Ayra Starr to become one of Africa’s fastest-rising new music star, while also being championed by the likes of Pitchfork, Rolling Stone, NME, and British Vogue, among others.

Joining them from Atlanta is multifaceted rising star Baby Tate with her exquisite sound of summery pop, amorous R&B, and hard-hitting hip-hop music, which has birthed viral hits like ‘I Am’ and ‘Eenie Meenie’. She will be performing alongside UK drill phenomenon Ivorian Doll, known for such hits as ‘Rumours’ and ‘Body Bag’; the lyrically dexterous ‘Queen of the South’ herself, Shaybo; and one of alternative R&B’s best kept secrets Ojerime, who comes with co-signs from the likes of Kaytranada and Annie Mac.

Future stars such as UK viral sensation Dreya Mac, who has taken over the world with her hit song ‘Own Brand (Baddie)’; ascending Brixton rap artist Cristale, who is one to watch in the UK Rap and Drill scene; Swedish Grammy (Grammis) nominated genre-bending artist and DJ Nápoles; and British R&B and jazz rising star Jaz Karis, are also among the stellar artists set to perform at the Ladieslovehiphop Festival.

Curated across three different stages, the Ladieslovehiphop Festival will give visitors a rich and expansive experiential weekend, not only courtesy of the amazing line-up of female artists that have been highlighted to perform, but the festival will also offer rich food, exciting art installations and exhibitions, in addition to the much anticipated live performances, with each night culminating in vibrant DJ sets from the likes of South Africa’s Amapiano sensation Uncle Waffles and UK ‘Queen of RnB Edits’ Jordss.

Speaking about the festival, Ladieslovehiphop collective founders Nataša Marijana and Rebecca Tegegne say, “It feels amazing to finally have a proper festival summer after these past two years. We have curated a line-up of artists and DJs that we truly love and believe our community are excited to see perform. We will transform Stockholms’ very own meatpacking district into an indoor and outdoor festival area where our visitors can enjoy concerts during the day and dance all night long to DJ sets. Besides a carefully selected line-up, the festival will offer tasty vegetarian food, art installations and much more”.