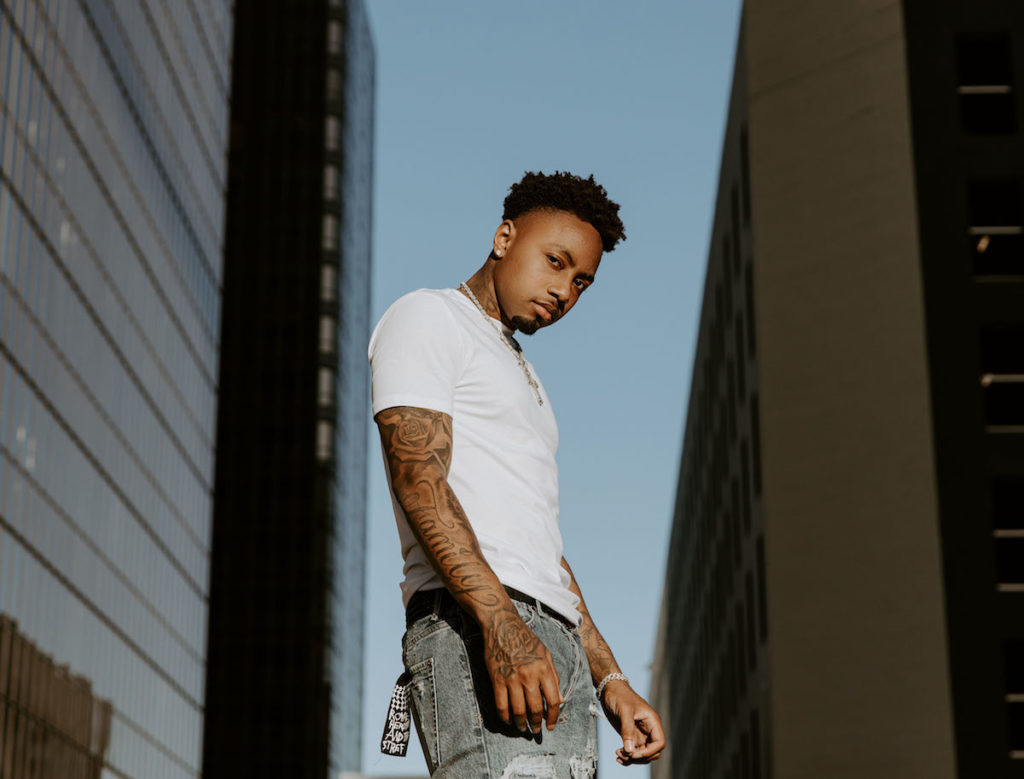 Kyle Banks is one of a kind. A native to the west coast, he only lived on the east side briefly to attend school but soon returned back home to pursue music. Despite being a relatively new artist to the scene, Kyle is in a unique situation. Not only are his managers his best friends, but his producers as well. It normally takes a while to build a good artist/producer relationship, but Kyle has known Meez and Louie Ji for years means they know his sound better than anyone, not to mention they are Grammy nominated as well. It’s safe to say Kyle is on a hot streak Earlier this year, Kyle joined Kalan.frfr on the “TwoFr Tour”, as well as collaborating together on “Poppin” along with dreamville’s Cozz. With all this up his sleeve there’s no doubt Kyle is going to go far. Viper tapped in with Kyle a few weeks back to discuss his new EP “Uncommon”, west coast life, touring, and more. Read what Kyle had to say below!

Where are you calling me from?

Down the street from the studio, Woodland Hills, California, right now.

Have you always been on the West Coast?

Yeah, I’ve been here my whole life. I went to school on the east coast for like a year almost, but I was in like 2014.

Where did you grow up?

Do you feel like you would be making similar music if you had grown up on the East Coast?

Maybe, maybe not. I feel like a lot of my music is from personal situations, situations that I’ve actually seen, and I feel like every coast has different environments.

When you were first starting to write music, what artist were you looking up towards?

It’s funny because before I even started music I was telling my friends I used to like Jaheim, he’s an older R&B guy. The only reason I even liked him is because at first my dad had told me, if you learn his whole album, I’ll get you an Ed Hardy jacket. So I was like, Oh shit, I got to learn it. But as I was learning, I started, to pick up on melodies and different rhyme schemes. So when I started to write music, I would go back and hear his old album. I think it’s called “Ghetto Love”. Listening to his rhyme scheme, his cadence. I tried to put it towards what I was doing. So I listened to him. I listened to a lot of Usher and artists like that. Definitely Chris Brown as well.

So you just dropped this new project, “Uncommon”. What’s uncommon about you?

I felt like my whole life is uncommon, even how I’m even doing music is uncommon. There’s a lot of event and situations that happened that made me. I played basketball my whole life. For me to play basketball 18 years and start doing music when I was like 19. How I even got here is uncommon. I feel like a lot of people that do music now kind of dabbled in music at an early age or maybe they were in a choir. I didn’t do any of that. I literally walked in the room and picked up a mic because my friend was doing it. I coped him, and here I am now.

You know, everybody would say they would go pro but I’m not going to sit here and lie to you. I mean I was good but I’m a realist I wasn’t putting up 50, 60. I wasn’t one of them, but I held my own. So probably not.

Which track did you have the most fun writing?

I want to say “Forever”, because when I first initially heard the beat. It didn’t catch my attention, maybe I wasn’t listening but it didn’t come to me. Then he played again and I was like, why didn’t you play these? He swore up and down that he played it for me. I was like, Man well maybe I got different ears today. So everybody was in the room, it was a vibe. It was like all my friends and it was kind of like a party situation. So it was a good vibe. It was a fun environment.

In contrast, which song was the most challenging to write?

Definitely “Free CC”. Maybe not mentally hard, but it was emotionally hard. You know, that’s my best friend, my brother. He’s going through some crazy stuff right now. I was saying in another interview, regardless of the good that’s happening, it’s still in the back of my mind what he’s going through. So it’s like, I really don’t get too happy because we still got to deal with his situation. But it was emotional writing that because he wasn’t here with us at the time. Very emotional. Even now, he called me about the EP dropping, we talked about it got emotional because he’s not here with me right now. He can’t party with us. So yeah definitely that one.

You just dropped a new music video as well, “For You”. Do you like to have a hand in your music videos creatively, do you like to take part in directing it at all or coming up with the treatment?

Yeah, of course. I mean anything that I’m going to be in and anything that my name is going to be on, I want to make sure it represents me in the right way. Music videos, songs, even interviews. As long as it represents me. Even you, that you your name is a brand. So your brand has to be represented the right way. If it makes sense I’ll go with it, if not we’ll find something to make it make sense. Everything I’m doing, everything I’m in, writing my own work, lyrics, to music videos. I want to be in the loop always.

Who are your main collaborators on “Uncommon”?

I have a really interesting situation. My managers are actually my producer, my main producers, and we’re best friends. We’re with each other all the time, live down the street from each other. It’s very easy for them to make beats because they know me, they know my sound. If we go eat together, I’ll talk about things I heard in my head or on the radio. But you know obviously I work with other producers. For one of the songs, “Folded”, is produced by Skay 808. Crazy producer, he’s from Atlanta. But even him I’ve known him for a minute. I feel like a lot of the producers I work with know my sound, especially my managers. Those are the ones I’ve really been working with for the last four years.

Your last two projects have been kind of short, they’ve been under 10 songs. Do you think you’re going to do like a full length LP soon?

Yeah, the next project will be a full album, probably between 12 to 15 songs. I just felt like right now I want to keep it to the point. Relatively I’m a new artist, so I don’t want to go overboard yet. I’d rather build my anticipation up so by the time the album drop it’s really anticipated, so people want to hear every song. I feel like right now I just want to get the songs out that I feel like are going to attract the most attention.

How was going on tour?

It was very fun, It was a new experience. I was telling some of my friends, it’s cool seeing people actually sing my music in different states, especially cities I’ve never been to. It was real cool and it’s humbling, makes you go harder. People are listening I got to go way harder, next time I want the whole place is singing. It was very fun, a new experience for me, and it put different things in perspective. I came back and I recorded like three or four more songs.

Were you recording music while you were on the road or did you wait until you got back?

Everything is moving so fast, every show we had was a different city. I think the most we stayed in the city was maybe two days, but at the same time I was tired. But when I got back, it was for sure go-time. I was in the studio all week.

Do you think that you’ll do your own headlining tour soon?

Of course, that’s the plan.

If you were to go on tour, are there any artists that you would bring on the road with you?

I’m a fan of music, so anybody I feel like that really wants to perform. Obviously, I have favorites as far as people I’m a fan of that I listen to all the time. As far as doing shows, I feel like “I’m not the biggest name in L.A. right now”, but my man Kalan.frfr, he took the time, allowed me to go on tour with him. For that, I’m very grateful and opened my eyes. If I see someone that’s humble and hungry, I wouldn’t mind, you know?

Do you consider yourself more of an introvert or an extrovert?

Probably an introvert, most of the time I just like to be in my circle. I like being comfortable. As far as doing shows, I’m probably the opposite because I like interacting with the crowd, I like talking to different people, I like hearing how they liked the show and getting advice and stuff like that. So it just depends on the environment.

If you had to wear only one outfit for the rest of your life what would it be?

Some nice pants, probably some sweats if I gotta wear it every day. Comfortable shoes, I got some big boots that I just love. Or some Nike’s, can’t go wrong with Nike’s. Probably a nice shirt, maybe a jersey perhaps, my favorite team is the Rams.

Do you prefer wearing like big name brands, do you like wearing logos? When you wake up in the morning how do you pick what you’re going to wear?

I mean it’s just a vibe. If I’m going out I wouldn’t mind having name brand. I like looking good, feeling good, smelling good, you know, but if I’m chilling like right now, I got some sweats on, some off-whites.

You can expect a lot of music, a lot of great music. Like you said have my own show for sure. Doing more shows and just continuing the blueprint. What I want at the end of day is just doing music. I want my music to be all over the world. So I’m going to do that by dropping great music, dropping great content, and just continue doing what we’ve been doing, and that’s just going hard.