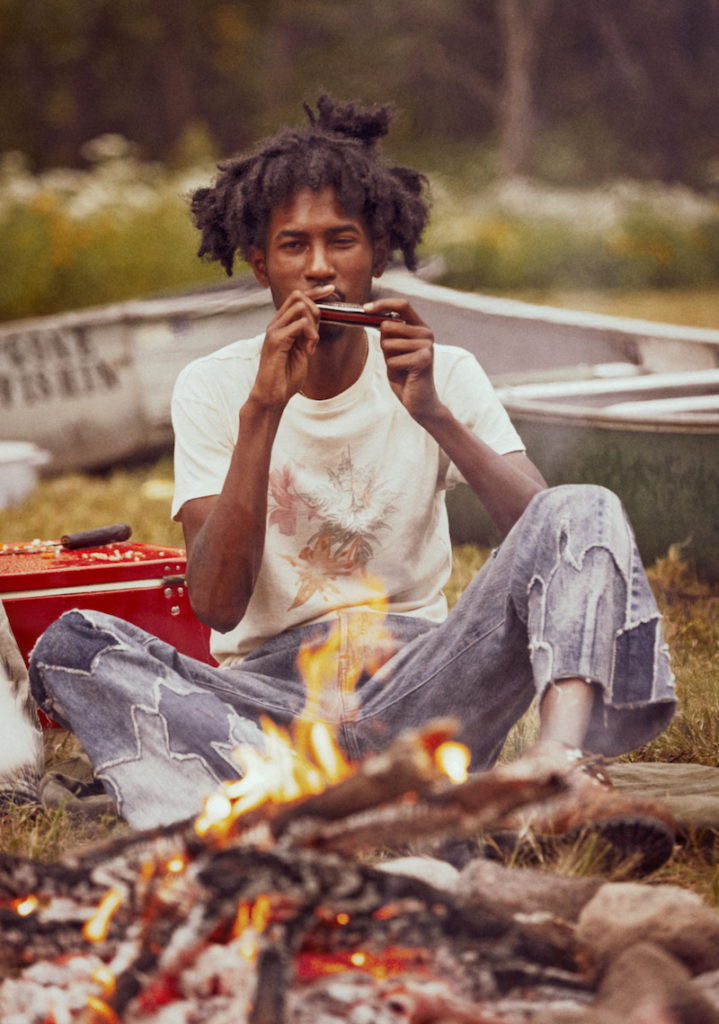 In the late 1960s a movement kicked off on college campuses all across the Midwest. Aware of the growing environmental crisis affecting the planet, and inspired by anti-war protests, students began organizing environmental awareness teach-ins and promoting a more sustainable approach to consumption. It was a movement that laid the groundwork for today’s environmental fight, and gave birth to what we now celebrate as Earth Day. For Spring/Summer 2022, Levi’s  Vintage Clothing is celebrating those student activists with a 1960s-inspired collegiate collection.

Called Project Survival—a name taken from a ’60s student environmental movement at Northwestern University—the collection features a range of casual styles that draw heavily on collegiate staples and archival Levi’s  references. Specifically, the style and aesthetics of the young students and activists of the late ’60s and early ’70s, with a mix of denim, pants, and tops in faded, well-worn colours, and a smattering of stripes, patterns, and graphics. And, perhaps most importantly, it’s a collection that puts the focus on Levis  Vintage Clothing’s longstanding philosophy of creating clothes that are built to last.

Highlights of the collection include a 1966 501  jean that’s been customized into a boot cut flare thanks to fabric inserts on the side seams—a nod to the original form of customization that kicked off the ’60s bell bottom trend. Another staple of the era was the Levi’s  Sta-Prest trouser, and for the first time in years, Levi’s  Vintage Clothing is releasing a true Sta-Prest for this collection. Famously, Sta-Prest is a cotton-polyester blend that was treated to keep from wrinkling, and then cured to create a permanent crease down the center of the leg.

Also featured in the collection is a tab twill chino, which is cut slightly looser from a soft twill fabric and then cuffed at the hem and center creased to give it a more drapey, classic ’70s vibe. As for tops, Project Survival features a range of jackets and sweatshirts, including a 1960s 14-wale cord jacket with snaps, Western pockets, and no waistband that is a reproduction of the old Levi’s  Slim Fits label from the ’60s. There’s also an olive green pullover fisherman’s smock inspired by the popularity of military surplus among students of the era. And to give the jacket a positive and earth-loving spin, graphic flowers were added using a printing technique that makes them look hand-painted.

In terms of stitch-for-stitch archival reproductions, the collection includes an Orange Tab hooded denim jacket with khaki contrast ribbing at the hem and sleeves from the 1970s, as well as a ’70s era striped pocket tee. And to round out the collegiate vibe, there’s also a campus Varsity Sweatshirt in soft cotton featuring hand lettering on the front. And finally, there’s the Pebble Suit, an archival reproduction of a 1960s White Tab 5-pocket jean and matching Type III Trucker that features an all-over pebble print with sun-faded colouring to match the original version located in the Levi’s  archives.

“Levi’s Vintage Clothing is inspired by the current fight for the environment, so we wanted to celebrate one of the early movements in that space. All over university campuses during the ’60s, groups were popping up to promote healthy environmental practices, and we were really inspired by these young students who cared so much about this and tried to make a change. Here we are 50 years later, still fighting for the planet and still trying to get people to listen.”—Paul O’Neill, Design Director for Levi’s Made & Crafted and Levi’s Vintage Clothing at Levi’s Strauss & Co.