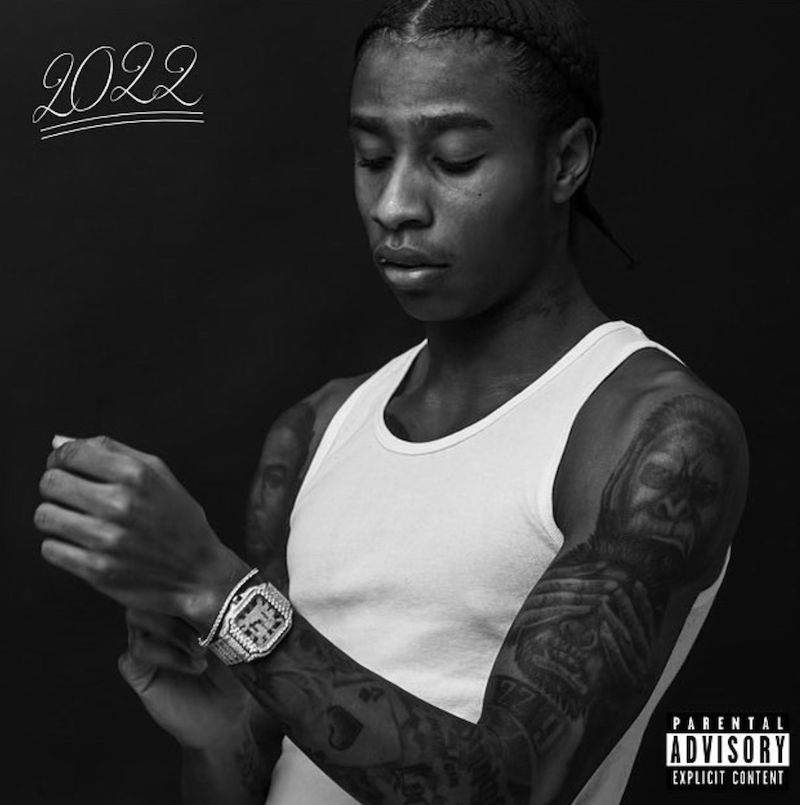 As we come to the end of the first month of 2022, we have rounded up some of the most exciting talent coming out of the UK and US this year. Check out our picks below:

With a co-sign from one of the UK’s finest, when he appeared on Nines’ 2020 album, ‘Crabs In A Bucket’, this guy’s been one to watch for years, so 2022 will undoubtedly be his breakthrough year. Quickly becoming one of the hottest names in the UK street Rap scene, Clavish hails from North London. Once called “Criminally Underrated” by Kenny Allstar, his lyrics display a depth that blends well with his storytelling skills and unique flow. His EP, ’2022’ dropped in late 2021 and boasted catchy songs like ‘Jungle Mood’ and ‘Blue Plate’ on which he detailed his experiences in the prison system.

With the sad news that Kay Flock is facing criminal charges just as his career was on the brink of dominating the NYC Drill scene, thankfully we still have his musical sidekick B-Lovee. With his viral hit ‘My Everything’ making waves, Lovee’s cemented his influence on the new school Rap scene, while pushing the boundaries of Bronx Drill. With three appearances on Kay Flock’s ‘The D.O.A. Tape’, we heard a great deal from him in 2021 but this year we expect to see him level up internationally.

We already told you about her greatness in our Winter issue but here’s another reminder that ShaSimone will be featured heavily in your playlists throughout 2022. She recently linked up with Suspect for a banger, which marks her first release of the year but the East London native made waves with her uncredited appearance on Dave’s 2021 album. Rounding off the year with ‘Hushpuppi’, she’s proven herself as one of the UK’s most voracious lyricists.  -Lily Mercer

This guy caught my attention with a collaboration with 6LACK, but it’s his solo track ‘Racks Out’ that made me an official fan. Aged 22, the rapper hails from South Carolina and displays a Trap heavy, upbeat flair perfect for fans of Playboi Carti and Baby Keem. There’s a versatility to his sound, as heard on ’Selfish’ on which he blends smoother R&B vibes with a more traditional Rap sound. Get the full taste via his 2021 release, ‘Rare Breed’.  -Lily Mercer

If you don’t recognise the name, you’ll definitely recognise his viral hit ‘To The Moon’ if you’ve been anywhere near social media over the last few months! Having witnessed him in action at the Feather Pendants launch party in Autumn, where he shut down his set with a selection of London’s key influencers in attendance, many of whom are already familiar with him due to his successful modelling career. With a glorified hit under his belt, stay tuned to see what Choi does next. -Lily Mercer

One of the best live performers coming out of the UK right now, this rapper displays a versatile edge. His collaboration with Knucks, ‘Call Me Back’ opened him up to fans of the London Rap scene but it was his ‘Black on Black’ EP that established Kam-Bu as one to watch. Having shut down festivals all summer ’21, plus shows for Nike and Marni, we can’t wait to see what he has in store for us over the next few months. -Lily Mercer

Singer/ songwriter Bellah is a 24-year-old who grew up in North London but is now based in Essex. She lit up the UK R&B Scene, breathing new life into a genre that doesn’t get enough accolades or attention and is currently at the forefront of the charge. Last year she dropped the ‘Art of Conversation’ EP and previously ‘In the Meantime’ and ‘Last Train Home’. ‘Art of Conversation’ featured songs like ‘Home’ she is questioning her love interests intentions on the track. ‘If I were U’ takes inspiration more from the early 2000s late 90s with a type of beat that you can rock with. The track was produced by Alexander Lewis, a producer she was worked with many times. Like all her work, the music is relatable and explores relationships that are crucial or were crucial to her British/Nigerian heritage at some point in her life, as well as exploring her aspirations for success in the music industry.This year she has performed her 2021 single ‘Evil Eye’ on Tonight with Target and Enny brought her out at the MOBO’s to to sing the hook on ‘Peng Black Girls’. ‘Evil Eye’ sees Bella’s soulful voice calling out to higher powers to block out the negative energy blurring the lines between her Nigerian heritage and her R&B influences. She also joined Capital XTRA’S Robert Bruce for his Home Grown segment on the radio station. – Tyrese King

It feels that South Londoner, Jords (aka Jordan Edwards-Wilks), is preparing for a big year in 2022. He explores concepts through clever, thought out lyricism with a smooth comfortable delivery. He has released a number of singles this year, including ‘Rudeboy Ting’ and ‘Old School Flex’, which features the OG of UK grime, D Double E, as well as Izzy Bizu, a singer who is best described as pop and R&B combined. He said he: “want people to be able to travel through time whilst listening to this and be able to put themselves right in the middle of a sweaty garage rave.” The rapper has also appeared on Colors, a music platform that promotes unique sounds and emerging artists, twice this year, performing ‘Rice &Ps’ and ‘Enemies/AAA Medley’.You can tell that Jords is really feeling himself performing ‘Enemies/AAA Medley’ as he spits bars in a gruff voice talking about badness, accompanied by a saxophone led instrumental. His freestyle appeared on BBC 3’s brand new show Tonight with Target, while his show at Hoxton Colours sold out earlier in 2021. That gives the impression that he is gearing up to release another project in the near future, and we should all be looking forward to it. – Tyrese King

We were early on Kojey Radical, with him appearing in our 2014 issue, but with his debut album ‘Reason to Smile’ dropping on the 4th March, executive produced by Swindle and Kz, it’s only right we include him. Kojey and Swindle have worked together previously before on Swindle’s latest project ‘The New World’. Kojey’s music is an experience that blurs the lines between the art forms of Jazz, Rap and Poetry. 2021 was supposed to be the year that Kojey Radical blasted himself out of the atmosphere and announced he is here. A complete sold-out UK tour, including The Roundhouse in London had to cancelled because of the pandemic. Promoting the album, he released his HB Freestyle for season three of LinkUpTV’s freestyle platform. He also dropped two new singles ‘Gangster’ and ‘War Outside’. ‘Gangster’ is a love letter to the musicians’ mother and an introspective look into his own relationship with the mother of his son. While the message of the song is a sobering one, the tempo is upbeat and enthusiastic. Kojey Radical extends beyond so many styles and genres that his music will always be exciting, and there is no sign we are going to be let down when the album drops. – Tyrese King

Lilah dropped her first ever EP, ‘Atlantis’ towards the end of the year. She submerges the scene with her distinct soulful voice and unique beats that fit neatly with the themes of water on the record. It’s a seven track project which includes the single ‘Summer Night Fling’, inspired by the Shakespearean play Twelfth Night. The EP serves as a reminder that it is okay not to be okay, and there is no rush to figure everything out immediately. That allows us to see her vulnerable side, and in that vulnerability, we witness something beautiful. It is almost therapeutic as we see her inner conflict and gradual transition to self-acceptance from discovery. Only just getting started, it will be interesting to see how far the East London songstress can continue to grow and progress in her career. – Tyrese King

One an artist possesses not only an ability for lyricism and wordplay, but also an ear for production, you know they are a prodigious talent. Proph has all of these attributes, as can be seen on two of his releases last year, ‘Roadside’, and ‘L4V’. The South London man also delivered an outstanding performance on GRM Daily’s ‘OneMicFreestyle’ series. If Proph is able to put out a longer release this year, it should only be a matter of time before he finds major success. – Joe Simpson

Jordy enjoyed his best year to date in 2021, and looks set to go from strength to strength in the months ahead. Following on from 2019’s ‘HAVE A GOOD SUMMER’, the Essex rapper dropped ‘SMH’ in June, his longest project to date. Jordy has shown to be no stranger to experimentation, incorporating different genres and melodies into his music, while still being a master of flows and punchlines. Furthermore, the rapper has also had success with the rap collective, Vibbar, and had a huge part to play in one of the most infectious tracks of last summer in ‘Come My Way’. If Jordy is able to build upon last year’s release, he could create one of the most exciting releases to come out of the UK this year. – Joe Simpson

In many ways, Joe James already has been a one to watch this year, having already dropped two exceptional mixtapes. A long term collaborator with mellow-grime master, Kwollem, Joe James has found a niche with his own sound, combining gritty lyrics and flows with jazz infused instrumentals. His latest release, ‘Pure Connery’, uses luxurious instrumentation that give off the glitz of the early James Bond films, while James slides effortlessly in and out of beat pockets. While we’re certainly not expecting the rapper to continue dropping with such regularity, if he continues to create music at this level, people will have to stand up and take notice. – Joe Simpson

Dexter has one of the most unique sounds coming out of the UK right now. She combines straight to the point, thoughtful lyricism with dream like, guitar led backing to create a transformative soundscape for the listener. Still just a teenager, Dexter has managed to gain over a million streams on her single ‘Blue Skies’, while one of her latest offerings, ‘Paper Cup’, shows the experimentation in sound that could propel her to stardom this year. – Joe Simpson