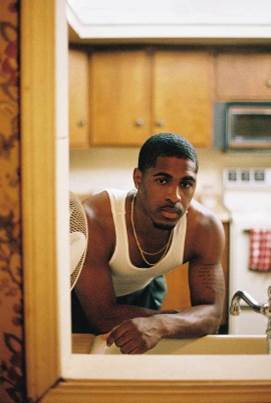 Boston native Khamari is set to have a big 2022. With a style that has drawn comparisons to the likes of Frank Ocean and Kid Cudi, the artist has a distinct, rich sounds which sits in the world of R&B. His previous projects include his 2019 EP, ‘Eldorado’, whilst his most recent single ‘Doctor, My Eyes’ dropped earlier this month. We caught up with him to discuss his favourite mixtape…

What’s your favorite mixtape ever?

I would say ‘Bastard’ – Tyler, The Creator.

Conceptually it takes me back to when I was in high school and trying to find my way, feeling misunderstood and misguided. It always presses that button, and I always thought him using Dr. TC as his high school guidance counsellor was really creative. I think even though we’re different types of artists, Tyler definitely inspired me to create. His attitude, relentlessness, and adventurousness, changed my idea of the possibilities in terms of what type of artist I could be.

Around the time I first heard ‘Bastard’, I also found out that Tyler was producing his own songs, so I guess you could say it introduced me to Tyler, The Creator, the producer. He and J. Cole definitely left a mark on me in terms of artists that produce their own music. I love being collaborative for sure, but being really hands-on with the production and sonics of your own project was something artists like them made me really motivated to do.

Driving home from school in my 2009 Volkswagen Jetta.

I didn’t get put onto this until at least a few years after it came out, to be honest. One of my first thoughts after I heard it was, ‘I wish I’d discovered this when I was younger’. But it came into my life at the time I was first starting to listen to more music that wasn’t classical music. It really opened my eyes to how different songwriting and production could be from the music I was listening to then.

The cover always gave me both a really nostalgic and eerie feeling.

Priceless, you couldn’t get me to name a price.

I don’t own physical copies of any album, but if I did I would definitely own this one.