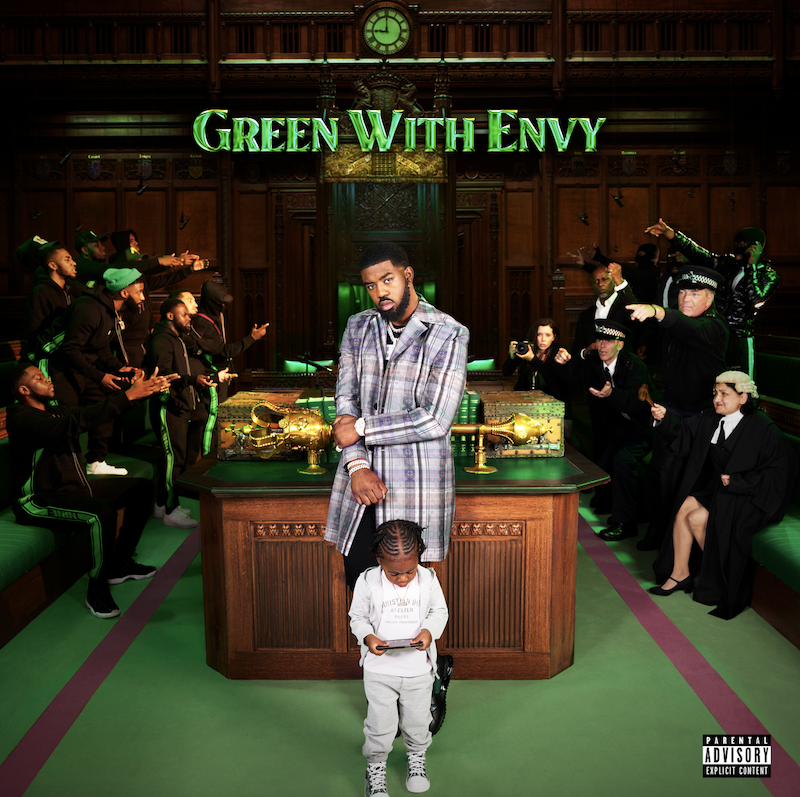 900m streams. A Brixton Academy headline show which sold out in mere minutes. Multiple UK Top 10 Singles, including his OCC No.1 Single with Russ Millions ‘Body’; which became the first Drill song to ever reach the top of the charts. The list of accolades and milestones that UK rap behemoth Tion Wayne has achieved in the last few years is undeniable. Now, one of Britain’s biggest rap stars is set to cross another major career benchmark with the announcement of his debut album ‘Green With Envy’, set for release this September 17th on Atlantic Records and available to pre-order now.

The album announcement comes fresh off of Tion’s recent release ‘Wow’ as well as his truly global smash single ‘Body’ in March of this year. The Radio 1 A-listed track not only became the fastest video to hit over 10m views on GRM Daily, but also became the first UK Rap Number 1 since Stormzy’s massive ‘Own It’ featuring Ed Sheeran & Burna Boy. Not just content to dominate the airwaves in his home territory, Body also went on to reach No.1 in both Ireland and Australia, where it had the honour of becoming the first British rap track to top the latter’s singles charts, forever redefining the reach and global appeal of UK hip-hop and setting a new momentum for rap culture.

A titan of UK rap since the release of his debut mixtape ‘Wayne’s World’ in 2014, Tion has consistently delivered some of the biggest rap hits Britain has to offer, racking up multiple silver, gold, and platinum records in the process. Now, fresh off the back of his latest collaboration with Central Cee and Ed Sheeran on the ‘Bad Habits’ remix, the 27-year-old artist is set for global domination with the announcement of his debut album. Featuring collaborations from a who’s who of British stars such as Arrdee, D-Block Europe, Potter Payper, Afro B, Darkoo and NSG, not to mention the likes of 6LACK, Polo G, Fivio Foreign & Davido, ‘Green With Envy’ is set to become one of the biggest rap albums of the year and a trust testament to the work ethic and drive of an artist with few peers.

Alongside the album announcement, Tion announces a new collaboration with leading independent UK street fashion brand Benjart. The collaboration sees the joining together of two major players within British culture to create a limited-edition collection to run alongside his album.  The designs curated by Benjart consist of 3 pieces all heavily centred around the LP’s title ‘Green with Envy’.

The Money T-shirt plays on the complicated relationship with money as both artist and brand rise up their ranks (this is illustrated using a green 50 pound note which is visibly torn to symbolise the love/ hate people have with both artist and brand growth). The Cry t-shirt is reflective of envy whilst the graffiti t-shirt symbolises the going against the grain mentality synonymous with the album artwork.