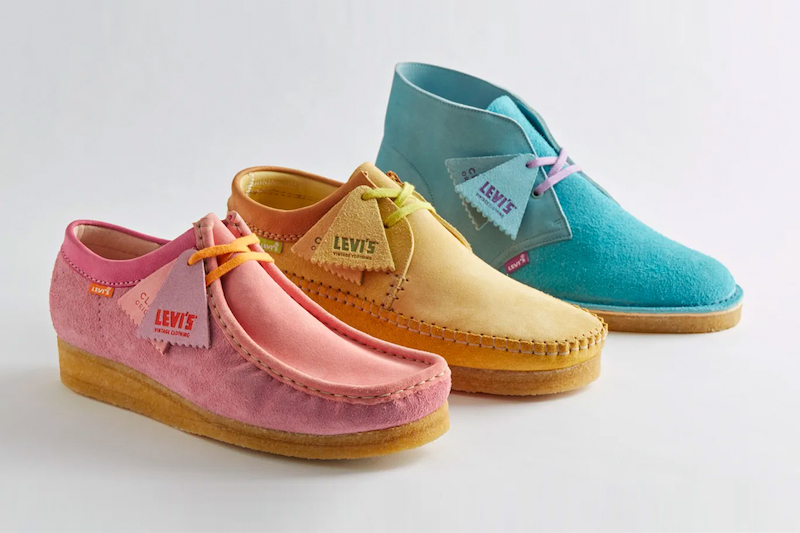 The link up we’ve been dreaming of, with dreamy pastels to last all Summer…

We’ve got a real bad thing for Clarks shoes! While we’re mostly attracted to their aesthetic and vibe, we also love the role they’ve played in iconic musical scenes. Firstly, there’s the Wu-Tang Clan affiliation, with the beloved rap crew creating life-long trends with their dyed Wallabes. Secondly, but equally important, is the Reggae scene’s adoration for the British heritage brand, most notably celebrated with Vybz Kartel’s classic anthem, ‘Clarks’, which for many was the introduction to Popcaan.

Both of the above demonstrate just how cherished Clarks Originals are to various music scenes. While in the UK in the eighties, the shoes played a priceless role setting the style for Manchester’s rave scene. Coined by Factory Records’ Tony Wilson, the term “Madchester” was used to describe the indie-rave scene which merged elements of Acid House, Rave music, Psychedelia and 1960’s Pop. Iconic nightclub, the Haçienda, was the setting with bands like the Happy Mondays and The Stone Roses providing the soundtrack.

For their Spring/Summer 2021 collection, Clarks have teamed up with Levi’s Vintage Clothing, famed for putting a fresh spin on classic denim pieces. Titled “Loose Fix,” the line takes inspiration from the Madchester scene, with three iconic Clarks styles in dreamy pastel colour ways. Pink suede for the Wallabee, with a mauve nubuck trim and laces. Baby blue suede for the Desert Boot, with lavender laces and last but not least, yellow suede for the Weaver, complete with nubuck detailing.

“When we were putting together the ‘Loose Fix’ collection, we thought it would be amazing to collaborate with Clarks to coincide with it. They were really big in Manchester in the ‘80s and throughout the UK,” said Paul O’Neill, the head Designer, for Levi’s Vintage Clothing. “I’ve probably been wearing them myself for the last 30 years. It’s just a really old school approach to making shoes that are timeless, shoes people will always love. These are all traditional Clarks shoes with a contemporary approach to colour.”

Get your hands on these from June 11th via select retail stores, plus online at Levi’s and on its app.