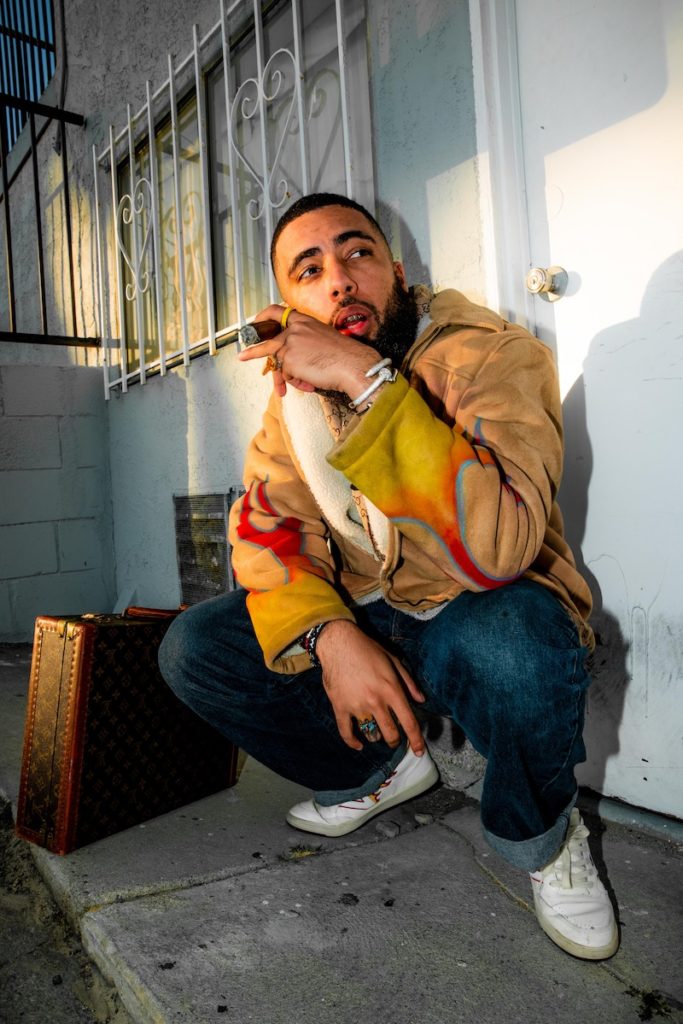 As soon as your hear the tag “Good work Charlie” you know you’re about to hear some heat. Over the past few years, Charlie Heat has produced and played a part in countless hit records for some major artists including Kanye West, Lil Uzi Vert, Madonna, Travis Scott, Denzel Curry and Shelley FKA Dram. On top of producing for other people, he also has a very impressive solo discography. In 2019 Charlie dropped his first album ‘FIREWORKS’, primarily a Hip Hop driven project, accompanied by featured acts like Lil Baby, G Herbo, Denzel Curry and Cyhi The Prynce.

Now Charlie Heat is back with a brand new album, ‘Valentine’s Son’. In contrast to his previous projects, this album is highly R&B based, a direction he had been planning to move in for a while. On ‘Valentine’s Son’, he appears to have assembled the Avengers, from tracks like ‘LADYLIKE’ with Grammy-winner Ant Clemons. Or ‘ANGRY HEARTS’ with Malaysian RnB singer Yuna and ‘IOU’ with Sevyn Streeter. If you’re a fan of good R&B then you will definitely love this album. VIPER sat down with Charlie Heat virtually to discuss his new album, transitioning from Hip Hop to R&B, Kenny Beats and more.

Congrats on the release of ‘Valentine’s Son’. What was the process like making this album?

It was pretty easy actually, surprisingly so. I released the album in 2018, ‘Fireworks’ and I feel like that album really taught me how to make an album. It was really hard, really long, really strenuous, a lot of wasted time. This time around I felt like a sniper. Just head shots on ideas, shit like that and everybody I was working with was in the same boat as me. Everybody’s super experienced on this album. Sevyn’s a vet, Yuma’s a vet. It wasn’t that hard and it was a really good time and it came together pretty fast. It was good man.

Why did you choose the name ‘Valentine’s Son’?

A couple of reasons, the biggest thing, it’s an ode to my mom. I feel like with me personally, that’s a side I never really get to show. The emotional, like who I really am. The records people know me for are pretty loud so this is like a different side to my creativity and I feel like that encapsulated it perfectly.

What song means the most to you on the album?

Oh definitely the Intro, because it’s about my mom.

Do you have a good relationship with your mother?

Yeah, it wasn’t always easy. We had our ups and downs you know, but we got through.

I work with a lot of artists, and other artists I work with I have really good relationships with. Like FIFTEENAFTER, he’s one of the artists that just signed to me, he’s on the last track ‘OOMMWW’. We’ve got hundreds of records together, so it’s just like sifting through records. Figuring out which ones to use, stuff like that.

So a lot of the process was just selecting which songs you wanted to use?

Yeah a lot of selecting, then once we had the foundation, going back in. Once I came up with the name, we linked with Germaine, who I’ve got a lot of records with coming up. I was like, “yo bruh I need to pull you in on the intro for this tribute to my mom.” He was like, “shit, let’s get it.”

Is there a song on the album that you had the most fun making?

‘IOU’ was fire because when we first did it, we got the guitar solo and I really produced it out. There were a lot of people in the studio in Philly, that’s when I was still in Philly a lot. We had the Henny out, I feel like you can really hear the vibe, so that was probably my favourite session.

For this album, there are a lot of tracks that use guitar. Is that you playing on there or do you have musicians come in?

Yeah, musicians. The main one is this dude on the team, Matt Bushka, he played a lot on the last album too. On ‘Lady Like’ is my boy Jack Roe. He’s fire, we did ‘Out Of The Ordinary’ together for Jacquees.

In the past you’re primarily known for these booming Hip Hop/Trap beats, but this album is way more R&B focused, way more relaxed. Why did you choose to change up your style for this one?

I’ve been kind of planning on it for a while, probably right after the last album. To be honest, a lot of women were like, “I like the album but I only like one song” and it was the R&B song. I had a conversation with my dad, he was saying that was the one song on the album that really took you on an easy journey. I like that vibe a lot, I like Sade a lot, Stevie Wonder, Carlos Santana. That’s kind of what I wanted to provide to people that like my music already.

This transition going from Rap to R&B, is there a headspace or energy you put yourself in when you’re creating these different vibes?

Not anything abnormal. Probably until the beginning of 2019, the turn up was way more natural for me, it’s kind of where I started it. But I started trying to get better and create music that sounds like other music I like. I had to do it better, so now It’s probably even, it’s like whatever I feel like doing. I don’t even have to be in the greatest mood or bad mood to do it. It’s like ‘yo, I feel like making some cool shit today’, or ‘I feel like playing some chords today’.

When you first started producing, were there any specific producers that you looked up to?

In the very, very beginning it was definitely Swizz Beats and Jahlil Beats for sure, I was trying to make beats that sounded like them. Jahlil Beats was from down the street, he’s from Chester, PA and South Jersey. I saw him and Meek come up, that was like my high school years. My dad too, it was like more than just music with him, so it’s kind of hard to count him. Of course ‘Ye and Pharrell.

What was the first real placement you got?

Lacrae, it was before he blew all the way up, on a small EP.

If you could do an EP or collab album with any singer or rapper, who would it be?

Jay Z, ain’t even a thought.

How about how about singers? I feel like you and Ant Clemons could really make a crazy project.

Absolutely, I feel like that’s not far off. Hopefully when he gets back from touring we can do that. He’s put out a lot of music, he’s going crazy! Shout out to him, he from Jersey, too. We would snap, I would like to do something a little different.

What has been inspiring you lately?

It’s a cliche answer but everything inspires me. I’ll say of late, i’ve always been a movie buff. Since we can’t go outside I literally been relying on movies; old movies, new movies. I probably watched a nice rotation of Scarface, Godfather 1 and 2, The Counselor, Django, Belly, Paid In Full. I probably watched each of those twice a week in the studio while creating. Then I throw a little Chappelle’s Show in there or something to lighten it up; The Office.

What are your thoughts on the way the industry has been changing over the years from the way people deliver their albums, the promotion, how everyone has been doing deluxe albums, the rise of Tik Tok and how easy that’s made it for up and coming artists to blow up?

It’s a yin and yang for me. The good or pure side of it is that talent gets recognised, a good moment will get recognised, which is dope. Like if your shit is hot, it ain’t gonna slip through the cracks if you put any type of effort behind it. Soulja Boy got a song going on right now, he’s back. He already tripled his feature price off a Tik Tok promo campaign. The other side of it too is, it definitely takes away from the things that grow on you. There’s no growing on you anymore, there’s no grow on you albums, think about it. I love Kendrick to death, think about ‘To Pimp A Butterfly’ in this generation, to a demographic of kids. They don’t even have the patience to be like, what is this? Like as soon as it doesn’t sound familiar, it’s getting skipped, and that ain’t good. That’s how you end up like Disco where everything sounds the same.

Who are some other producers and artists that you are fucking with right now?

I really like my boy Kyle Banks, he going crazy, Monte Booker, he’s nuts! Of course I like Pierre Bourne, Wheezy. Everybody that got they own sound, man. I love that. That’s my favourite, what I chase after. The producers I work with and the people on my team they all got their own sound. Mike Zombie, that’s my dog, he’s got his own sound.

I really liked your rework of ‘Take It Back’ with Denzel Curry and Kenny Beats.

Shout out Kenny Beats and Denzel for letting me do that! Kenny’s going fucking crazy, he’s got it figured out, I love it. I feel like, he’s the perfect example of timing meets preparation. He was very prepared for this moment, he’s ready for this.

What is one of your favorite songs that you’ve produced recently?

Production-wise I’ll probably say, ‘Never look Down’ or ‘Fireworks’. I feel like that shit is a work of art, it’s got Freeway and Cyhi The Prynce on there. The amount of versions of that song there is and it came out the best version; that’s a rare thing. Work on a song so many times, usually you end up going back a third version of the song. I always like the stuff I do with Denzel a lot, I feel like we’re a perfect match energy wise. We ain’t miss yet!

Are there any projects that you’re working on right now that you can talk about? Anything you got coming up in 2021 that you’re excited about?

A lot of stuff, man. I’m definitely doing a collab project with Germaine, I’m definitely doing a collab project with Nyck Caution; that’s an exclusive. We’re really excited about that. We got some shit. Of course me and Denzel always working, me and Yuna always working. My team you know, FIFTEENAFTER, my artist he probably got three projects done. I got like two more albums lined up.