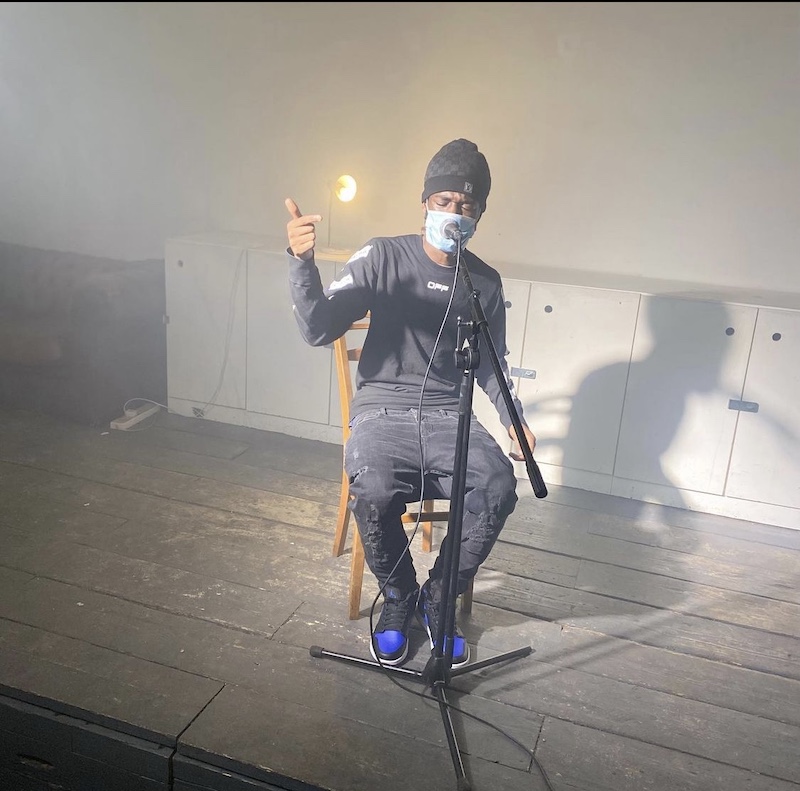 With his new single ‘Snakes & Fakes’ out today, we spoke to Fizzler, one of the buzzing names in UK Drill, about his journey so far and the future of the genre. Stay tuned for more new music from him this year, including a collab with a US artist…

You’ve got a real flair when it comes to making Drill music, you call it “Saucy Drill.” Why do you call your genre that and how would you define the sound?

I call it “Saucy Drill” ‘cause normally when you think about Drill, you know what’s coming – the violence and everything. So the reason I call it “Saucy Drill” is ‘cause I have fun with it, like I’m still doing what I’m doing but I’m giving you the other side to it, not just the bad stuff. It’s a normal teenage lifestyle, mostly us teenagers are just having fun. Obviously you can get into some problems but it’s mostly fun so that’s why I call it that.

With Drill there’s a lack of freedom of speech, with rappers getting injunctions, etc. Do you have to think about the consequences of what you’re saying when you’re writing stuff?

Not necessarily. You see the way I write, most of what I’m trying to say is hidden in wordplay, punchlines, riddles and metaphors anyway. So I ain’t really got that problem, I just hide it and say it in a smarter way so if you’re gonna hear it, you have to look for it.

Does it ever make you feel a way that there’s punishment that comes with writing lyrics for Drill artists?

A lot of the mandem and people I work with or even chill with, they’ve got the bans on them. It’s harder for them, they can’t use certain words to rhyme so it’s just longer when they’re writing.

Tell me about your writing style, you’re sick with wordplay.

I just try and link things you see everyday or people that we listen to everyday and link them into things I do everyday. So it’s mainly me mixing my life experience with other things that are happening out there right now and see if I can link them and put it in there as a bar. That’s how I do it. I like to try new things.

One of my favourite songs of yours is ‘Phone Call’ where you go back to back with TeeZandos. Did you write that together?

Yeah we were in the studio together and she put down the first eight and Scratch the engineer was like, you might as well go back to back. so I did my eight and we went back and forth from there. The tune’s hard, I like it.

You’ve had a lot of buzz over the past year, with ‘Brownies’ making an impact too. You’ve been rapping a while so how did it feel seeing your fanbase build?

It feels good, people are starting to deep the work I’m putting in and deep my sound innit. That’s a good feeling ‘cause people are feeling me.

You’ve got a lot of fans in the scene too, have you ever seen that a specific person in the industry shouted you out and felt like you’ve made it?

Which freestyle of yours is the one that stands out to you personally?

I’d say my ‘Who Got Bars’ with Prod. by Walk, that was my first freestyle still. That’s my statement, that’s what I want people to remember and notice.

People are definitely noticing you! In terms of producers and artists, who do you really wanna link with this year?

That’s a tough question ‘cause I don’t really branch out but if I was to say a producer, Jae 5’s hard. 169 too, he did a lot of work with Santan [Dave] back in the day. Distortion as well, I think I should get in the booth with him. iLL BLU as well, I’d like to work with them. Artist wise, there’s a few names, Headie’s one, then defo Abra [Cadabra] ‘cause he’s on the same thing I’m on, that wavy kinda Drill vibe. Even Central Cee, I like the way he’s coming through. He don’t speak the normal Drill stuff on beats, he says some sensible things; man likes the way he works. There’s another couple people close to me that I chill with as well, I’d get in the booth with some of the Brixton lot. M24 as well and even Tookie, you heard about Tookie? He’s in M24’s click as well.

I like Stickz too from M24’s click, he’s sick and I think you’d sound good on a song with him.

Drill’s got a lot more melody now thanks to artists like you and Abra. What do you think’s gonna happen with Drill this year?

People are tryna take Drill to a new level now ‘cause Drill’s just looked at negatively so people are tryna change the way people see it. I feel like Drill this year’s gonna be more about the instrumentals instead of what people are saying. This year it’s gonna be a top genre, trust me.

I saw you like FBG Duck and a lot of Chicago Drill, but that scene doesn’t sound like our scene. What do you think UK Drill and Chicago Drill have in common?

It’s just the beats that we jump on that sound the same, but the way they deliver to us is way different. The Americans they’re trying to be lit, they’re just tryna have bare fun so they deliver that, they just wanna dance around, that’s what I see. Then here it’s a bit more gritty.

G Herbo’s on of my favourites and he came from the Chicago Drill scene then evolved into a strong Hip Hop artist, is that the career path you’d like to follow?

When I get to a certain point and I can branch out, I’m gonna branch out. I feel like you can’t just make Drill for your whole life, you’ve gotta get more mature with it.

‘Aha Mhmm’ got half a million views in a week, were you expecting that?

Not really, it’s a good song so if it’s promoted right, it should do well but I didn’t think it would do this well. It’s doing alright still!

You’ve got all these bangers to hype up a party, how do you feel about the clubs being closed due to lockdown?

‘Wet It SZN’ dropped two years ago, what’s the biggest difference between that and this new project?

You’ll just feel like you’re listening to a whole other person because even with my beat choices, they’ve become more melodic. ‘Wet It SZN’ was drippy Drill, mainly Drill. This is more melodic, you’re gonna hear one, two vocals here and there, so it’s not gonna be strictly Drill raps, I mix it in a bit.

Are you experimenting with singing?

You adapted your name a bit, before you were Fizz Wet It, but you can’t really take that name to the charts can you?

[Laughs] I feel you still.

What’s the background of your name and how did you feel changing it? Did fans get confused?

I got Fizz from my friends that I chill with… I’m quick to react so that’s why I got the name Fizz. I went with that but it’s always been Fizzler, so it’s just people getting used to Fizz, or Fizzler. It’s been alright.

Have you found your fanbase has increased since then?

Yeah it was easier for people to say too, instead of the whole Fizz Wet It.

How do you feel about your fanbase, are you surprised about how wide-ranging it is?

It’s a mix of people. I get messages from people from everywhere, people I wouldn’t expect to be listening, in countries I didn’t think would be listening. I think Drill gives you a certain energy, everyone wants that energy or thrill so anyone can listen to Drill.

What’s the most surprising country that someone’s messaged you from?

Would you tap in with any of the US Drill artists?

Yeah the way they deliver, I like the way they do their hooks, they’re mad catchy. So when I get to a certain point, I’ll definitely reach out to an artist over there and do something with them.

They’re using all the UK producers for the beats so it’s about time there’s UK artists on the tracks too.

Speaking of that, I’ve actually done a collab with an American artist already but that’s coming out this year.

Am I allowed to know who?

[Laughs] Just wait for that one trust me.

Wow, what a cliff hanger! You’re just gonna leave me hanging… Well I respect the privacy.

[Laughs] Nah when you see it, it’ll be good still! It’s a good one literally.