[FEATURE] 6 OF THE BEST MOMENTS ON LD’S ‘WHO’S WATCHING?’ ALBUM 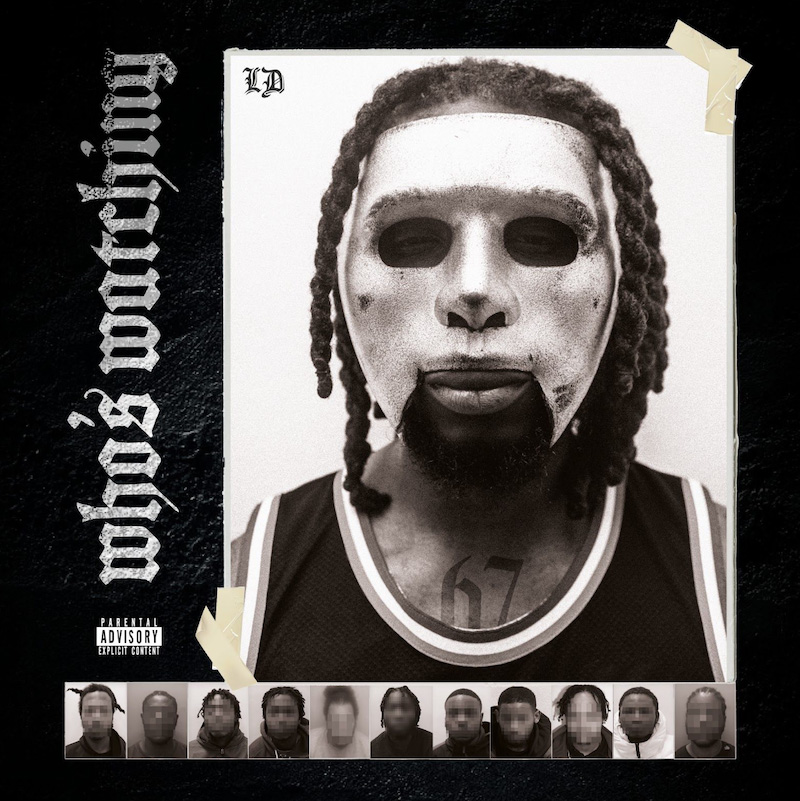 Over the last few years, UK Drill has risen to astronomical heights. The sound quickly diffused from Brixton to other areas of the country, where rappers shared a similar narrative to the one accented by 67; the group that unquestionably pioneered the genre’s beginnings.

LD, the collective’s masked supervillain, has supported Skepta, collaborated with Dizzee Rascal and been the source of interest for everyone from BBC’s Newsnight Team to the infamous interviewer DJ Vlad.

Despite this attention, LD’s career has been consistently interrupted by stints in jail for charges he continues to deny. Over several mixtapes alongside 67, the wordsmith has spoken of his previous run-ins on the streets, but always affirmed that his life has moved on and music is his sentience.

Thanks to Pop Smoke and his Brooklyn counterparts, Drill has maintained its menacing endeavours but become the glamorous genre it is today: Digga D, Unknown T and Headie One are just a few British names that have adopted Drill’s new, commercial contingencies. However, on Who’s Watching?, LD reminds everyone of the sound’s essence, loading 13 tracks with harrowing 808s, rampant rhythms and conscious lyricism that perpetuates his recent battles with the Police.

On ‘The Masked One’, LD and K-Trap demonstrate the madness that happens when they collaborate. Thanks to the Spanish tones of Rue Melo, ‘Fell in Love’ is one of the tape’s most contagious cuts. Drill’s godfather slays his verse, whilst K-Trap naturally bodies his feature too.

Supplying beats for Drill artists across the globe, namely ONEFOUR, BKAY has become one of the scene’s most in demand producer. On ‘Labour’, a sonorous, guitar-led melody glides over the beatsmith’s inherent rumbling 808s. As well as collaborating with Carns and M1, its nice to see LD making room for the genre’s rising stars.

‘Drillaman’ reminds us that LD remains one of Drill’s best lyricists.

Constructed as one whole verse, Drillaman proves LD doesn’t need catchy hooks to entice a listener. The monologue sees 67’s founder firing football and gaming metaphors over Mazza’s production, alerting everyone that he is still one of the game’s most profound figures.

There’s plenty of appreciation for the scene that made him.

References to DigDat, Headie One and production from BKAY demonstrates that LD has been keeping his ear to the ground whilst in prison. Headie is far from a newcomer, but the success of his debut album ‘Edna’ propelled him into the mainstream last year. Meanwhile DigDat continues to make a name for himself lyrically. Like we mentioned earlier, BKAY is only getting bigger, and his polished Drill-strumental is a welcomed one on the tape.

Melting the classic hi-hat triplets of MK The Plug with Flyo’s utopian chord progressions, ‘Out on Bail’ is a highlight on the tracklist, for this surprising production link up. Flyo is best known for his work with Suspect OTB, but LD hopped on his EP last year with RV and Youngs Teflon. One half of the Brigade, when talking about Drill, MK needs very little introduction. The combination accommodates LD’s gravelly tones effortlessly.

‘Who’s Watching?’ is Drill in its purest form.

In a forthcoming interview, with VIPER LD spoke fondly of broadening his sonic repertoire. He’s already explored essences of afrobeats and Hip Hop, but Drill fans will be happy to know that nearly all 11 songs on this mixtape are exclusively of the genre. ‘Rich Porter’ and ’99 Problems’ have more of a road rap vibe to them, whilst ‘This Side’ is a club hit in the making. Overall though, this is a project exclusively for Drill heads.