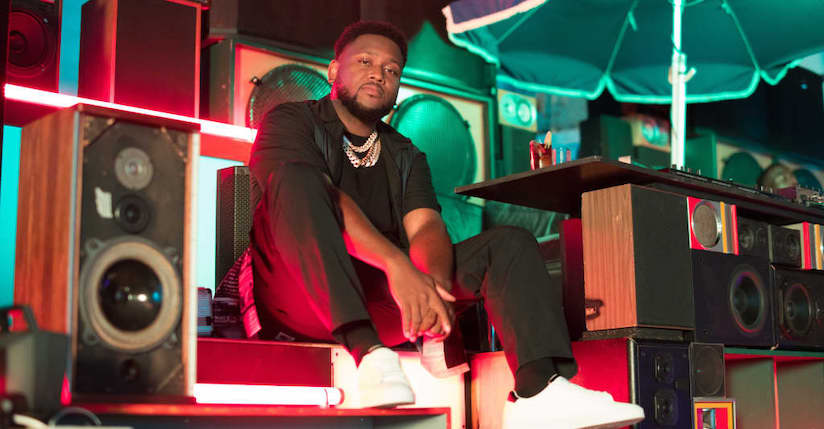 Fresh off a huge 2020 production run, Boi-1DA is back with a brand new smash hit!

The Toronto producer is credited for more than half of 2020’s top 10 hits. From Jack Harlow’s ‘Tyler Herro’, to Ella Mai’s ‘Not Another Love Song’ or Chloe x Halle’s ‘ROYL’, Boi-1DA has proven that not only is he incredibly versatile but also super consistent when it comes to high quality instrumentals.

Today, Boi-1DA gifts us with a brand new track ‘Conga’, featuring rapper Meek Mill and singer/songwriter Leslie Grace. The beat might sound familiar – a refix of the famous Conga by Gloria Estefan and Miami Sound Machine, but 1DA, Meek and Leslie have given it a refreshing twist.

Life in Canada right now is very cold! Unfortunately, a lot of cases have been going up, so we’re on a state of emergency-type lockdown. It’s been pretty quiet up here and we’re all trying to make the best of it.

Do you feel like COVID-19 has affected your workflow?

Covid hasn’t really affected my workflow. I’ve been able to do a lot of work over the Internet. As for like, being in person with artists and being in the studio, it definitely affected that side of it. Just missing the aspect of being around people and being creative with others, it’s been on a slight hold.

About five years ago, I saw you play a set at Mad Decent Block Party in Brooklyn. You brought out Drake and the entire stadium erupted. I remember seeing people way back in the seats hopping over fences and running past security just to get to a good view it was crazy!

That was insane, that was probably one of the funnest times I’ve ever had DJing. And it was just cool because I didn’t put it on the bill or anything, it was really just a surprise for the people that attended the show that I wanted to do because he was in town as well. Everybody really enjoyed themselves and liked that moment.

Do you think you’ll be doing any virtual concerts or virtual DJ sets during this time? You’ve been very active on Clubhouse.

You have this new single called ‘Conga’ that you produced. It’s with Meek Milll and Leslie Grace. How does it feel to be bringing all these different cultures together, you being Canadian, Meek being an American rapper and Leslie being a Latin pop star?

It’s really dope to bring everything together. I’m from Toronto, which is a big city and it has a lot of different cultures. I’m very used to hearing Latin music, rap music, different types of music. Coming together with Meek Mill, who’s one of my favourite rappers, and a brand new amazing artist like Leslie Grace, it was really easy for us to get into the right groove recreating ‘Conga’ and it was really fun.

When you were making ‘Conga’, was there was there an “aha” moment, when you realised what you wanted it to sound like?

Well when I was creating the music, I really wanted to just keep it authentic to the original because the original was such a classic and iconic song. So I tried to keep old elements from the original in there while trying to bring a new flavour at the same time. I kept it very familiar so that the fans and everybody would know where we’re coming from with it. It was really just a dope experience working on it with Meek and Leslie.

Is there a process you have when making beats?

You’ve had a really crazy 2020, producing some of the biggest records like ‘Get Me’, ‘Tyler Herro’, ‘Shimmy’, just to name a few. You’re already owning 2021 with ‘Ugly’. What do you think the rest of the year is looking like for Boi-1da?

I think the rest of the year is going to be going pretty crazy. I feel like last year, although I had a lot of songs, because of Covid, everything was new. and it was kind of like a down year for me. But I feel like I’m really going to turn up this year and go absolutely crazy. I have a lot of stuff in the chamber that I can’t wait for everybody to hear.

Over the years, you’ve steadily been making bigger and bigger records, you work with such a wide range of artists. Is there a piece of advice that stuck with you over the years that you take with you into these sessions?

A piece of advice that I got over the years that stuck with me was some advice I got from my dad. He always said, “Don’t just chase the big fish, while you’re here and while you have these opportunities, get everything, do everything you can. Live so when later on in life, when you’re chilling and everything is hung up, you have no regrets.” So that’s how I’m living my life. I feel like that’s the best advice I ever gotyou because, I’m just going and doing everything I can and going as far as I can go. Later on in my life, I can always say, I did everything I could have possibly done.

What’s your production software of choice?

My production software choice is FL studio. I have always used FL studio since I’ve started making music. They say if it ain’t broke, don’t fix it. So I haven’t.

How does it feel to be making huge record breaking tracks? When you were working on ‘God’s Plan’, did you intend for it to go to Drake?

You know, it’s it’s been a real blessing being able to make records and have a record this big and so impactful. I’m nothing but thankful and grateful for everybody and anybody I work with and any song that I make. Especially this one, because it was a milestone for a lot of people. The song itself was already halfway done, I came in on it at the end and basically out of the extra “oomf” to it. It wasn’t a beat that was made specifically for Drake. It was an idea that he already had that I kind of helped him finish.

Are you familiar with Drill music at all with the Brooklyn Drill scene right now? What are your thoughts on Drill music, how it’s come up so quickly, the legacy of Pop Smoke and where do you see it going?

I’m very familiar. Drill music is just amazing. I’ve always been a fan of Drill, even when they were doing in the UK. It’s just very energetic and it just brings a different kind of aggressive energy. It’s been going crazy in New York because, there’s a lot of lyricists in New York and a lot of high energy artists. I love to hear Drill music, man. It’s like it’s really just so new and fresh. Pop Smoke was really the guy that kind of brought it to the forefront. It’s unfortunate that he passed away because I feel like he had so much left to do. But, you know, Drill music and what he started over there lives on. R.I.P. him, I think Drill music is going to be here for a long time.

I know you’re a fan of DMX, what is your favorite DMX song?

Would you consider him one of the artists that you’ve always looked up to or that has inspired your music?

DMX really made me love hip hop. I wasn’t really in love with hip hop like that before DMX came out. So I would say DMX is the guy who really introduced me and put me on to hip hop. I never really had that deep love for a rapper before DMX. He’s like the first rapper I was like a real big fan of.

Do you think we’ll ever see a DMX/Boi-1da collab?

Shoot, I might just have to knock that off the bucket list I’m not even gonna lie.

Are there any artists or producers that you’re excited about right now?

Do you have any advice for any upcoming producers trying to make a name for themselves?

The advice that I have for any up and coming producer is just be yourself, be original, and think outside the box. Don’t be afraid to try something new and bring your own twist to anything that you’re doing. That’s my advice. Just be fearless, you know, be fearless with the music that you’re making and love it.