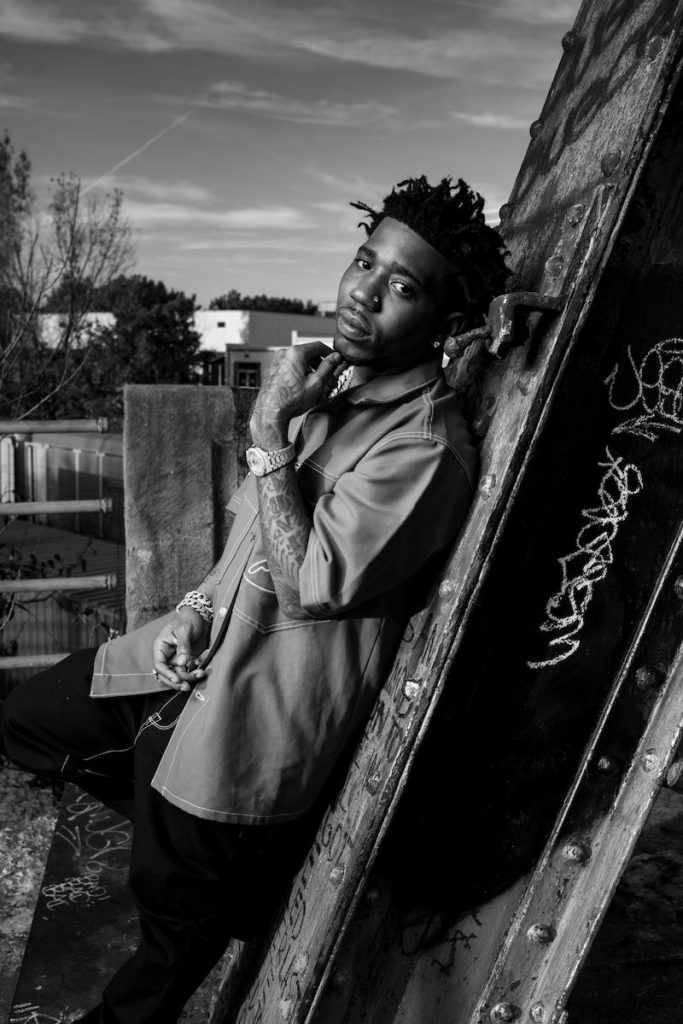 YFN Lucci is a renowned pillar in the hip hop community. A native to Atlanta, GA, his melodious raps and animated persona have inspired artists from coast to coast. In 2017, his song ‘Everyday We Lit’ could be heard booming in every club and at every party. For a couple of years he’s been dating Reginae Carter, the daughter of Lil Wayne, who he credits as a major inspiration.

We talked about ‘Wish Me Well 3’, his personal growth and life in Atlanta. YFN Lucci is currently facing charges for his involvement in a December murder. We wish him a positive outcome with his case.

Before, it was like a crew, it stands for Young Fly Nation. Basically man, we was just homeboys. I just happen to rap. I’ve been rapping since I was young. I finally started to get noticed when I got like 22, 23. I got signed and I made it global.

What’s your favorite thing about Atlanta?

I like Atlanta because you can be yourself here. Everybody got their own personality. We got hustle down here. People know how to get money and shit. The nightlife scene is lit every night. It’s just apart of the culture and the hip hop world as well.

Has Atlanta shaped your sound?

Of course, from listening to artists like T.I., Jeezy, OutKast. OutKast used to sing and shit on their records back in the day. You know, they used to rap about what they go through what they’ve been through, what they did. Shit that make you feel it, what they’ve seen. That’s what I do, that’s the only thing I can do because I relate to that. I know how to tell my story. There’s so many people in the world that somebody gonna relate to what I’m talking about. I rap about my life and what’s going on and I learned from some of the greatest that came from the “A.” They used to tell stories, not just rap about anything.

How does it feel to now have the number one album on the Apple Music charts?

That shit feels amazing man, you feel me. It’s like an award you get from all your hard work. I put in a lot for this album and they’ve been waiting on Wish Me Well since like 2016/17.  I put my my heart, my soul, I put features on there that I grew up listening to. I got Jeezy, Yo Gotti, Rick Ross on there, and that’s legendary to me. I just been grinding, we here.

What does your song September 7th. mean to you?

That’s the day before my daughter’s birthday. Her birthday is September 8th. I was planning for her birthday party and shit that whole day. I went to the studio that night and I did a song. So that’s why I named it September 7th. I love that song. It sums up a lot of what I’ve been through lately, from people changing to going through certain problems to making it out of where I came from to buying bigger jewellery, Bigger chains, and I got bars on that bitch you gotta listen man you feel me. It’s one of those real Lucci song where you can hear my sound, my bars the way I’m talking. You know, thats that ‘Wish Me Well’ Luc.

‘Dope Game’ is one of the more notable songs on the album with Jeezy and Yo Gotti on the same song. What was that session like?

Man, that shit was amazing. We didn’t actually do it in a studio. I had pulled up on Jeezy at a music video shoot with Gotti. After the video, Jeezy and I were chopping it up. He was like, “Man I know you’re about to drop your album, go ahead and send me something.” So I sent him something, Jeezy sent it back in like five days tops. Then I sent it to Gotti with Jeezy’s verse on it and he sent the fire emoji back so I knew he was gonna get on it. Sent it back three days later and we was lit. It’s like they passed the torch.

Why did you choose Mulatto for the ‘Wet’ remix?

Shout out to Mulatto, she killed the ‘Wet’ remix. I really just needed a dope female from the South who was going to talk their shit. That shit is explicit so you gotta to be able to navigate the rap and talk shit. Who better than Mulatto?

What was your process when you first when you were first recording ‘Wet’? How did that song come about?

‘Wet’, I was at Patchwork when I started it. I did the first verse at Patchwork, I ain’t had no beats so he started playing some. That was one of the ones he played and I went to do the first verse and I was like, ‘damn this shits hard’! I went to L.A. like a week later, I pulled it up, did my second verse. I was like I gotta drop this on Valentines. This had to be back January of last year.

How was the video shoot for ‘Both Of Us’?

That shit was lit man. Unfortunately, Layton [Greene] couldn’t make it, but we still had a good time. Shout out to [Rick] Ross for pullin up, shout out to Hitmaka he pulled up on me. I had Reginae [Carter] that turned out dope as fuck.

I just dropped a video, you should go check that out. And I just got a new Maybach. It’s a life down here in the A [laughs]. I got like seven videos off the album that we’re gonna drop and I’m also gonna shoot some more. We’re definitely going to give them a lot of content.

You mentioned that the cover for ‘Wished Me Well’ was inspired by Lil Wayne. Has he had a big impact on your music?

I’ve always been listening to Wayne since I was a young n****. You know, Having your own style, being able to do it all, rap, sing, whatever you wanna do. Creativity, watching him dominate the game for years, I learned something. I learned how to play with words, switch up the flow. I learned a lot by listening to him. With ‘The Carter 2’ album cover, he was standing in front of the Rolls Royce, that was so dope to me, that was some legendary shit. I wanted to do my shit the same way, and my shit was called ‘Me Against The World’. I let Mike Miller shoot my cover. I told him my idea, and we went down to my old houses in my old hood and we took pictures. I liked the one where I was sitting on the truck. It was different from Wayne but it was still inspired, it was in my own style.

You’ve come a long way since ‘Wish Me Well’. What’s changed for you since then?

Shit my money, the way I act. I’ve grown mentally, spiritually. My mind, the way I think. The shit I have. I don’t stay in the hood no more, I live in the suburbs in a gated community. I got a condo. I met Nae [Reginae], Wayne’s daughter. I got a label, I’m a CEO, I got an artist. A lot has changed man, I’ve definitely grown into a successful business man, an entrepreneur. We’re gonna keep going, we’re gonna keep elevating.

Do you have any message for your fans?

I appreciate y’all waiting on me, being patient with me. I’m glad y’all like the project. I’m going to be dropping so much this coming year. I got my own artist that’s going to be so big ya feel me. Shout out Yungeen Ace, shout out everyone who was on the project. Free JayDaYoungan. Shout out all the producers. ‘Wish Me Well 3’ out go get it!