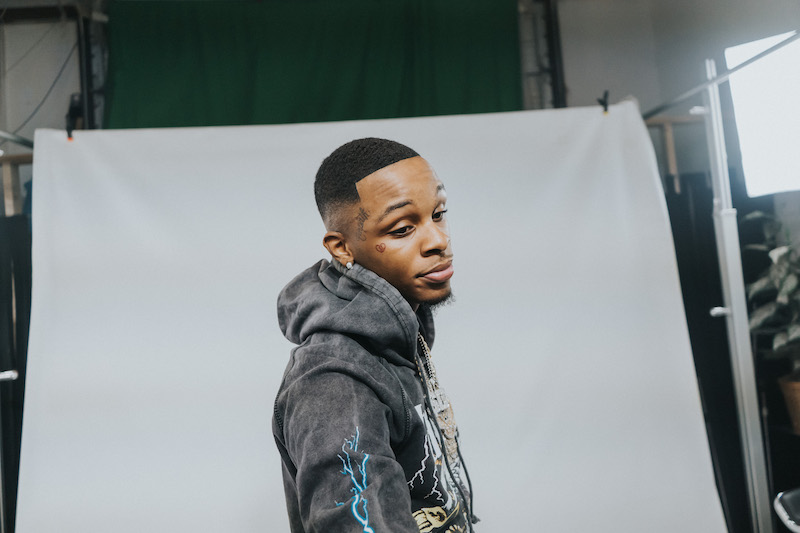 It’s great to meet you Toosii! ’Poetic Pain’ was one of my favourite projects of 2020. Have you been recording anything new while in lockdown?

Honestly I’ve been recording a lot. I just came from Atlanta, I locked in Atlanta for like seven days and I was just recording. That’s definitely been a highlight of the year but other than that, I’ve just been working.

Can you tell us what you were working on?

I actually locked in the studio with Key Glock, I went out with Lil Baby for his birthday, I locked in with maybe like ten different producers. Just working honestly, it was good – it was crazy!

You have a great ear for beats full of heavy baselines and rich production. Who are your favourite producers to work with?

Have you had a whole new wave of fans coming at you?

Whats the craziest thing so far?

There’s been so much crazy stuff, one of my fans sent a letter, like a long letter to my house. I got it out my mailbox, and I read it and she was like “it’s ok, I love you.” She was young too, she was like 13, she was like “I love you” and other stuff, it was a long letter. I’m like, “how did you get my address? What’s going on?” That was probably one of the craziest things, ‘cause that’s scary.

Despite being potentially stalked, you’ve had a big year. How have you stayed positive through it?

Honestly I just continue to work, I knew what was gonna come out of it. That’s all I can do – know the outcome. I feel like I create whatever I want my happiness to be. So if my happiness is getting plaques, then only I can work towards that to better that, you feel me? I want some plaques so that’s all I been working on. I can’t let this stuff on the outside deter me from that.

You’ve become the go-to guy for features this year. Do you agree?

You’ve been treating us to a lot of visuals for your music too, is ‘Met In LA’ the latest?

‘Met in LA’ was maybe like two or three videos ago but it wasn’t a long time ago though, it’s just I drop so much. I drop a lot, I drop almost like every week.

Your song with Lil Durk was a huge standout, you two sound great together – will you release more tracks together?

Yeah most definitely, me and Durk actually have a relationship, I feel like that’s why the music came out the way that it did, honestly. Because I can’t work with anyone I don’t have a relationship with. But Durk was one of the first people to bring me out, bring me out on stage, like  really take me in. I feel like that’s why the song came out the way that it did. When he made the song, he made the song when he was in Atlanta, and he called me like “pull up to the studio,” I pulled up to the studio, he was like “listen to this,” I’m like, “it’s crazy, so when we shooting the video?” Then we get the logistics handled, put it on the tape, it start doing what it do then everything happened the way that it happened. But to this day we still been talking, I just talked to Durk a few days ago, you know. One of my people passed, he text me to check on me, so the relationship’s there, that’s why it’s good music. But to answer your question, yes we do have more music coming fo’ sure.

You worked with DaBaby at the end of 2020, was that the first time in the studio?

Yeah but I was actually on tour with Baby three times, yeah I been on DaBaby tour three times ‘cause we both signed to South Coast Music Group which is a Carolina based label. But this was the first time we actually worked together.

I can only imagine what a Toossii x DaBaby tour is like! Is it wild?

Like I won’t lie that was just a crazy tour, it’s exciting, you never know what you gon’ get at the show, you might have babies running around on stage, I’ma crowd surf. He gon’ come with a performance, a show but I’m crowd surfing, I’m throwing water – you just gotta know what kinda crowd you’re getting yourself into. I might go to a DaBaby show and crowd surf or I might go to a Summer Walker show and sit and engage with the fans ‘cause I was on tour with Summer Walker, you just gotta know how to react to different crowds, you feel me? but a DaBaby, Toosii tour, that’s nothing but excitement.

Your sound varies between singing and rapping a lot.

It’s more of a melodic tone, I guess you could call it harmonising, that’s all it is.

The sound balances so well on ‘Poetic Pain’ with complex lyrics blending with melodic vibes. Is that hard to do?

Nah not at all because I started off rapping, I just got a melodic voice so doing something like that was just something I wanted to try, I started off rapping rapping. I didn’t even used to make melodic music, singing or things of that nature so I don’t know, it’s just something I wanted to try and I noticed that I was able to express my feelings a little bit more like that so I kept following that path and kept going like that now this is what came out of it.

You lived in New York before moving to North Carolina, do you feel equally influenced by the sound of both states?

A lot of people say I’m like a perfect balance between New York and North Carolina. I get that a lot, I’m definitely glad that they do both influence me for sure.

How did moving to North Carolina at 13 change your sound?

I was still back and forth from New York to North Carolina so it didn’t really influence me too much, like I was still rapping at that point and then there was a time when I was just in North Carolina for a while. I won’t lie, I hadn’t been back to my hometown in like three years, so honestly there was a point where I just locked in and I started to get a little bit country. It got crazy I couldn’t even run from it no more, now this is what happened.

Your sound is ambiguous, you could be from a lot of places…

Yeah a lot of people think I’m from Atlanta, I’m not from Atlanta though. I think being popular and living down south, people instantly think you live in Atlanta when you’re a rapper and live in America. But nah I’m from Syracuse, New York and I live in North Carolina. People be like, “why you move to north Carolina?” Uh, I was 13 and I had no choice, I can’t tell my mom I’m not going!

Do you think in some ways it’s easier to break into the rap scene in North Carolina?

Nah, because in New York, when New York mess with you, they rock with you, you feel what I’m saying? When New York rock wit’ you, they rock wit’ you. But in North Carolina, like, nah you’ve got to get them to really like you out here. Because in New York there’s gangs, it’s bloods, crips and stuff like that yeah, but they don’t really care about bloods, crips, they don’t care about none of that. Whatever area you from, that’s the area you from. When you from an area, you got a whole side that support you, and when you got a whole side that support you you like, “alright I already got this on lock” all they gotta do is tell a person to tell a person and it’ll spread, in North Carolina it’s like, alright so you got bloods, crips and if I’m a blood and you a crip, we don’t like each other, it’s like nine times out of ten we don’t like each other, you know what I’m saying? And it’s more than just being an area, it’s like, I gotta tell one person and they gotta tell someone – it’s slower. In New York, I could have this whole area push me. It’s a little bit harder in North Carolina fo’ sho’.

And people sometimes jump on any new artist from New York so building a fan base is easier.

You’ve got a Drill song with Fivio Foreign. When you’re making a Drill song, is it a different vibe and approach?

I turn up, it’s nothing – I just make music, I like making music you know so I feel like there’s nothing you should put in front of me that I shouldn’t be able to do. Or put my own twist on it at least.

Have you checked out the UK producers that some Brooklyn Drill rappers use?

Nah I haven’t tapped in. But I got a lot of producers from the UK that I actually use. You’d be surprised how many UK producers American artists use. Really most of the producers that we use that come from YouTube and stuff usually come from the UK, it’s crazy. I never really listened or worked with a UK artist though, you gotta point me to the best one. Point me to the upcoming artists.

Have you ever found a Toosii Type Beat on YouTube and been into it?

Yeah ‘cause they actually do be sounding like me. Like some of them be sounding like ‘Yo! Where’d you get this from? Is this from the music I put out?” They’ll put “Toosii Type Beat” and then they’ll put a guitar on it, ‘cause everybody know I love guitar…

What can we expect next from you?