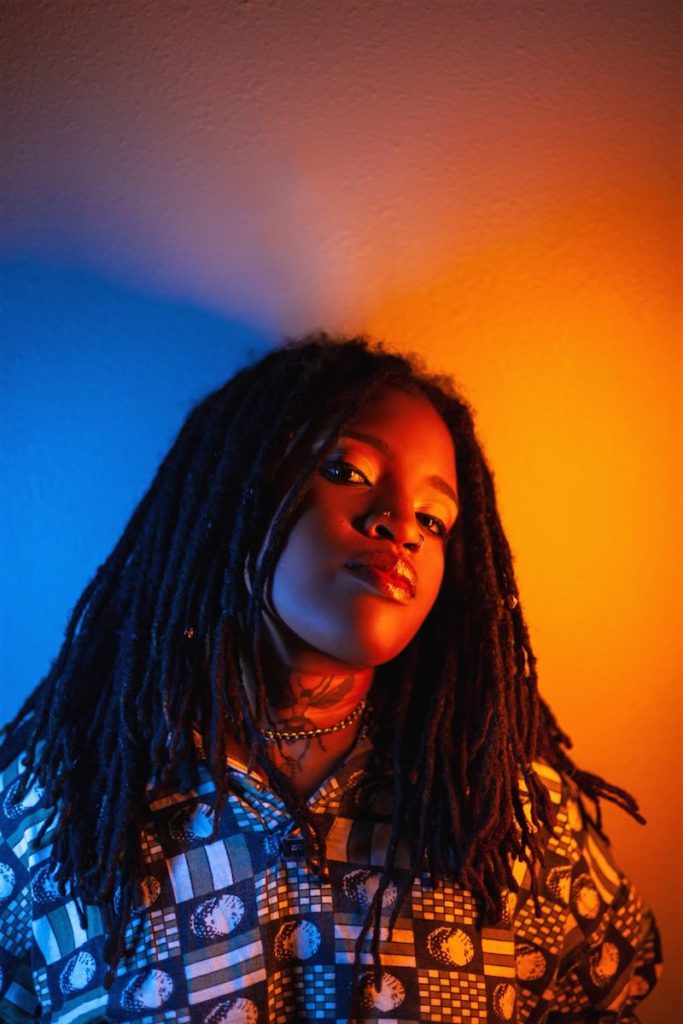 Ambré is one of my favorite singers in the game right now. She first caught my eye when she released No Service In The Hills featuring Kehlani, but she really pulled me in when she dropped her album Pulp in 2019. Two time grammy nominated for her songwriting for H.E.R. and Chloe x Halle. Last year her song Revolution was featured on her label’s project, Reprise: A Roc Nation Album. We virtually linked up with Ambré last month and spoke about the release of her new songs, Pulp, and studio rituals. Stream The Catch Up, and Alone, and be sure to stay in tune with her in 2021.

Where are you based right now?

Based out of L.A. I’ve been in L.A. for about three years, going on four.

What was your mind state when you’re working on ‘Pulp’?

Hmm, my mind state when I was working was a lot of different things because that project, it took me a while to make it because I was in between so many different situations. I was like, I need to get out. I need to find somewhere to stay, get my own apartment and my own bed. There was a lot of hunger behind me getting that project done and finding a home for myself as a recording artist and having some type of backing when I was ready to put it out. Creatively, my mindset was more in a sense of like, I wanted it to sound very youthful. I wanted it to be nostalgic in a sense, because a lot of the songs are about like my first experiences in life and those times when I was in high school. That feeling of being young and confused and energetic and curious about a lot of things.

I’m obsessed with movies. I feel like one day I’m definitely going to be a director of some sort, like I’ll be making my own movies. But for now, my movies are my albums, my EP and stuff. I always think of myself as a director. When you get a DVD for a movie or whatever and there’s the extras, the Director’s Cut is the longer version with the extras deleted scenes. So I kind of wanted it to be a play on that concept of being a film, and the extra songs being the deleted scenes.

I was a really big fan of ‘Reprise’ the Roc Nation project. What was it like working on ‘Revolution’ with Buddy and D Smoke?

I started this song in like 2018 I believe. I was in Toronto with this group called Keys N Krates, they do electronic music. We started that song out there. When they told me they were working on this project, I went back and listened to that and I was like, “Oh that shits fire.” I sent it to Buddy. Through text and he hit me immediately. Like “Yo I’m about to record this right now,” and he sent it back ASAP. It happened digitally. I had met Buddy a few times and we had a certain chemistry, so it was cool. D Smoke, that kind of happened without me knowing but when I heard it I was like, “Wow this is dope.”

What was the session like for ‘Alone’ and ‘The Catch Up’?

I don’t remember, it was a blur honestly. I think it was in October or something like that. I had a session with Louie Lastic, this producer i’ve been working with a lot. Me, him and my friend Dustin. This amazing writer, artist as well. We was just vibing, we was working on something else at first. He played the drums and I was like, “Oh we should do something with that.” And we just started working on that joint. Finished in one night I’m pretty sure.

What was it like working with Hit-Boy, is that something you did in person or was it virtual?

We did it in person, this was definitely before the quarantine.

Did Smino pull up too?

Not that day but I sent it to Smino after.

When you guys were working on the song, did you have Smino in mind as a feature or was that something that came afterwards?

That’s definitely something that came afterward. That was my first time working with Hit-Boy and creatively I think we just hit it off instantly. So he played me that and I was like “Can you slow that down a little?” So we slowed it down and pitched it and played with it and thats what came out. I sent it to Smino and he sent a verse back ASAP.

What does it feel like to be nominated for yet another Grammy?

Feels good. I mean, it kind of don’t feel like anything to keep it a buck with you. It feels good, like I’m excited but it’s not something that I think about a lot. I am proud of it of course, and I’m happy to be apart of something like that. I just don’t really think about it that much. I don’t think I would if it was my project either. I’m just kind of floating around, you know. In the moment when it first happened, I was like, ‘oh this is dope’, and then the moment passes. I’m trying to be present.

Who would you say is your favorite female emcee right now or singer?

I really liked ‘Preach’ and ‘No Service in the Hills’ with Kahlani. Do you think we’ll see another collab between you two?

I mean, I definitely think I’m going to do some more music with Kehlani in the future, but I feel like it might not be on the same vibe. It’ll probably be more like classic RnB or something like that.

In what ways have you changed since your first album and since 2015, 2016 when you first started releasing music?

I think I’ve become more open with ideas and stuff, like I’m willing to try a lot more things musically. I listen to a lot of different stuff that I didn’t back then. So I think I’m more open with my ears. I’ve grown as a person, like I’m older, have more experiences with stuff to pull from. I’m a completely different person than I was because I was 17 when I released my first song. Come a long, long way.

Have you been spending a lot of time in the studio?

I’m back and forth between studio and like a home set up. I’ve been in New Orleans pretty much this whole month of December. So I have a studio that I go to out here. But when I’m home in L.A., I got my little set up at home but I also have a studio that I got to. Just depends on the vibe of the day or if I can get someone in the studio with me.

Do you have a ritual when you’re recording?

I don’t have a set ritual, but I basically just feel out the vibe of the room and stuff. I like to usually record in darker spaces, unless there’s natural lighting. Other than that, I like it to be kinda dark so I can take myself somewhere else. Ya know, candles and incense that whole vibe. I’m very chill, all the time.

Do you think you’ll do any live streamed/virtual shows?

Yeah, I think definitely at least one.

What are the things that’ve been getting you through the pandemic?

I’ve been watching a lot of shows that I didn’t have time to binge before. I binge watched the whole WestWorld and all the seasons of a bunch of different shows. I just been trying to find new little hobbies to get into now that I have a little extra time because I’m not traveling and such.

Do you have any tips for anyone that’s struggling during this pandemic?

More music, more visuals, crazy visuals. I’m trying to really step up my video game this year, so I’m finna come real crazy with the videos and stuff. Hopefully the world will be ready for tours again soon and shows, I miss performing. It’s a different kind of energy, I love concerts even when I’m just going.

Picture by Jamie-Lee B.