Take a photo, It lasts longer… We can explore a whole lot more than expressions through images, cultures, even whole communities. Something that young London creative and film photographer Todd Duncan (@filmbytodd) can relate to. Viper now allows you to explore “Todd’s world” exclusively through a full interview by our Fashion Stylist & Writer James Loach.

So, We’re joined by film Photographer ‘Film By Todd’, For those that are yet to be acquainted can you tell us more about yourself and what it is you do?

I am Todd Duncan, 24, from A small town out of London. It’s still a question I ask myself as I’m going along the journey, I love capturing images and also love the direction of videos but at this point, I would rather just call my self a creator because I’m finding myself trying new things and just testing waters.

What would you say initiated your ability to become a photographer? & Why 35mm film?

as a kid, I always enjoyed watching music videos especially old school hip hop and rock videos and I always paid attention to the aesthetics in the video and the visuals. I always appreciated images in general from the likes of Chi Modu to Mike Miller who took pictures of rappers in the late 90s and I guess seeing their work from a young age has inspired me subconsciously.

It was only 4 years ago I picked up a camera that I found in a charity shop, before that I never knew I wanted to take pictures at all. Watching people like Ciesay of p+f shoot on 35mm film really inspired me to start creating my own work because it gave me that nostalgic feeling I was into as a kid.

Would you say that film photography has allowed you to transcend into other creative realms?

Yes for sure, I feel, as a creative you are always trying to elevate and find the next avenue for yourself to create so I think it naturally pushes you towards different things. Also watching friends who are in the same industry can inspire you to have a go at new things

You got up close and personal with Gunna, Quavo, Take Off, Rich The Kid all in one night. Tell us about the whole night?

It was really surreal that rich the kid hit me up and was showing love because I have always been a fan of him. When he came to London we linked up and I shot his performance at 02 Brixton which was a really good experience. And it really makes you know that anyone can be appreciating your work and you don’t know about it.

When I captured pictures that night it was really spontaneous because my guy daps messaged me to come to a party but I had no idea they were going to be there and from daps working with this artist he introduced me and I had the opportunity to take pictures of them. So big up daps always for that

What do you think attracts your talents amongst the likes of M Huncho, Octavian, Headie One to name a few?

I feel like them artists, in particular, have a unique and creative style and they can appreciate what I’m trying to do and I never try to push it in people’s faces I just let things happen very naturally.

Whose work would you say you admire most? Any key players you’ve looked up to?

Ciesay, from places + faces, Chi Modu. Are for sure big inspirations to me, both of them have completely different styles but have things that resonate with me and made me want to try film photography.

If you could describe your photography style in three words, what would they be?

Just the ability to be able to create and really just live inside my mind and put once ideas that I have had in to works to make something visual for everyone to see.

Todd’s World. That’s the name of your latest films, can we call them films? Anyways, tell us about the episodes of Todd’s World?

The episodes really came about because I want to give people a little more of an insight of the things I and my friends as creatives do and just having fun with it. I really want this to be something people will look back on in the future and feel inspired. I can see it developing naturally as each episode goes along.

What can we expect from you for the rest of 2020? An Exhibition maybe?

I’m in talks about collaborating with a designer on a photo book which is something I have been holding of doing for a while because I haven’t felt I was ready to do, but I now feel like I have a lot of unseen photos that I want everyone to see.

But I think an exhibition is something I will be doing this year hopefully.

Lastly but most certainly the most important question of all, If there was an animal you feel like you’d best suit, what would it be?

Mans a meerkat because I clock things from far and stay in a close group at all times. 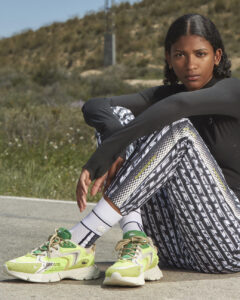