Realistically, I didn’t really listen to any of the mainstream mixtapes that were coming out when I was in my teen years. I was into underground stuff like Three Six Mafia, but what really stood out to me, and it wasn’t really a mixtape was a beat tape series called Special Herbs by MF DOOM, which went from 0-9 across three CDs.

That has the biggest influence on me as a producer. I remember my boy Micah Freeman (from Awful Records), who got me into music and rapping, had pirated a few of the discs and we were listening to them, and this girl bought him up the actual disc set, and it changed my life. Down to the way that I still produce these days and the way I chop samples.

We would ride around to Special Herbs only and the 90-100 beats he put out altogether. There’s so many of them but, over the years, you would still find something you didn’t hear before and be amazed by the crazy sample. Like, who would have thought to chop this particular one up and make a beat out of it? I think that had a bigger impact on me, as far as having fun with music and wanting to find where a sample came from, and being able to create something that doesn’t even need words.

The first time I heard Special Herbs I was in Micah’s den area in his mom’s apartment one day after school. He was like “yo, the MF DOOM guy makes his own beats as well”, and he had just put me onto DOOM, so I was fascinated by it and wanted to learn everything about him. He’s so enigmatic, and we just sat down and listened to a few of the beats and they were just crazy. I ripped it from Micah’s iTunes, went home, sat there, and just immediately felt it helped me become a better producer and rapper. We recorded some of our very first demos over some of those beats, and they just have a very special place in my mind.
As far as making beats, not being afraid to experiment with a weird sample and finding a way to make that work, and really just life in general, Special Herbs had a really big impact on me. I was making beats before I heard it but I had only just started. I think I was 16 or 17 at the time and the beats I was making were pretty shitty! But then I started listening to Special Herbs and it helped me almost reinvent myself and find a direction I wanted to travel in. 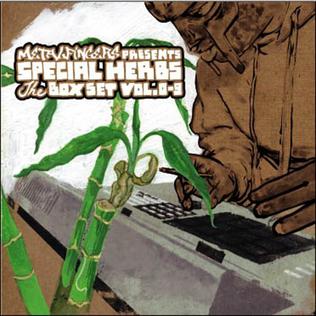 The thing about Special Herbs was that all the beats were very offset; some of the drum patterns were weird as hell, offbeat and un-quantized. The way he did that helped me find a specific way to do things, so that people would listen to something I’ve done and think “that’s definitely Ethereal.” When you hear an MF DOOM track, and it could be a beat or a song, you definitely know that its tailor made for him.

As I began to understand music a lot more, I decided I wanted to make something different to the snap era in Atlanta and the mainstream stuff on the radio. I grew up on old funk records that my mom played in the house so I always had an ear for sampling. I would hear an old Anita Baker song and wish I could loop it and put some drums over it.

I became fascinated with DOOM and, digging deeper into his past, I discovered he used to rap without the mask but went through his brother’s death, which pushed him to becoming this other artist. Coincidentally, the same thing kind of happened with me; I was going in a certain direction with music and trying to figure out how to make it move. Then my mom passed away from cancer when I was 19 and I feel that was reminiscent of what DOOM went through.

Looking at the covers of all the CDs, you can tell that Special Herbs is a series and that there’s continuity to it. The tracklist alone is all kinds of different herbs and I would go on Wikipedia to see what particular herb was for a song I liked, and how it connected to the beat. They really made me feel like I was listening to a catalogue of things from a mad scientist.
I eventually bought the three-disc collection but I lost it a few years ago, probably during a move or something. I’m definitely going to get another copy though for sure – I got to rebuild my ‘music collection’!

My favourite beat out of all them is one called ‘Vervain’, which is a Gil-Scott Heron sample. That’s one of the beats where it took me years to figure out where it was from, until I listened to it and it clicked. Like, holy shit! I know where this song comes from. This man is a genius, just for how he put the pieces together. Crazy!

It’s tough to narrow down Special Herbs in three words…really hard! But I would have to say very, very nostalgic, just because of the samples he used. They are what my mom used to play or what I would hear on the old school radio. It’s so subtle as well; most of them are just in a loop, and they’re not even cut in any certain way. It’s almost minimalist in its approach; there’s not much going on with the beat but there’s something about it that makes people want to sit down and listen over and over again.
Honestly, I would pay upwards of $100 for Special Herbs, because I’m a real DOOM fan and his printed stuff is so hard to find. That’s a fair amount for upwards of 100 tracks and you can look at it and tell it is something special in hip-hop.

Catch Ethereal, along with the rest of the Awful Records family, performing in London as part of the Red Bull Music Academy Tour tomorrow.