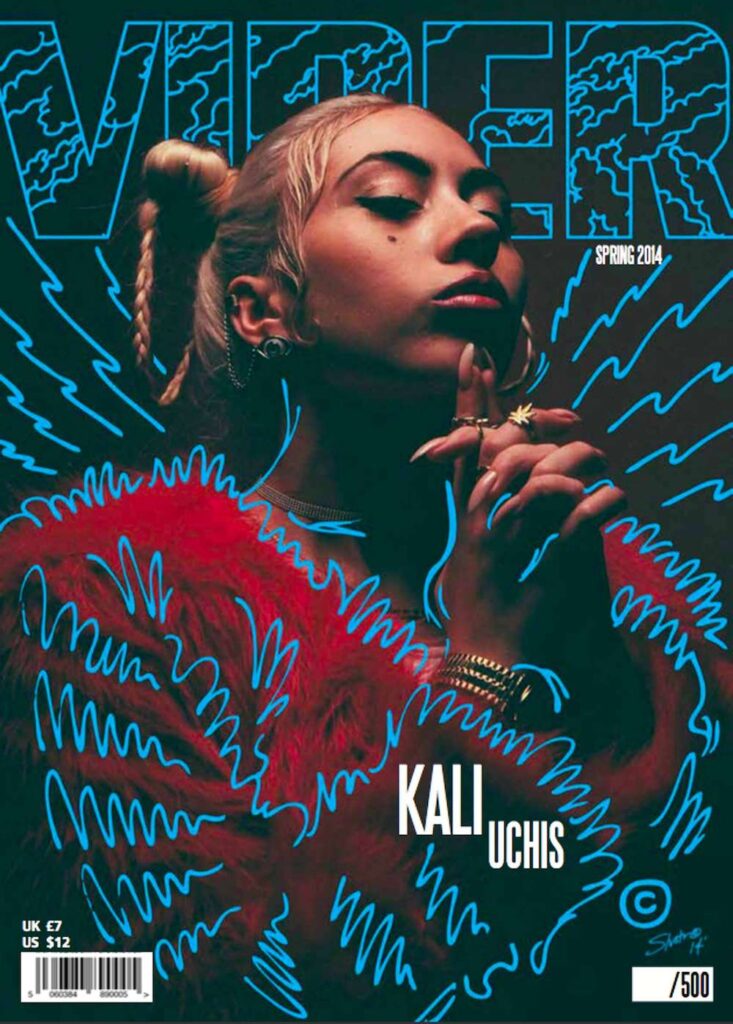 In the world of popular music, it often seems like there are two opposing types of female artist. You have the mannequin-perfect, triple-threats with the skills to break into a choreographed dance routine without breaking a sweat. And then you have the women that curse, drink, say outrageous things in interviews and tell you who they’re fucking. The latter are far more interesting. They’re real characters, complete with scars and stories, often poured into the lyrics of the songs they sing. Look at Amy Winehouse, M.I.A., Madonna and Adele.

It’s been a minute since such an icon has shown up in the music sphere. Or at least one that has the personality to captivate a whole generation. More recently the mannequins have been behaving like bad girls, trying to fool us into thinking they’re the latter. Yes, you Rihanna. We love the way you roll a blunt on a guy’s head but we wish you could write your own songs. In this climate, it’s no surprise that Kali Uchis is about to be the next big thing. After releasing her self-produced debut mixtape, ‘Drunken Babble’, the 20-year old caught the ear of a number of industry kingpins, including Snoop Dogg and Diplo. And though she looks like she could be a manufactured pop princess, dig a little deeper and her haunting voice and reckless abandonment will leave you dazed. Get lost in her world and you’ll feel like an extra from Pleasantville that’s stumbled into Reefer Madness.

Some assume Uchis is going to rap when she opens her mouth, but she sings like Cory Daye from Dr. Buzzard’s Original Savannah Band. Her vintage musical influences are evident in her music, particularly her song, ‘Table For Two’, which could have been released the same year as The Flamingos’ ‘I Only Have Eyes For You’. Having grown up in Virginia, her early life in Colombia has instilled a great independence in her. Her lack of desire to fit in has served her well as she idolises mavericks of the music industry, from the aforementioned M.I.A. and Amy Winehouse to to Gwen Stefani. Her biggest idol of all is Billie Holiday, who Uchis notes died on the day the day she was born, decades prior.

Kali’s the girl you want to be. Or the girl you wish would simply look at you, let alone turn down your advances – probably with a middle finger raised. Cher Horowitz, if she wasn’t a poor little rich girl, but a feisty, weed-smoking, gun-toting bad girl. In fact, she makes Cher look like a prissy daddy’s girl. And though Kali Uchis is the nickname she inherited from her father, you’re more likely to find her singing about sneaking out of her parents house at night. With that said, she displays a closeness to her father. One of her tattoos is his signature from his first passport, used when he moved to United States from Colombia.

How would you describe your music?
I don’t know. With my new songs, it seems like every song is not even a real genre because I take inspiration from so many different types of music that it becomes weird. I love the new music, I like it more than my mixtape. I know it works but it’s not really any type of genre. I guess the singing is more soulful but then the rapping… I wouldn’t even call it rapping. Like M.I.A, she doesn’t really sing or rap, she just in a melodic way puts her words into motion and rhythm. Lily Allen does it sometimes too. There are a few female artists that do it but it’s a weird thing to describe.

You released a teaser video with your new music, is ‘Por Vida’ going to be an album or an EP? What are your plans for the future?
I’ve had it done for a while but I’m just working on more and more songs. Right now I’m kind of confused about what direction to take it in because so many people have wanted to come behind it and try to sell it and turn it into a label situation, but I kind of wanted it to be free. With my first mixtape, I just put it together myself. As my first body of work I wanted to release it for free and not have any income behind it. It’s not going to be an EP, I think there will probably be 17 songs so it’s going to be pretty big. That will probably come out in January, I just don’t know what it will come under. I’m in a transitioning period right now – I’m getting ready to sign with someone so it might come out under their group.

When do you think you’ll release ‘Por Vida’?
I really can’t say for certain. Springtime will probably be sweet for that.

Who have you been working with since the release of ‘Drunken Babble’?
So many amazing, talented people have reached out off the strength of my homemade mixtape and videos, it’s a blessing and an honour. A$AP Rocky, Snoop Dogg, Chris Braide, Diplo, Tyler the Creator and I’m also working closely with Bunx Dada formerly known as JFK.

You recorded ‘Drunken Babble’ on GarageBand. How did you set up the recording process, were you in your bedroom?
I was in my bedroom, sitting on my floor, singing into a Yeti mic that I bought from a friend of a friend.

Who produced the songs?
I did it entirely alone, I used samples of songs I loved, looped them and did all the production myself for all vocals. That’s what seems to really intrigue people, that I’ve been doing everything completely alone. It’s nice that people notice I’m not a man-made machine.

Have you experimented with production at all?
Before I chose to use samples for everything on the tape, I actually had started making my own beats on an Akai at a friend’s house. One day I brought this girl over to vibe while I was making music. A lot of people were over but it was just us two in the studio, then the friend busted in and started accusing us of stealing some shroom pills that he was distributing out of his house because apparently they disappeared out of the studio. So anyway we got into it over that, it escalated pretty quickly and the falling out was strong enough that I never spoke to him again. He can sell those beats in a few years if it makes him happy. Anyway, my songs come from the root of my inner subconscious so randomly I’ll hear melodies and verses or chords and I’ll jump over to my keyboard or record an acapella. I work very closely with whoever’s helping me produce a song. Once I have the proper funding I want to do all of my own production.

You direct your own videos. Where do you get your visual inspiration from?
I love films and I love music videos, I brainwashed myself growing up with excessive cinematography. I can’t pinpoint what’s inspired those videos, it has to be some strange mutilated smoothie of a billion things I’ve seen at points in my life. Mostly I’m inspired by dreams, I like videos to be like that. Not really make sense all the way or be sequential but make you feel something and take you somewhere.

How does it feel having done much of your work organically or by yourself?
It’s an amazing feeling to not be afraid to stand on your own, it’s a sense of independence that no one can take from you. I only hope that it will inspire more people to be freethinkers and open their minds to the possibilities of tapping into their own endless potential, instead of relying and depending on others to make things happen for them. I may not be where I want to be but I’m blessed to have gotten where I am within the year I’ve been working on music. I got here by being myself, I would rather fail being original than succeed in imitation. That was never a hard decision to make and I never once questioned myself on who I wanted to be or how I wanted to sound. I had my sound, look, brand, everything on my own because it’s who I am. I genuinely love to write, make music and direct. I would never insult God by not utilising the talents He gave me.