[MAGAZINE] LUCKI ECK$: THE LIFE OF AN OUT$IDER 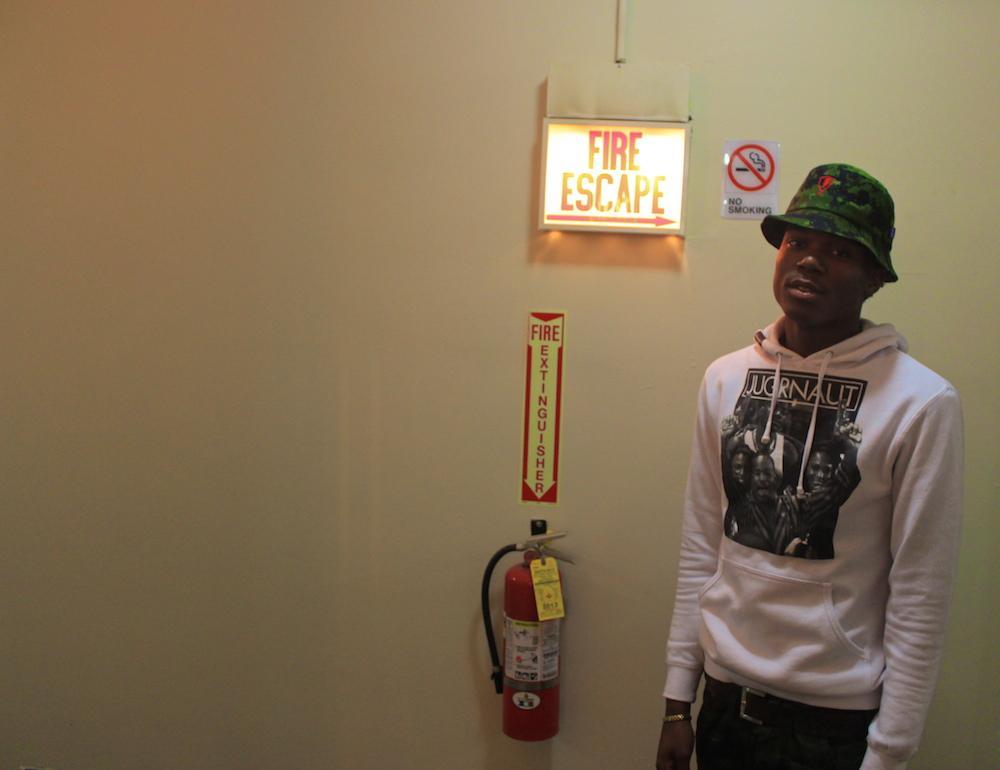 Anyone with an Internet connection and a voice can release a song. How do rappers stand out amidst the constant competition?

Lucki Eck$ prepares a blunt inside a tiny room at Chicago’s Rosemoor Hotel. A manager sitting behind bulletproof glass buzzed me into the hotel, the home of Hippie Dream, an in-house producer for the rising rapper. The third floor hallway, forever reeking of old cigarette smoke, contains the front door of the apartment. In Hippie’s room are two desks: one covered in blunt roaches, the other with a laptop hooked to a flat screen television. With the beat-making program Fruity Loops on both screens, Hippie and Lucki are hard at work on a new instrumental for the latter’s upcoming album, ‘Eck$ism’.

Creating a reworking of Juvenile’s 2004 classic ‘Slow Motion for Me’, Hippie has turned the track’s smooth guitar into a slow-motion groove, transforming the requested sample into a hazy, opium high. Hippie Dream’s production is known for its mellow tempo, a style that compliments the rapper’s flow. After all, it was Lucki who requested the sample.

Since dropping his first project, ‘Alternative Trap’, back in July, Lucki’s buzz has been spreading like a new street drug. The project is not just another project by a Chicago teenager (Eck$ only recently turned seventeen), but a new branch growing on the hip hop tree. With beautiful melodies and original rhythms as the backdrop for quick-witted wordplay about drug-dealing, ‘Alternative Trap’ is a product of trap music and cloud rap; a product of producers who listen to both Beach House and Lil Durk. The result is a series of drugged-out, sleepy mumbling verses of genius over instrumentals that sound like they came out of a Spike Jonze film. Like on the opening track ‘Count on Me II’ when Lucki raps: “I keep ‘em hooked and hungover, I’m the drug dealing closet.”

‘Alternative Trap’ combines the strong personality of Lucki with the abstract styles of Chance the Rapper and the Chicago street struggles of Chief Keef, creating a sub-genre of hypnotic, meditative rap that begs for more listens. The new sound was born in the mind of a kid sitting in high school taking his English homework assignments seriously, while envisioning dreams of a rap takeover like the ones he had heard about throughout his city. Rappers like Fredo Santana and Rockie Fresh, King L and Young Chop. But Lucki doesn’t want to sound like other rappers. He knew that even before he began, a rare feat for such a young artist.

Producer Plu2o Nash tells me he started sending beats over to Lucki back in the fall of 2012. “He wasn’t comfortable [rapping over] the trap beats. He was really trying to start a sound no one heard before.” Having produced three tracks on ‘Alternative Trap’, Plu2o is assisting even more with ‘Eck$ism’. He says that ‘Interest’; a minimal beat that sounds like a sewer chase in slow motion, was the first track that Lucki approved of. When asked his thoughts on ‘Alternative Trap’ being not just a mixtape but a new genre, Lucki says, “You just feel what’s you and what’s not you.”

In October, the teenager dropped the first single for ‘Eck$ism’, ‘Want More’. After only a week, the track had reached 10,000 plays on SoundCloud. At that point, music videos ‘Love It’ and ‘Everything Out$ide’ had generated over 50,000 views. Despite his half-asleep, monotonous flow patterns, Lucki speaks quickly. If you don’t listen closely, if your mind is somewhere else, you’ll miss what he’s saying. On top of the speed, his slang, also apparent in his songs, is hard for outsiders to pick up. For example, after removing a joint that was in the microwave for twelve seconds, he explains to me, “If you fufu a blunt, it’s gonna make it pearl.”

Like his speech, Lucki’s body stays restless. His huge, child-like eyes move just as quickly as his words. He’s a monstrous melting pot of influential hip hop, a teenager draped in tie-dyed hoodies and camouflage. The rainbow and floral patterns represent the psychedelic waves sprouting throughout rap: a direct result of artists like Clams Casino, A$AP Rocky and Flatbush ZOMBiES turning today’s rap shows into blunted acid parties. The camo represents the militant mindset of the (aspiring) gangbangers, dealers, trappers, plus the lives of handguns and probation officers demanding drug tests. Like most kids his age in Chicago’s public schools, Lucki is a bridge between drill and expressionism; he has friends that tote guns and he has friends with pockets full of mushrooms.

As the air dances with smoke in the small hotel room, Hippie plays the first draft beat and Lucki instantly tells him to speed it up. “Is it finished yet?” he asks impatiently, eyes fixed on his iPhone. “Well we ’bout to finish it,” he continues, even before receiving an answer from the producer, “I’m on a roll, dawg, you don’t understand!” No one disagrees. Lucki is days away from his first headlining show. They’re calling it ‘Everything Alternative’, with Lucki and three of his close friends/fellow rappers opening for him: Monster Mike, Mic Vic, and Wteve Baker. The group fall under the Out$iders Clique moniker; a group of rappers, producers, and directors, many of whom rep’ 48th Street, South Side Chicago.